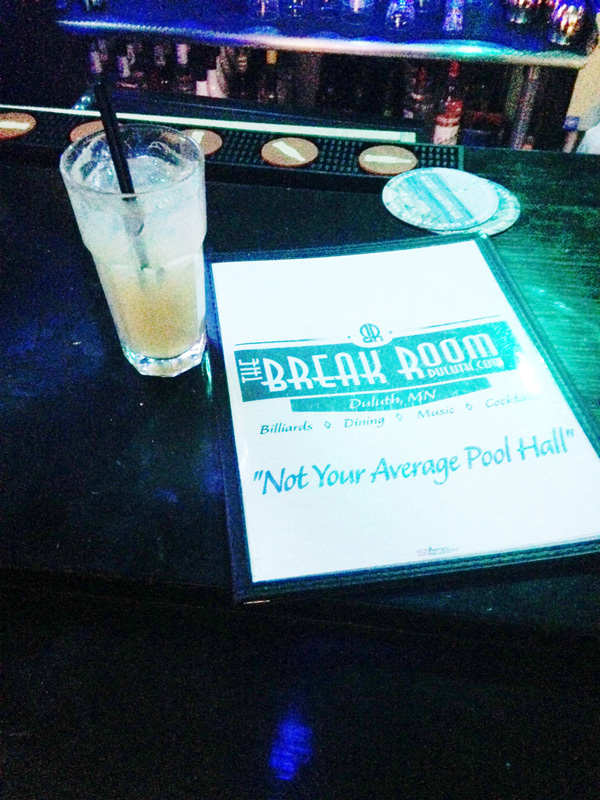 The Break Room claims that they’re “Not Your Average Pool Hall.”
It fair to say that with a menu that includes flatbread pizzas, sliders, and hoagies, a full bar with drink specials most every night, live music on some weekend nights, and a shuttle van that will not only drop off but even pick up, and of course several pool tables that appear to be in nice shape, the Break Room is a great improvement to what used to be the Twins Bar. I stopped in to see what kind of cocktail the bartender might come up with.

Featured Bartender: I was served by Hillary. She has been bartending for almost two years, with some bartending at Ace’s on First before coming to the Break Room.

Interests and Activities: Hillary does burlesque performances with the Duluth Dolls. Their next show will be a Halloween performance at The Rex.

Favorite Music: Hillary likes to have 90s rock on at the bar. She enjoys the synthpop group Austra and also the jazz/swing work of Postmodern Jukebox.

Featured Cocktail: Hillary explained this as a sweeter drink and it doesn’t have a name. It was explained as a raspberry vanilla upside down cake. It has vanilla vodka, Chambord, pineapple juice, and a splash of soda to calm down the sweetness levels. It is served in a tall glass with ice.

How is it?: It’s probably for the best that this drink got a little bit of soda in it. It’s not the sweetest drink I’ve ever had, but the Chambord and pineapple certainly drive the flavors in a pretty sweet direction.
A splash of grenadine or anything else sugary might make it a little much. It’s hard to detect the vanilla in the drink, but I think it plays on the pineapple giving it an almost cream note. This drink is probably good for people who don’t like the taste of alcohol and isn’t overbearing in that aspect.