Tearing Through Genres with Hanging Hearts 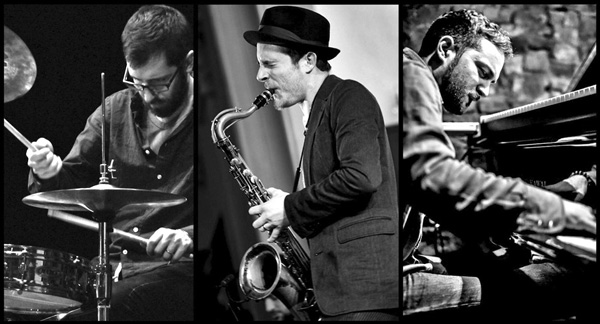 On Saturday, October 15, the Minneapolis based experimental electronic performer Dosh will be playing a show with the experimental jazz trio of Chris Weller and the Hanging Hearts out of Chicago at Red Herring Lounge.
We received a self-titled CD and gave it a listen. The trio consists of Weller on tenor sax, Cole DeGenova on keys, and Devin Drobka on drums. The three met at Berklee College of Music and went on to create music that is based on jazz, but from there sets out to create a very dynamic and broad range of sounds. The album twists from more traditional jazz that reminds one of a department store, to seductive saxophone that lightly plays on the ears, to pure chaos and noise that can only be called avant-garde rock of sorts. Needless to say, there’s some complexity to this group and they keep things interesting through the stages of their music. It’s bold and in your face one minute to laid back and peaceful the next. It’s like you went to walk through Macy’s and stepped into a Sonic Youth-esque concert in a dark speakeasy and then out into someone’s saxophone recital at an arts center.
We got the chance to speak with the band’s founder, Chris Weller, on phone as the group made their way through Nebraska on their way home from Colorado.

Reader: First off, what makes one want to go off and start and experimental jazz band?

CW: That’s a good question. *laughs* That’s the music I was making at the time. It started as more traditional, but I was looking for more fulfillment, and I started to write music what just happened to be in that vein.

Reader: I’m guessing you have some prior background with the saxophone?

CW: Oh yeah, for sure. All three of us went to the Berklee College of Music. Devin, Cole, and I went to high school first, so we’ve been playing music for quite awhile.

Reader: So, this project has been going on for a couple of years now, and now you’re touring nationally. What makes one decide to start touring with such a band?

CW: It’s about developing our music more and it’s always been a dream to play in front of people. We work on our repertoire while we’re on the road, we work on it since we’re together for such a long period of time. Then there’s paying the bills, but that’s at the bottom of that chain.

Reader: This music is a little different, or can be at times, how are you received? Who gets into this type of music?

CW: It’s kind of interesting. We’ve been pretty well received most places that we’ve been. We haven’t always had the largest crowd, but we’ve found people that have appreciated it. I think our music has been best received in divey spots; especially punk clubs or art spaces. For some reason that makes it work the best.

Reader: I’ve noticed that with the upcoming show you’re playing with Dosh, and from what I’ve heard he’s more experimental electronic and ambient. Do you guys ever end up filling the bill with a punk band or anything like that?

CW: I don’t know if we’ve done that with this group yet but it’s something we’ve talked about doing. We’ve played at some spots punk bands play at but we’ve open to it.

Reader: Since there’s not a ton of bands doing what you’re doing has there been any interesting bands that you have shared the stage with?

CW: It depends on how we play what we have. Sometimes it can come off as more free rock than being associated with jazz. It can kind of go either way. We shared a bill with Dave King Trucking Company a couple of months ago, that was pretty great.

Reader: Dave King. I think I’ve seen his name come up before. Have you worked with him more?

CW: Yeah, Dave produced our latest record, it’s not out yet. It should be out in the spring or something like that. That was really great, he helped us quite a bit.

Reader: This new album, you’re still working on it? It still needs to be mastered?

CW: It is being mastered right now.  This guy Huntley Miller who does all of Dave’s mixing is on it. I think he just did (mastered) the new Bon Iver record that just came out. I look forward to hearing that.

CW: We’re just happy people take a chance on us and lend us their ears. It’s been great.