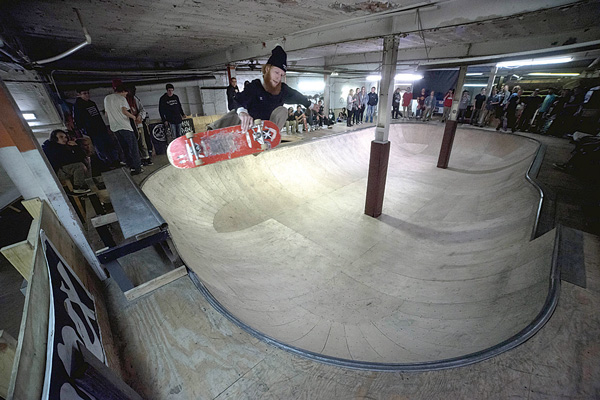 So what is The Carter? What is Common Apparel?  If you were wishing there was an adult skate park / art gallery / music venue, your dreams may have come true. Nate Blomquist, from Plymouth, MN, moved to Duluth about six years ago, and brought with his skate-oriented clothing line, Common Apparel. We had a chance to chat with him and check out the spot.

Turns out, Common Apparel actually began as a market research project for Blomquist in high school, but instead of studying someone else’s brand, he decided to create his own. He printed his first shirts for his final project, and the brand was born. After graduating, Blomquist moved into a house with friends in Duluth, where they began screen printing out of their basement and sewing on their own tags. “We started out in our basement years ago, and then moved to a bigger house that was huge, where we built our first mini ramp. I was mostly just skating and sewing, worked some odd jobs to pay rent, with the main focus of making clothes. So after we moved out of that house, we decided to take the next step and get a warehouse.”

They’ve owned their own screen printer since their first basement spot. The company specializes in direct to garment printing & screen printing. “We actually screen print our tags in house, cut them out, and sew them on ourselves too. So far we’ve been based as a unisex line. That’s kind of that skate style is, loose fits and unisex fits, and we aim to have good art on it, and creative ways of decorating it,” said Blomquist. Now after multiple relocations, they’ve moved on to a bigger warehouse space, also known as The Carter. For those who aren’t familiar, The Carter has become a lot more than a warehouse. It’s not only Common Apparel’s Headquarters, it is also a music venue and art gallery, and a skate park. Not just any indoor park either, but the first Duluth indoor park to have an indoor skate bowl. This is a big deal alone, but they have also impressively put it together themselves. “Every skateboarder’s dream is to have their own little warehouse, private park type place.”

Upon getting what is now The Carter, there was plenty of work to be done. “We had to put a lot of work when started here because it was an old auto body shop. Lots of oils and what not we had to deal with, we cleaned, power washed, and painted everything. It was slow going at first, but we eventually sold enough of our clothes to be able to afford to build this bowl. 3rd Lair (a skate park and shop in Golden Valley, MN) helped us out, basically gave us the wood for free, because they just wanted to see it happen. That’s what the skate community in Minnesota is all about.” As things have come together they’ve also built themselves two closed offices that always double as sewing space, laid flooring, created a gallery area, a loft, and starting adding to the rest of the park. As I went in to check out the space, they were smoothing out a new cement box addition for skaters to grind.

When asked exactly who all owns the company, Blomquist explained, “It was really just me in the beginning, with a help from a lot of friends, mainly the art being made and contributed by friends from the (Twin) Cities.” He also went on to explain a more recent addition to the company, business partner and co-owner, Colton Allen. “We just kind of teamed up, I know the industry side, the printing and the networking. He is a snowboarder who had to have back surgery, so he can’t really board as an athlete anymore, but wanted something else to do in relation with it. Colton is really familiar with the fashion side of things and the culture.”

Key-holders are a big help too. After getting the bowl operational, it was time to decide how to utilize it. In addition to filming and hosting competitions, they wanted experienced skaters to be able to access it. “We thought about co-ops in town, and we decided to start renting keys to people we trust. Key-holders pay a monthly rental fee, but can come skate the bowl whenever.”

As stated above, it’s also a budding hub for arts in the community. If you were to walk through the alley behind The Red Herring, you may just accidentally find yourself at a show or gallery at The Carter, as their only entrance at the moment is an alley-facing entrance, next door to The Herring. “We just wanted to mix all the art forms together, photography, film, music, and painting. We just wanted to bring it all into one, but have it emphasized on skateboarding. We have a lot of skateboarders who do the art, or it’s kind of the same styles from people who are into it.”

They also intend to work with more local board shops and as inventory likely will rise, they decided to start a separate company called Hillside Direct. It will be a company focused on servicing other local brands, artists, and company’s in screen printing things like direct to garment, stickers, and promotional materials. Look out for these young business owners with a vision; as Common apparel, The Carter, and Hillside Direct are all just getting started.