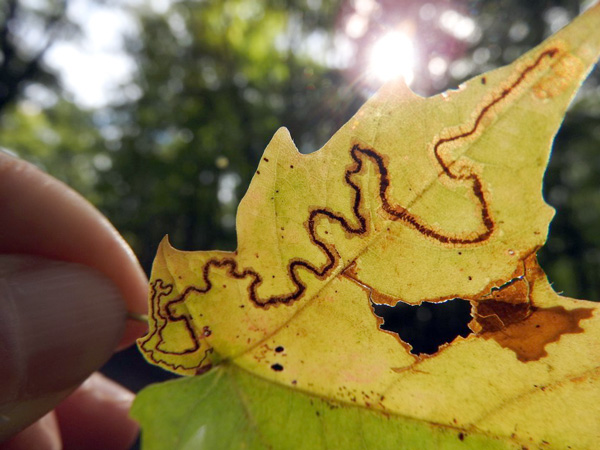 In the home stretch of its larval stage, this little critter suddenly kicked it into high gear and started eating even more of the leaf contents. The result is a stretch of mine that looks darker from the bottom side, and invisible against the sun. Photo by Emily Stone. 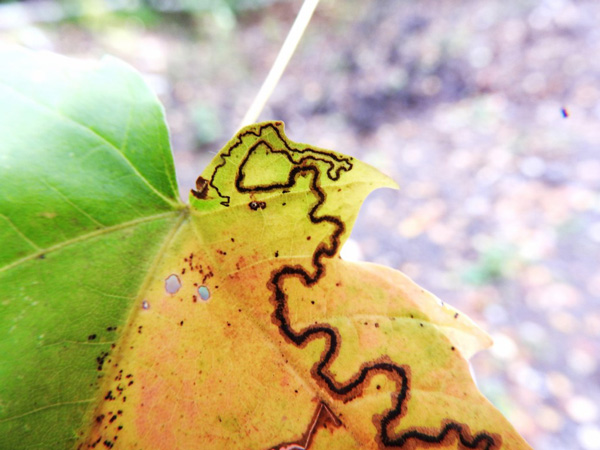 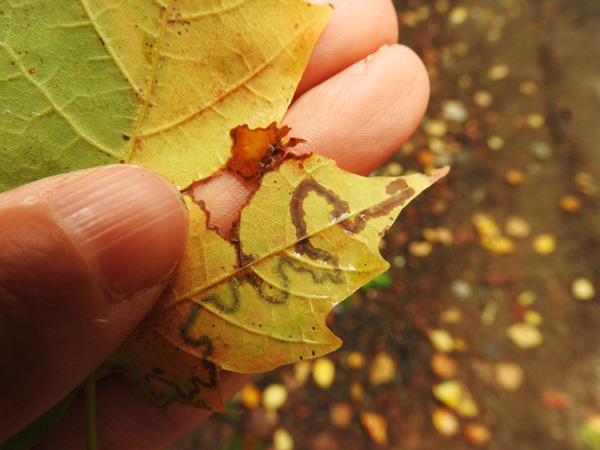 Water still dripped from the trees onto saturated duff, but blue sky peeked shyly through the clouds. Tired of the rain, my parents and I had taken advantage of a short break to go for a walk. Partway up the gravel road I followed a couple of mushrooms into the woods, and then looked up. Just above my head dangled a yellow and green sugar maple leaf with a squiggly line through it.
Immediately enamored (who wouldn’t be?), I plucked it down for a closer look. You may not think that animal tracking extends to insects, but you can use the same process of looking for clues that eventually tell a story. The squiggle on this leaf was typical of trails left by leaf miners, a group of insects (including moths, sawflies, flies, and beetles) whose larvae feed on the insides of a leaf between its “skins.” Some internet research and a quick email to Charley Eiseman, author of the fantastic resource Tracks & Signs of Insects and Other Invertebrates, and the “BugTracks” blog, turned up a narrative we can all relate to.
The story begins near the base of the leaf, where the trail of the leaf miner starts out narrow, about the width of a felt-tipped pen. The line itself is composed of a dark center stripe and paler, translucent edges. It records the growth—essentially the childhood—of a moth larva of the species Glaucolepis (Trifurcula) saccharella.
The egg was laid earlier this summer, maybe about a month ago, by a tiny, brown-and-white moth—wingspan 4 mm. The larva hatched, burrowed its miniscule body in between the upper and lower epidermis of the leaf, and began to eat. What is there to eat between the skins of a leaf? A juicy substance called mesophyll fills this inner space. It is full of chloroplasts, the green engines of photosynthesis.
Like a mountain path, the narrow trail of the leaf miner scribed switchbacks in the lowest lobe of the leaf near the petiole before widening and flowing like a river toward the leaf’s tip. It was fascinating to follow that widening trail and imagine the larva growing bigger as it fed.
The line of frass (caterpillar poop) down the center of the trail tells its own story. Through much of the mine the frass is just a fuzzy brown line, but in some sections a zigzag pattern becomes visible. It looks for all the world like one of the fancy stitches on my sewing machine. Charley Eiseman explained the cause of this pattern in an email. “It’s mesmerizing,” he wrote, “to watch a nepticulid larva at work under magnification—the central frass line is made up of many tiny pellets, and the larva is constantly depositing them as it eats, wiggling its tail end around methodically to place them just so.”
When I read that, you can bet I added “watch a leaf miner larva at work” to my bucket list!
Looking at my leaf, I can just imagine the absolute concentration of the larva as it went about its essential business of eating, and necessary business of pooping. Occasionally, though, the pattern seems to break. There’s a slight accumulation of frass, then a thinner line, and—is it my imagination?—after that the entire mine seems to get a tad wider. I suspect that these interruptions in the pattern indicate places where the caterpillar got too big for its skin and molted, becoming a new “instar.”
Just before the end of the mine, its color changes drastically. I noticed it first on the LCD screen of my camera. I had just taken a photo of the leaf backlit by the sun. Most of the mine lit up beautifully, like a stained glass window. Near the tip of the leaf, though, the mine around the frass line became completely invisible! Turning the leaf over, I noticed that the color on the back side also changed drastically at that point. For most of the mine, it was apparent that a layer of leaf was more intact on the lower side of the mine than the upper. Then, for the last stretch of the mine, the insides of leaf seemed to be completely hollowed out. The frass line appeared thinner and straighter, too, like the path of someone on a mission. My hunch is that on the final day before its metamorphosis, the larva suddenly became a ravenous teenager and started eating everything in reach, and eating it so fast that the frass line stretched thinner, like a line from a pen swooped lightly across a page.
Finally, maybe a quarter inch from the end of the mine, the frass line ends. The mine continues as a transparent section of leaf, missing all its green. This, Charley confirmed for me, represents the length of the larva—frass marking one end, un-eaten leaf marking the other end—just before it popped out of the leaf, dropped to the ground, and formed a cocoon to overwinter before completing its metamorphosis to a moth next spring.
“Watching” the process of this larva growing bigger, and bigger, and finally leaving home to metamorphose reminds me of all the little old ladies I grew up with who would pinch my cheeks lovingly and admire how I’d grown. Then they’d hold up their thumb and first finger about an inch apart and exclaim “I’ve known you since you were this big!” If I could find that tiny larva, now wrapped tightly in its cocoon, you can bet I’d pinch its cheeks, too! After all, I feel like I just watched it grow up before my eyes.