Velahsa: A Series of Small Choices 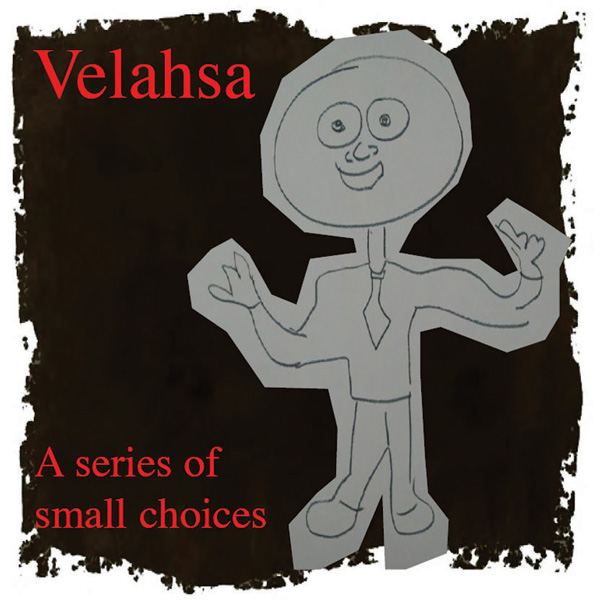 I’m a little picky when it comes to reviewing bands that aren’t from around the Twin Ports area, but I definitely listen to pretty much every CD that gets sent to me. Sometimes CDs from states away where I’m not even sure how the band, artist, or promotional manager would even know about me or the Reader arrive on my desk. Local music gets top priority, but if I like or hear something that stands out, I’ll give it a shot to do a review no matter where it came from.
In the case of Velahsa, they’re from the Twin Cities, which is close enough to have some local interest. Another plus for them is that they actually play in the Twin Ports from time to time. The band met the well known Beaner’s doorman, Pete Cich, while playing a show there and have come up to play Petefest for the last few years. On Friday, September 30, they will be performing with the Twin Ports rock bands, Lord Montague, and Pale in Comparison at R.T. Quinlan’s.
From what I can tell, Velahsa’s latest album, “A Series of Small Choices,” was released in 2015, but they will be going back to the studio this winter. First off, I’m going to mention how to even pronounce the band’s name because I was a little confused by that. The band has a logo with a dinosaur, which is an illustrated velociraptor and Velahsa is short for that. The logo looks kind of like a dragon to me, but whatever.
The band is an alternative rock three piece with band leader, Bryan Miller, on guitar, vocals, and piano. Jack Smrekar covers drums and Tony Mary is on bass. I’d imagine that there is some difference between the recorded album and their live performance because the use of keys comes up pretty often and it would be somewhat difficult to loop either the guitar or keys with the way the music is laid out.
While I hate making comparisons to other bands, I really got the feel of Foo Fighters, Weezer, and some punk aspects like from The Descendants. A lot of the material carries an upbeat alternative garage rock feel. Miller notes that bands such as The Replacements, Nirvana, Soul Asylum, Wilco, and Sonic Youth are influences. I’d agree with that except I didn’t get much of a Sonic Youth sound off the album. It has some experimental aspects, but not as over board and noise oriented as a band like Sonic Youth. While there is a certain amount of accessibility to the music, this isn’t to say it’s just a bunch of shallow pop-rock songs.
As I’ve often said, the lyrics can really decide the ultimate feel of songs. Despite the upbeat undertones of the material, the album really isn’t the happiest. It deals a lot with relationships that are in various levels of decay. There is self destruction and redemption. There is introspection and reasoning.
The album begins with the track, “Deep End,” where the opening line goes, “Constant push and constant pull I am amazed I didn’t lose it/I have to recover from you/You tried to bite off more than you could chew/You tried to fight with everything I said/Go all the way off the deep end.” Yes, the song has a grungy yet somehow surf rock feel, but it sets up a number of songs that are essentially about messed up relationships.
Perhaps the most depressing song on the album is the track “Kill My Loneliness.” While the band does have a radio friendly rock approach, “I used to kill my loneliness. I used to drink it away but now it’s here forever.” While the song is pretty catchy, despite it being fairly sad, the band found it fitting to have both a full band rock version of it and a solo piano version.
As far as the album goes, the addition of the piano adds some depth to what might be normally construed as just a garage band. It makes for a fuller and more meaningful listening experience than just busting out some bar chords. It gathers more impact and sometimes comes off with the feel of a rock opera.
I haven’t personally seen Valahsa play live, but they seem like they should have a fun set despite some of the not so cheery lyrics. Miller has been playing for around 20 years and it’s fair to say that there are a good amount of things that he falls back on that make the band more than just a typical garage rock group. They will likely be the least heavy of the bands on Friday, but they will certainly rock it.