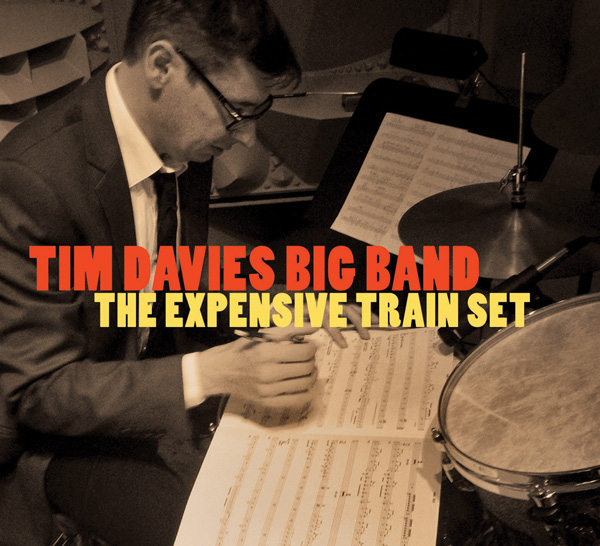 The jazz big band is one of those dinosauric amalgamations that roamed the land in thundering herds back in the mid to late 20th Century.
From Fletcher Henderson to Lionel Hampton, from Count Basie to Duke Ellington, from Woody Herman to the Thad Jones-Mel Lewis Orchestra, these large aggregations (usually 18 pieces) traveled up and down the highways and byways of this great land, spreading the gospel of jazz to listeners and dancers at everything from jazz festivals to high school assemblies, community gatherings to huge concert halls. Their repertoires were wide-ranging and allowed immense flexibility in the kind of engagement they could fulfill.
But like the dino, a traveling big band was an economic nightmare. So today, though you can still find them, big bands (professional ensembles, not high school or community groups) play a largely reduced role on the jazz landscape.
That said, Australian drummer and big band leader Tim Davies brand new release “The Expensive Train Set” has all the emotion that an orchestra can transmit. This set (that comes to us on Seattle-based Origin Records, a superb jazz label that, with its sister labels OA2 Records and Origin Classical, gives jazz fans an inside look/listen at the outstanding jazz scene in the Pacific Northwest and beyond) is chock full of brilliant section work with brass screaming over vibrant reeds and a “tight-as-a-gnats-ass” rhythms core that percolates below it all. This disc is a wonderful new release that sounds like it could have been recorded back in 1974, but also looks and sounds like what it is: a 21st Century project with tons of flair and panache.
Drummer Davies started his first big band in Melbourne, Australia back in the late 90’s. Half of this new record was done with that resurrected group, and half with his L.A. band that features some of the finest players that Los Angeles has of offer.
“Conceivilization” was spurred by Davies becoming a father (thus the clever title), and like conceiving a child which takes two, this movement (the first of a four part piece thru the disc) features two soloists at a time. You can hear the sparks fly when alto sax ace Alex Budman and trumpeter Ken Bausano really dig in.
“Sarahbande” (can we guess that Davies’ child is named Sarah?) was actually commissioned for Australia’s finest high school big band….Tony Hicks’ flute flitters and his tenor swaggers in giving this child its due diligence.
Louis Prima’s classice “Sing Sing Sing” begins note for note, just the way it was played by the Benny Goodman Orchestra all those years ago. The tune then gets Timified with an updated arrangement that works around Tony Hicks’ clarinet.
Raya Yarbrough is a new vocalist to my ears, but she sits in on her own “Let Sleeping Questions Lie” and steals the show.
“Jazz Vespas” is a simple blues that allows the cats to blow without having to count in their heads all the weird time/rhythmic stuff that having a drummer as a band leader entails.
“Goon Juice” is what Australians call cheap wine, and this ditty portrays a kind of high school party with all the hijinks that can, and often does, occur on those occasions.
Today Tim Davies spends much of his time as a busy conductor and orchestrator
in Hollywood.
The elliptical album title is best described by Davies this way “…some years ago, someone mentioned that having a big band is like having a train set. Both involve many hours of work and preparation, and you never really finish. Both are also quite niche things. But the main thing they have in common is that they both cost you a lot of money and will never make you any!”
Tim, Tim, Tim…follow your heart and the money will come…eventually…or so I’m told.