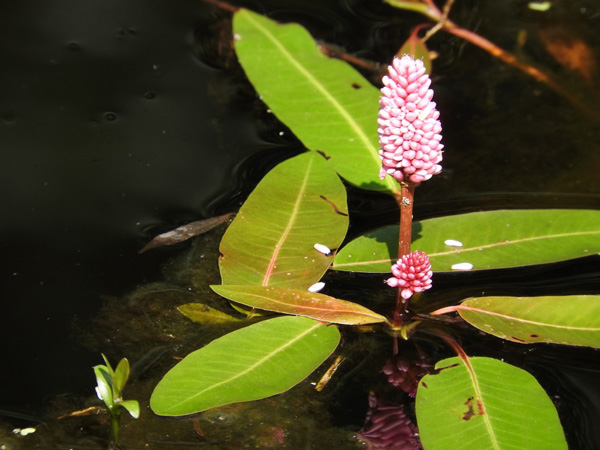 The hot pink flowers of water smartweed brighten up many a dark, autumn day. Photo by Emily Stone. 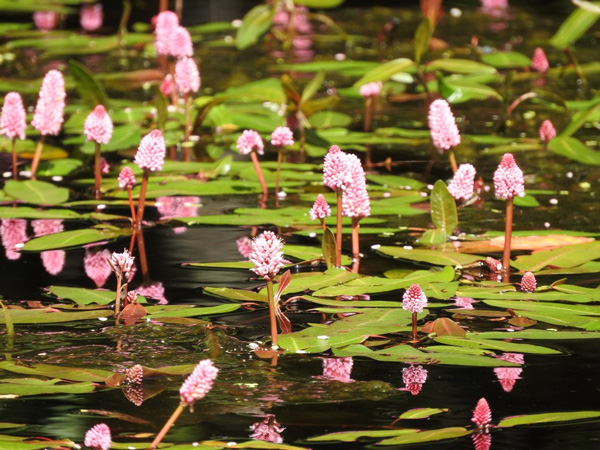 I heard a lovely quote recently, from French philosopher Albert Camus. He wrote: “Autumn is a second spring when every leaf is a flower.” It seems to be a fair sentiment as golden leaves brighten cool, damp days. But fall has plenty of real flowers to brighten its days, too. In particular, I’ve been noticing a dark, stagnant pool just filled with hot pink flowers that rise above the glossy reflections of scarlet maple leaves. It’s on my way to work, so I’ve stopped a couple times with my camera when the evening light slants onto the scene with a particularly warm glow.
The flowers belong to a wetland plant called water smartweed, Persicaria amphibia. Its genus name, Persicaria, refers to peaches, and was bestowed because the oblong shape of its leaves resembles those of a peach tree. Amphibia is an even more telling part of its name. Amphibious, of course, means living in both land and water. Most plants choose one or the other and specialize. Water smart weed is so canny that it can change form to thrive in either habitat.
Currently, all the smartweed plants I’ve noticed when stopping to admire my roadside pool are fully aquatic. They have oblong leaves with blunt tips that float on the surface, and short, thimble-shaped clusters of shocking-pink flowers that rise above the water on smooth stems. I’m not surprised to see the aquatic form, since this particular pool rises and falls with rain events, and this summer we’ve had record precipitation. In some years, I’ve noticed this pool go almost completely dry by the end of summer. It makes sense, then, that a plant that can thrive in either a full wetland or mud would be successful here.
Its success isn’t limited to Wisconsin; water smartweed is widely distributed across the country. The first time I encountered water smartweed, my graduate school botany class was tramping along the shore of Lake Champlain in Vermont. There, on the edge of the muck just barely accessible without rubber boots, we found the plant’s terrestrial form. The thick patch of smartweed stood a few feet tall on gangly stems with hairy, wavy-edged, sharp-pointed leaves and long, slender flower spikes. I never would have guessed that the floating plants in my pool and that gangly patch in the mud were the same species (for many years they did have different names), but modern botany has exposed their shape-shifting secret.
My definition of adaptation is “something a living thing has or does that helps it survive in its habitat.” Water smartweed adapts to both its habitats. You may think that this makes it “smart,” and it would be logical to assume that’s the source of its common name. The truth is much funnier. According to the U.S. Forest Service’s plant of the week website, “the term smartweed is thought to be a more sanitized version of the original word “arsmart” for the use of the plant in medieval times to relieve itching and swelling of the human posterior.” This hot pink flower has many ways to brighten your day…
Many groups of humans throughout its wide range have found the roots, stems and leaves of water smartweed useful for medicine and its seeds useful as food. Waterfowl, marsh birds, song birds, and upland game birds also eat the seeds.
In addition to those common uses, scientists have even discovered that smartweed accumulates trace amounts of gold. Perhaps that’s why these striking flowers shine so brightly in the slanting rays of the shortening days of fall. Oh, Albert…I’ve changed my mind. Autumn doesn’t need to be a “second spring.” It has treasures all its own.