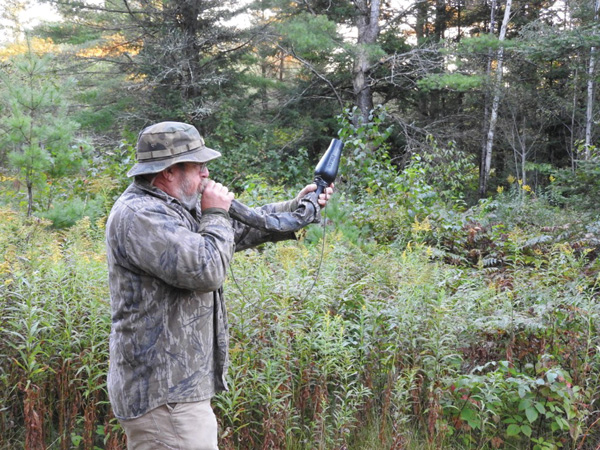 Laine Stowell, elk biologist with the Wisconsin DNR, bugles like a bull elk. Our hope was that other bulls in the area would respond to the bugle as a challenge, and reply with their own bugles. Photo by Emily Stone. 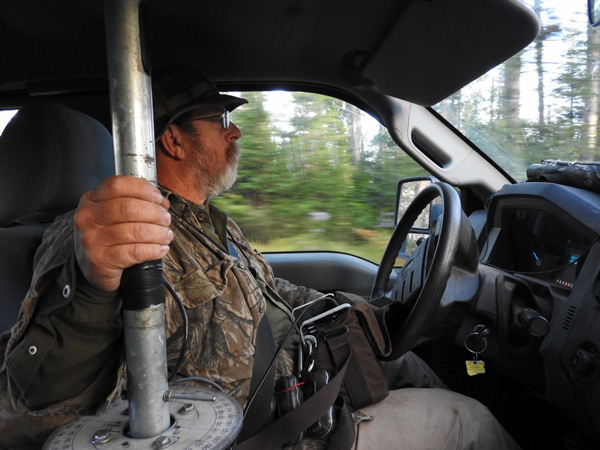 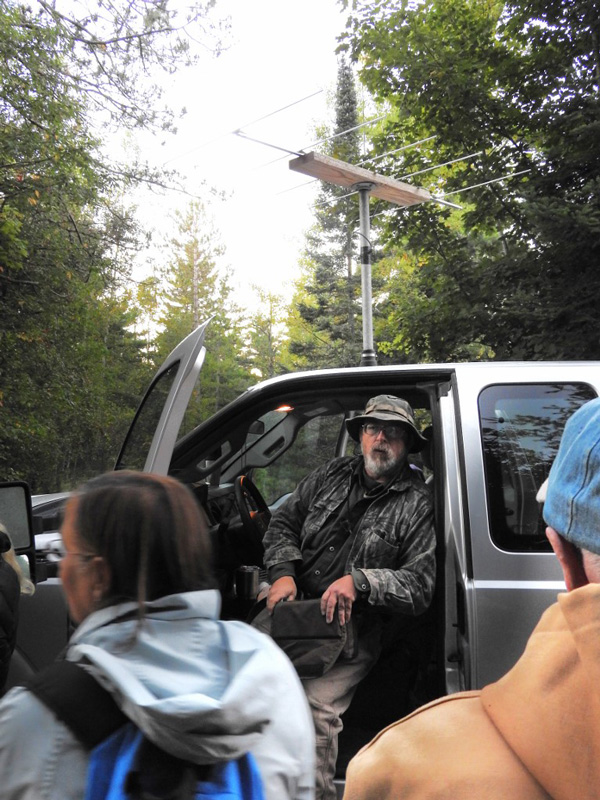 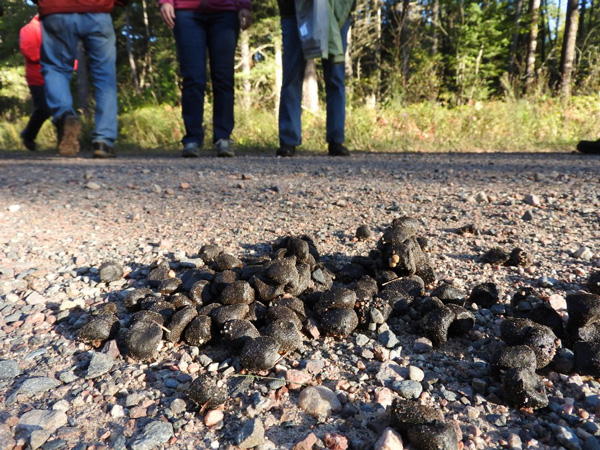 The sky was just beginning to lighten into grays and pinks as we gathered at the Clam Lake Guard Station to meet Laine Stowell, elk biologist with the Wisconsin DNR. Slowly rolling down Highway 77 in our car caravan, we barely noticed as dawn broke.
Our first stop was just behind the storage facility at the end of a paved road with several small homes. Riding in the truck with Laine, I’d been privy to the steady beeping that signaled a cow with a radio collar was nearby. Driving with his left hand, his right hand gripped the pole of the big receiver antenna punched through his roof and spun it slowly. As the antenna pointed in the direction of the cow’s VHF collar, the beeping grew louder. She was close, he said, between the side road and the highway.
Three years ago I wrote about how the presence of elk in the Chequamegon-Nicolet National Forest made it feel wild. On that morning we had hiked a mile or so into the woods on a dirt road. Today’s urban adventure didn’t convey the same mystique.
Parking at the end of the lane, we all tiptoed out of our vehicles and gently pushed the doors closed, minimizing sound however possible. Gathering around Laine, we listened as he put the small cow call to his lips, and squealed out several expressive notes. When that failed to elicit a response, he continued with the longer bull bugling device. The long, flexible tube was covered in camouflage, with shiny black pieces at both ends. Putting his lips to the mouthpiece, Laine let out a high-pitched wail. Hopefully, another bull would hear the bugle and take up the challenge.
We stood expectantly: ears open, breathing controlled, arms wrapped against the morning chill. We admired the beauty of the morning light and dappling of fall colors. Silence. The elk were close, but not cooperative.
Elk were extirpated from Wisconsin in the 1800s due to over hunting and a rapid decline in habitat. In 1995, twenty five elk were released into the National Forest near Clam Lake, and the DNR now estimates the population to be 160-170 animals. Several dozen more elk are scheduled to arrive from a Kentucky herd this March. The new elk will boost the genetic diversity of this herd, and increase the population to the point where a limited hunting season can be considered.
Piling back into our vehicles, we caravanned to a couple more sites, each deeper into the woods than the last. Laine had woken up early to scout the area, and had located several cow-calf groups in the vicinity. During the rut—which starts around August 25 and can last into the middle of winter—where you find cows, you also find bulls. They were there…we could hear the beeps from their radio collars…but none made a peep in response to Laine’s calling.
As the sun rose higher, we bumped still deeper into the forest. A long, narrow clearing appeared and we pulled off to the side. This was the ELF line, and its grassy clearing is one of the main reasons that this area was chosen for the elk reintroduction in 1995. The ELF was a U.S. Navy project that used extremely low frequency (ELF) radio waves to communicate with deeply submerged submarines. The transmitter operated from 1989 to 2004, and consisted of two 14-mile transmission line antennas in the shape of a cross, with the transmitter station at their intersection. The lines were removed in 2008. Its legacy is that some of the clearing that was once mowed for maintenance is now kept open for wildlife habitat. The elk like the freedom of movement and tender new growth that the cut area provides.
We walked several yards uphill, away from the cars and the valley of the Torch River. By now the group was getting a bit restless; still hopeful, but also resigned to the fact we might not hear any elk.
Laine made another cow call, and almost immediately the haunting bugle of a bull echoed in the distance. Did you hear it? We looked around the group in excitement. Not everyone had heard. Laine called again. The distant elk bugled again, and then, after a second’s pause, another bugle sounded closer, and from a slightly different direction. We pointed in the direction of the sounds and grinned.
At least one of the bulls was pretty close, and in the opposite direction we’d been walking. Back down past the vehicles we ambled in the ELF clearing, and stopped on a knoll above the river. Laine and the two bulls called back and forth several more times. We even saw a flash of warm tan hair through the trees, likely feeding on the other side of the river.
Standing there in land cleared by the military, admiring the cast of sunlight and listening to the uninhibited sound of animals going about their essential business of mating, I was struck by the contrast of wild and human-contrived. The elk were extirpated because of humans. They returned because of humans. We found them by using very high frequency (VHF) radio collars in an area cleared for extremely low frequency (ELF) communication—both manmade. And yet, the elk paid almost no attention to us. Their instincts, their drive to mate and survive, are the same as ever.
The wildness of managed populations is a philosophical question that isn’t resolved in my own head any more than it is decided among scientists or the public. We’ve complicated things, as usual. But still, I’m grateful for the opportunity to listen to the majestic bugle of an elk on a crisp fall morning just minutes from my home.