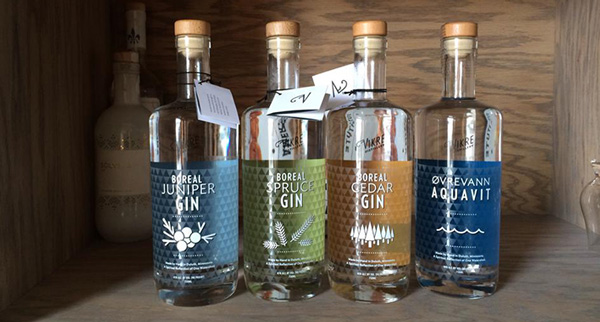 In 2012, Vikre Distillery started with a husband, a wife, and a dream. As with many businesses, things started from humble beginnings in the Palucci Building located at 525 South Lake Avenue. “Initially it was just the two of us, we brought more people on as we went, now we have a team of 25 folks,” said Joel Vikre of himself and his wife, Emily, about the start of the company and its development.
In 2014, the business began distributing their spirits and it’s to say, with some success. Just recently, the small business has won USA Today’s “10Best” in the “Best Craft Specialty Spirits Distillery” category. Experts in the field of distilled spirits narrowed down a list of 20 nominees, which in itself is an honor. Out of the 20, 10 went on to be voted on by spirit enthusiasts throughout the Nation online.
With the support of the community, Vikre ended up on top. “It’s surprising, exciting, and humbling,” Vikre said of the win.
In a way it is surprising that the couple could turn around and make a Nationally recognized spirit in a few short years, “neither of us had distilling experience. Emily was a PhD in food policy, a food writer, and recipe developer. I worked in global health and non-profit strategy, we discovered it along the way,” said Vikre.
Despite not having very much experience at first in their venture, the two did have a vision of what they wanted the business to be. “Our vision was to make awesome spirits that reflect the water shed of Lake Superior,” said Vikre. The spirits also pull from Emily’s Norwegian heritage, “Emily grew up here, but her family has Norwegian heritage, so one of the things we wanted to make was Aquavit, I think that’s the primary thing the contest was recognizing,” said Vikre.
While the Ovrevann Aquavit is an area favorite, the distillery also makes specially crafted gins and whiskeys. “They’re all pretty popular. I’d say the gins are the most popular. There’s the whiskey, but we don’t have much because you have to age it. That sells out quick when it’s been available.” The whiskey is made in small batches and periodically released while most of the other spirits are around throughout the year.
As far as the future of the company, while there will certainly be mainstays of their products, the production of whiskey will increase in coming years. “What we’re focusing on right now is whiskey. We’ve been developing partnerships to grow the grain locally. We’re putting away whiskey now that in two years should be really awesome. That’s our current focus,” said Vikre.
Vikre stands alongside a number of local breweries that craft excellent beers. The secret ingredient? Living next to the world’s largest fresh water lake can’t hurt. Overall, Duluth gets to say they have another voted “best” thus giving it another reason why the area is great. One thing is for certain, with that whiskey aging down at the distillery, Vikre will be around for a good long while.