On August 29, 2016, the city of Duluth mailed out notices to residents of West College Street, portions of Woodland Avenue and parts of West Arrowhead Road warning that the city would be cracking down on front yard parking in those neighborhoods. Beginning October 1, any vehicle found parked in a front yard would be ticketed $24. Furthermore, the property owner in whose yard the vehicle was parked would be issued a $200 “administrative citation.”

The neighborhoods in question, of course, are all near UMD and the College of St. Scholastica. The notice stated: “The concerns that have been expressed include the destruction of front lawns, the hindering of access to residences by emergency services, harm to the environment, overcrowding and general unsightliness.”

The last concern, “general unsightliness,” is the one I hear the most—people who don’t park in their front yards don’t like how it looks when other people do. And because the houses with the most cars are often college rentals, the “unsightliness” of front yard parking feeds into a general anti-rental sentiment that many residential homeowners share.

According to Barbara Montee, president of the Duluth Landlords Association (DLA), the first that landlords heard about the new enforcement policy was when the notices arrived in the mail. On September 8, the DLA met with city staff and raised a number of concerns. For one thing, they wanted to be notified when tenants’ cars were ticketed; otherwise, they would have no way of knowing. For another, they objected to the administrative fine and asked that front yard parking be enforced using a “three strikes and you’re out” policy instead. Finally, they wanted the enforcement date to be pushed back to June, when most college leases were signed, so that current tenants would not find themselves unexpectedly out of a parking space.
In response to the DLA’s concerns, the city has softened its approach somewhat. Mark Bauer, the city’s parking operations specialist, told me just before press time that the city has decided to delay issuing the $200 administrative fines until April. Cars in front yards will still be ticketed starting October 1, but the city now plans to send letters to property owners letting them know about the tickets and advising them to take care of the problem before they get hit with big fines in April.

“It just gives them a little more time to try and address the situation and get it under control,” said Bauer. “This isn’t a money-making effort or anything. We’re just trying to respond to some concerns out there. You know, do it as nicely as we can. We could go ahead and issue administrative fines willy-nilly right now, but it’s not very nice. So, you know, they gotta run their businesses, too. We get it, you know?”

Montee acknowledged that there were properties that violated the front yard parking ordinance, but she objected to having certain neighborhoods singled out. “They are not allowed to discriminate against college properties,” she said. “There’s a lot of front yard parking throughout the city, and they have not notified the city at large [about a crackdown].”

Bauer said that the city does intend to enforce the rule city-wide, but said they were starting with the neighborhoods that received the most complaints. “This is really an effort to just try and get some help. We’ve monitored this type of thing and ticketed for several years now, and we’ve kind of ramped this up a little more every year. And it really does not have any kind of lasting impact, and we’re getting a lot of complaints from residents of the area and emergency services that are pretty legitimate concerns, so we’re trying to be as reasonable as we can, but we also have to enforce the law….It’s really gotten out of hand.”

Whether the ramped-up enforcement will solve the underlying problem of parking in college neighborhoods is doubtful. There are simply too many cars and too few places to put them. They’ll move from the front yards into the streets, where they will compete desperately with everyone else for the few remaining parking spaces, while traditional homeowners gaze at them disapprovingly from behind their curtains and jot down new complaints to send to the city.

Construction is proceeding briskly at Kenwood Village, the residential/commercial development at the corner of Arrowhead Road and Kenwood Avenue. On September 13, the city planning commission approved special use permits for three food-service businesses in the development.

The Crooked Pint Restaurant is a small franchise with four other locations in Minnesota. According to the web site for their Apple Valley location, “Crooked Pint Ale House is a nouveau urban pub with the feel of a local neighborhood restaurant. The menu includes classic pub faire with nearly 60 choices for lunch, dinner, and weekend brunch as well as kids’ menu selections. We feature the best Lucys in town and you will be back again and again for our Pub Pot Pies, Pub Tacos and our Jumbo Tater Tots.” A Lucy is a burger with cheese or other fillings stuffed inside the patty.

To help people forget their use of the word “faire,” the Crooked Pint also serves beer, wine and abundant hard liquor. In Apple Valley, they schlep tallboys of Hamm’s and PBR for $3.50 each, with the price dropping to $2 during happy hour. They also sell 21-year-old Glenlivet for $25 a drink, and 18-year MaCallan for $30. Russ Smith is reported to be the operator.

The second new business at Kenwood Village will be a Caribou Coffee teamed up with an Einstein Bagels, offering coffee and bagels and bagel sandwiches, such as an asparagus and mushroom egg white sandwich or a green chile club sandwich. The Caribou Einstein will have patio seating and drive-through service.
Last, and least, a Little Caesar’s will move into a third storefront at Kenwood Village. All three new businesses are expected to open by spring of 2017. 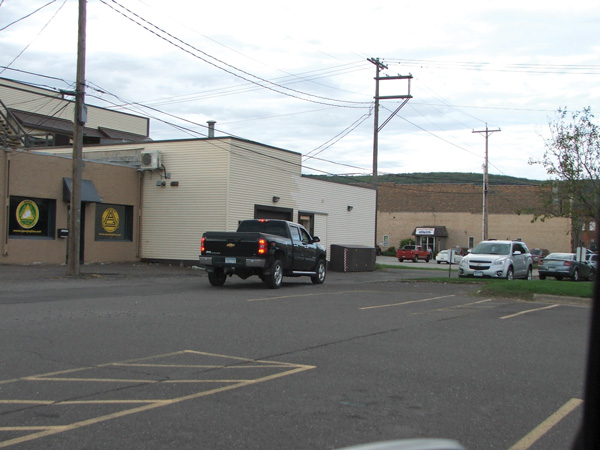 Also at their September 13 meeting, the planning commission recommended vacating an alley right-of-way in West Duluth. The alley, which runs behind the Spirit Valley Laundromat on Central Avenue, is a potholed mess that people often use as a shortcut to or from the nearby Super One grocery store. The laundromat’s doors open immediately into the alley, offering little chance for people turning in from the street to see pedestrians.

Valaree Hammond, owner of Spirit Valley Laundromat, spoke to commissioners in favor of the vacation. “It really is a health issue….As soon as you step out of that door, you’re in the traffic. There is no buffer there whatsoever….We’ve got a parent carrying a basket, she can’t hang onto the child. The child takes off out there. I can’t count the number of times they’ve almost been hit.” According to Hammond, the only thing that slows down traffic in the alley are the potholes.

The planning commission unanimously recommended that the alley be vacated, with a number of commissioners attesting personally to the alley’s hazardousness. (I could add my own anecdotes.) The issue will now go to the city council for a vote.

During discussion of the alley vacation, Ms. Hammond mentioned that she was working on a separate agreement with Super One, whereby Super One would buy part of the laundromat’s parking lot and build a new, bigger entrance to Super One’s parking lot off of Bristol Street. A few years ago, the West Duluth Super One had the worst parking lot in the city, with only one entrance and traffic patterns that kept pedestrians and vehicles in a state of near-permanent conflict. Then they bought Liberty Liquor and punched a new entrance into their lot from Central Avenue. This improved traffic flow enormously. A new Bristol Street entrance would improve it even more.

City council president Zack Filipovich extended his presidential powers to their breaking point at the agenda session of September 8, 2016, when he asked fellow councilors to join him in singing happy birthday to chief administrative officer Dave Montgomery. The audience, a handful of city managers and staff, visibly winced and looked longingly toward the exits. Mr. Montgomery’s smile, as he sat at the side table reserved for city administration, was pleasant and fixed. Very fixed.

The tortured warbling of the city council filled the historic chambers, hesitant at first but gaining in volume as councilors found their team spirit and threw back their heads to give it their all. But as they surged joyfully into line three of the familiar song, they ran into an unexpected problem. What were they supposed to call Mr. Montgomery?

. . . who?
Should they call the CAO by his first name, Dave, or more correctly, David? Or should they call him Mr. Montgomery, his usual form of address at council meetings? The song wavered, then unraveled, as councilors made different choices. But the phrase that emerged most clearly from the general confusion came from council president Filipovich, who sang, “Happy birthday, dear Montgomery.”

The chief administrative officer took it in stride. He said, “I would just like to remind President Filipovich what goes around comes around”—a warning that he might retaliate with a little round of happy birthday payback of his own. That’s how they roll at City Hall.