A Rainbow of Mushrooms 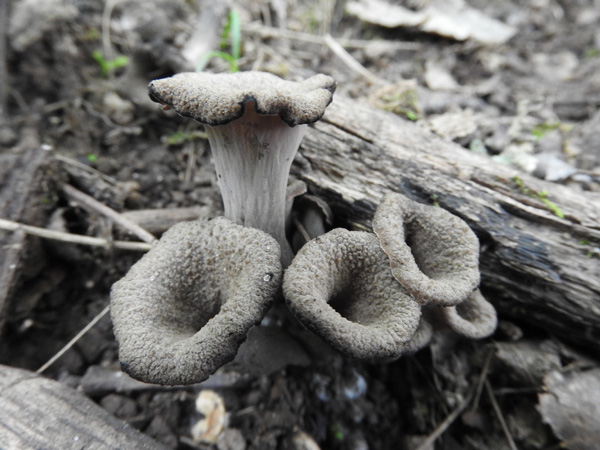 Neon yellow. Brilliant orange. Lavender. Pure white (and deadly). Deep blue. Gray. Variations of red, pink, and coral. And every shade between off-white and brown. The rainbow of fungi in the Namakagon Town Hall was incredible. After just the first day of the Bayfield County Mushroom Foray we’d already found almost 200 species, and they were laid out in groups on a sea of tables.
Now, I should be clear. I didn’t identify all those species. I could tell you the common name of about five, maybe ten, of the fungi, and no scientific names with confidence. Don’t get me wrong, I’m fascinated by mushrooms—how they partner with trees, orchids, and a plethora of other plants; how they decompose wood and make nutrients re-available to the ecosystem; how they parasitize insects, trees, and even us. I’ve focused on their stories, but not always their identification.
It’s a good thing, then, that Patrick Leacock, mycologist from the Field Museum in Chicago, came north with Britt Bunyard, editor of Fungi Magazine, to be our mycologists. In addition, many knowledgeable amateur mycologists from the Mycological Societies of both Minnesota and Wisconsin came all the way here to check out our amazing diversity of fungi.
After admiring the rainbow tables on the second morning of the foray, we headed out onto the trails to look for more. Entering the woods I sighed in resignation. I’m so much more confident in plant identification. Mushrooms, except for those few I know, are confusing.
The first mushrooms we saw as we entered the woods on the mountain bike trail were big, hulking, white masses just pushing up through the leaf litter. They were the perfect example of “puhpowee,” which (according to Robin Wall Kimmerer’s Braiding Sweetgrass) is the Potawatomi word for “the force which causes mushrooms to push up from the earth overnight.”
Always an educator, I gravitated toward the sole kid on the hike as he picked up a big white mushroom to admire its bulk. Of course René wanted to know what it was. I raked a fingernail across the gills on the underside of the cap, breaking their brittle flesh. As we watched, small droplets of white liquid oozed out of the injury. Relieved, I could identify this as a Lactarius species, a group aptly named for their milky ooze.
Many Lactarius mushrooms are smaller, and often prettily colored. One species is sapphire blue. Another species smells like maple syrup. This particular kind tastes like hot black pepper, so spicy that a single touch to the milk with the tip of your tongue releases a slow burn for several minutes (Yes, I’ve tried it). With this revelation, René also just had to try it. While he said it wasn’t too bad, he did scrunch up his nose and stick out his tongue.
(It’s important to note here that while this peppery Lactarius is not considered edible [the spicy flavor would make you sick], you generally have to actually swallow a mushroom to be poisoned by it. Some experts actually chew and spit out mushrooms to help with identification. I’m not recommending that technique if you don’t know what you’re doing, though.)
As we meandered farther down the trail, bright red, orange, and yellow waxy caps became prominent among the green carpets of Pennsylvania sedge. Holding one up for René, I had him feel the cap and gills. Their brittle flesh has a distinctly waxy feeling. Their cheerful colors brighten up grassy sections of woods.
Next we found a small patch of black trumpets. These dusty gray, vase-shaped mushrooms have thin, dry walls with no gills and often grow in clusters. A relative of the choice-edible chanterelle mushrooms, these are also considered a delicacy, and dehydrating brings out their Romano cheese aroma. Upon hearing their name, René brought the narrow end of one to his lips, and blew a little fanfare on his new “trumpet.” My kind of mushroom hunter, this kid.
While picking more black trumpets to fill his basket, René also found a little cluster of mushrooms with bright yellow stems and deep green caps. “Jelly babies,” someone had called them earlier. René held one up to his forehead like a unicorn horn. We agreed that while we weren’t big Packers fans, we both really liked those shades of green and yellow together.
The next mushroom we found was pretty non-descript. White stem, white gills, white flesh, with just a skim of soft red on the upper surface of the cap. It felt fragile in my hand despite its relatively robust proportions: a characteristic Russula. This big group is hard to tell apart, but you don’t need to know individual species to have a little fun. Instead of long, stringy fibers, these fungi have spherical cells that break apart easily. Pick one up and it will crumble in your hand more easily than Styrofoam. Throw one against a tree and it explodes in a shower of white crumbs. René and I experimented with this characteristic. Several times. Maybe this isn’t the most dignified use for a mushroom, but it sure is fun!
In the end, the Bayfield County Foray collected over 225 species of fungi. You can check out many of them on the Cable Natural History Museum’s Facebook page. More yet are awaiting identification by the experts using sophisticated techniques. I love knowing that our area is a hotspot for diversity. I also love knowing that even a little bit of knowledge (combined with a bit of humor) goes a long way in appreciating that diversity.
Next year, we’ll share our mushrooms with the whole country. The North American Mycological Association is holding their annual foray right here in Cable, during the weekend of September 9, 2017! Email Emily@cablemuseum.org to get in on the fun!