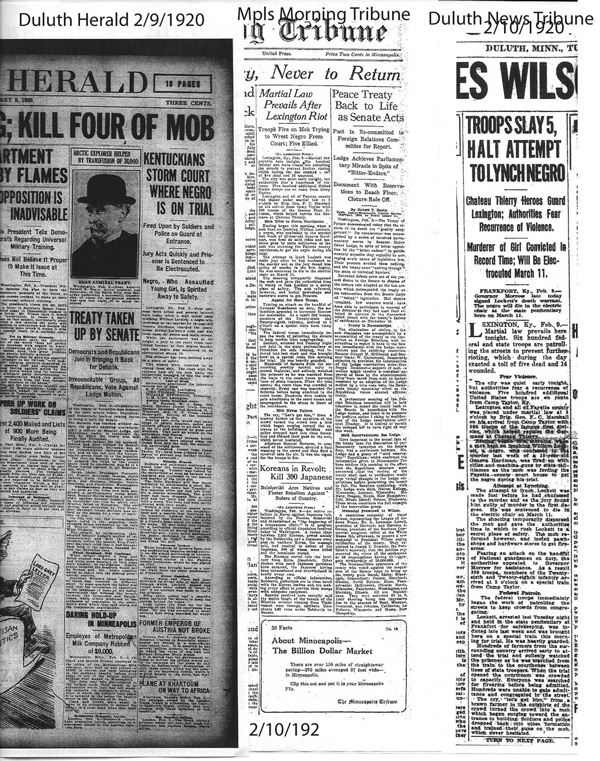 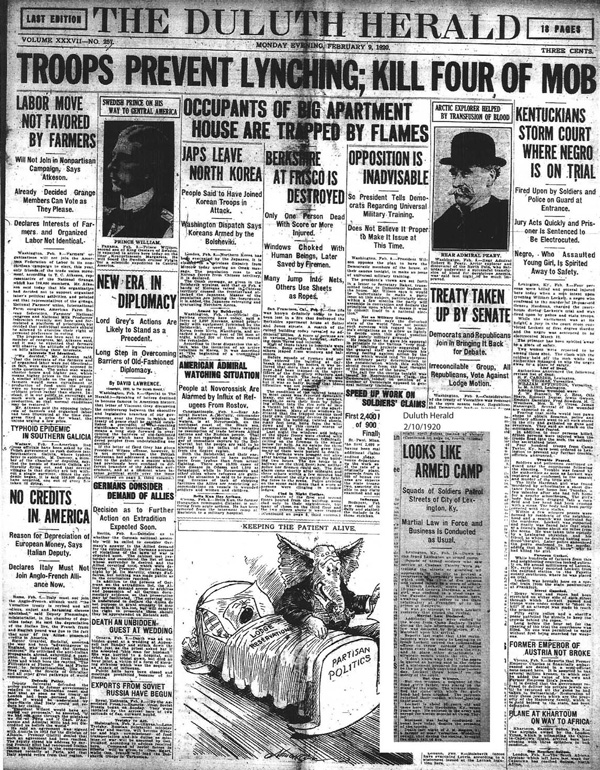 In the 8/11 issue Gary Burt asserts that my "assumption" was flawed in my 8/4 article that as the Duluth Lynchings were about to take place the Duluth police authorities had to know about events in Lexington, KY two months before.  To believe this he must assume that Duluth was not yet connected with the outside world in 1920.
In the KY case, a black man had admittedly murdered a 10 y/o white girl and was on trial in the Lexington courthouse.  A mob formed and armed police and National Guard troops guarded the courthouse.  A machine gun was set up on the steps.
The mob nevertheless charged the courthouse and the defenders opened fire.  Something like 500 shots were fired.  Five people were killed and about 15 wounded.
Rioters invaded sporting goods stores to obtain weapons.  So did the military to secure the weapons.
Federal troops were requested and they arrived by special train the same afternoon.  The commander declared martial law.  More than 1,000 Federal troops were in town, plus the KY National Guard.  The city was shut down, until reason returned.
I confess to merely assuming that Duluth police authorities were aware of such a momentous event.  I could not imagine that the papers had not reported it.
In fact, the headline of the last edition of The Duluth Herald of 2/91920 (the same day as the event) in its "last edition" read "TROOPS PREVENT LYNCHING;  KILL FOUR OF MOB."  The explanation occupied almost a full column.  It was about as complete as the report in the Lexington, KY paper, including the names of the dead and wounded.
The Duluth News Tribune next morning had a full column on its front page with the heading "TROOPS SLAY 5, HALT ATTEMPT TO LYNCH NEGRO."  The Minneapolis Morning Tribune had a front page column (Associated Press byline) headed by "Martial Law Prevails After Lexington Riot."  That afternoon The Duluth Herald had a front page column headed by "LOOKS LIKE ARMED CAMP - Squads of Soldiers Patrol Streets of Lexington, Ky."
Burt should note that Associated Press was founded in 1846 to report the Mexican War and that the Civil War was reported by telegraph.  Associated Press adopted a teleprinter in 1916.
The quality of the Duluth and Twin Cities papers in 1920 is quite impressive.  They were reporting such things as the Russian Civil War, British diplomacy, Japanese troops leaving Korea, post-war matters in Europe, the finances of the former Emperor of Austria, etc.  The reporting may have been better than TV news today.
From my first visit in 1964 I never doubted that Duluth had long been a developed and sophisticated place.  Only the strange passivity of the Duluth police when faced with a lynching threat detracts from that view.  There were National Guard units at Duluth and probably on the Iron Range.  With the fresh example of Lexington, KY two months earlier, the authorities certainly should have called for troops.
Burt seems to attempt to excuse the Duluth police failure by suggesting they may have believed they had no choice but to kill whites or allow killings of blacks.  That is a racist suggestion.  Those blacks were special people, prisoners, utterly helpless, and it is the duty of police (and soldiers) to defend their captives by any means necessary, including with their own lives.  Race has absolutely nothing to do with this duty.