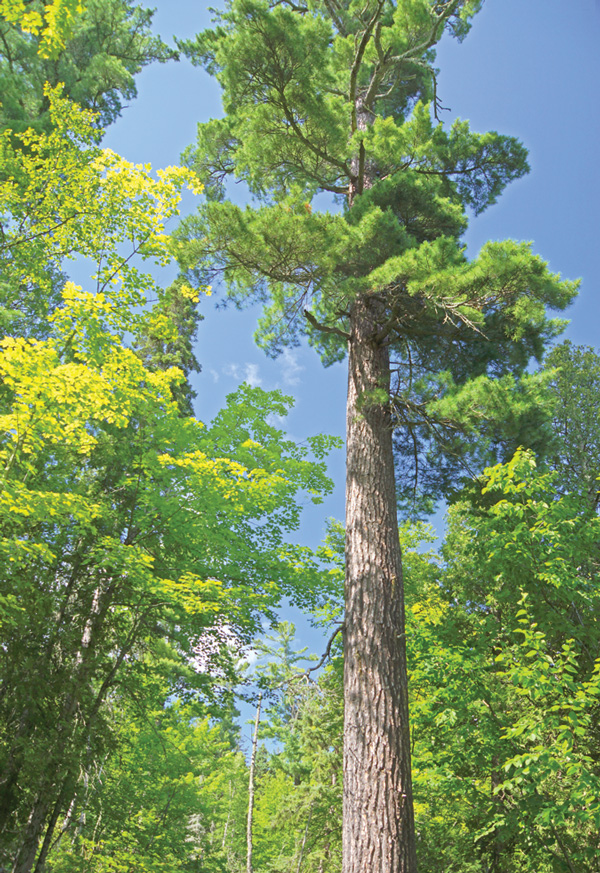 Some of you may have seen and perhaps signed a petition recently circulated in Duluth about the proposed PolyMet Mine. Its focus was the impending transfer of 6,650 acres of water-rich lands in the Superior National Forest to the mining company.
PolyMet needs the property in question because it’s where the copper-nickel-sulfide deposit they want to mine is located. Yes, the ore body is on public land that currently belongs to you and me!
This particular slice of the Superior National Forest is home to lots of plants, animals, wetlands and streams. The Environmental Impact Statement for the project shows how polluted water will drain south to the St. Louis River and Lake Superior. In addition, computer modeling done by experts has revealed that some of the contaminated groundwater from the mine will head north to the Rainy River and Boundary Waters.
I came up with the wording for the petition (main points shown below), and good people here in town helped gather signatures. The request was simple:  Before turning our public forestland over to PolyMet, let’s make sure Congress carries out its responsibility to hold hearings.
Some might argue that we already have had enough meetings on the PolyMet project. But public meetings conducted by state and federal agencies like the Minnesota Department of Natural Resources and U.S. Forest Service are no substitute for Congressional oversight hearings that, by their very nature, are designed to bring greater perspective and a broader level of transparency to the process.
Plus, this is a national issue affecting a national forest and treaty land. It’s not just a State of Minnesota issue.
You will notice that our petition didn’t ask anyone to “take sides” on the PolyMet project. All we asked was to be given a fair shake.
I was hopeful we’d succeed in getting hearings because our own Senator Al Franken sits on a Congressional committee that oversees the privatization of federal assets (like national forestland), and he also sits on the U.S. Senate Committee on Indian Affairs (the land in question is within Tribal ceded territory). In addition, Senator Amy Klobuchar is a member of an important Congressional committee that directly oversees any U.S. Forest Service decisions involving land exchanges.
It should have been a slam dunk to get hearings, right? Guess again! Here’s what happened.
Over the course of about 3 months, 360 or so Minnesotans signed the petition, including 240 Duluthians. Not bad for a small homegrown effort carried out by local citizens (not the billionaires)!
I hand delivered the stack of petitions to the Virginia office of Senator Klobuchar and the Duluth office of Senator Franken in early August. So far there has been no response from Senator Klobuchar, but I heard back from Senator Franken’s staff in Washington right away. They wanted to talk to me about the petition and arranged for a conference call.
When I picked up the phone, I was hoping to hear that Senator Franken was all fired up about pushing for Congressional hearings. But it was not to be.
I was told that the petition was discussed internally among Franken’s staff, and they felt that, if the goal of the petition was to raise awareness and rally opposition to the land transfer, Congressional hearings likely would be counterproductive. Their reasoning was that, since Democrats like Senator Franken are in the minority in the U.S. Senate, any request for hearings probably would not be granted. And, even if he succeeded, the Republicans would get to pick 3 of 4 witnesses and likely stack the hearing with very powerful pro-mining forces like the National Mining Association.
As I sat there and jotted down notes, the chance for getting any sort of objective hearing looked bleak. But I wondered, “Does that mean we cave to the bullying? Or do we stand up and fight?”
I was also told that, if the U.S. Forest Service refused to transfer the 6,650 acres of national forestland to PolyMet’s control, two things were likely to happen: (1) the mining company would file a lawsuit; and (2) if the Forest Service lost in court, it could set a bad precedent jeopardizing additional public lands. It was a fear-driven argument.
I listened carefully to the perspective offered by Senator Franken’s staff, and I appreciated the time they gave me and how they had done their homework. But I must admit that my heart sank. It was clear the Senator would not be pushing for Congressional oversight hearings.
I understood their reasoning. But was it the right decision for the water, the trees, the plants and the wildlife? I don’t know.
The system is broken. All we asked for in the petition was a fair shake, but it appears that the cards are stacked against anyone who dares to threaten a mining company’s interests.
I have not given up hope that we can save that precious forestland at the center of our petition effort. I just wish I knew how. Else it will be “FAREWELL” to 6,650 acres of water-rich lands in the Superior National Forest and ”HELLO” to a scraped landscape and polluted waters.

-The U.S. Forest Service stated in November 2015 that it intends to transfer 6,650 acres of water-rich lands in the Superior National Forest to PolyMet Mining Corporation (Toronto, Ontario/Canada), in exchange for other lands, so that the company can construct a new copper-nickel-cobalt-platinum-palladium-gold sulfide mine. The final decision is expected in October 2016 and will be subject to 30-day congressional oversight requirements.
-According to computer modeling supplied by PolyMet and others, contaminated water from the PolyMet mine will travel both south (to the St. Louis River/Lake Superior watershed) and north (to the Rainy River/Boundary Waters Canoe Area Wilderness watershed).
-State and federal agencies that prepared the mine’s Environmental Impact Statement (EIS) stated repeatedly therein:  “Water quality modeling performed in support of this Final EIS indicates that water treatment systems would be needed indefinitely at the Mine Site and Plant Site.” There is some disagreement over exactly how long this will be, but in 2013 the agencies repeatedly stated, as documented in Appendix C of the Final EIS: “Modeling predicts that treatment activities will be a minimum 200 years at the Mine Site and a minimum of 500 years at the Plant site.”
-The ore body that PolyMet intends to mine is on water-rich public land in the Superior National Forest, not private land. Equally important, the land is within the 1854 ceded territory where the Lake Superior Ojibwe retain treaty rights. For these reasons, members of the public, both Native and non-Native, are entitled to have a say on what happens.
-Senators Franken and Klobuchar, due to their respective Senate Committee appointments, are in a unique position to make this happen.