The Potluck Communists: Love & Cherish Everybody 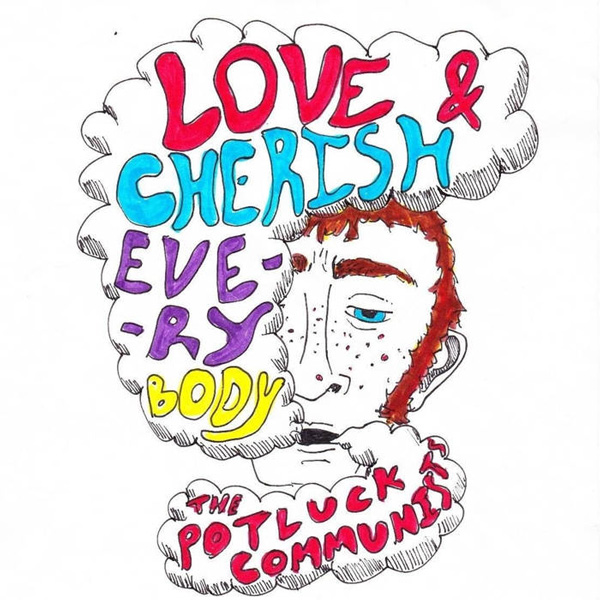 There’s really not a whole lot of ska bands in the Twin Ports area. One group that plays regularly, Woodblind, hinges on ska but doesn’t bring the horn section that is fairly common to the genre. The Potluck Communists have been playing for around three years before this release titled “Love & Cherish Everybody.” Unfortunately, the band played their final show before going on an indefinite hiatus upon losing guitar player and vocalist Nick Carlson-Becklund. The latest album can be found on Bandcamp and unless you run into one of the former members who still have a CD, it’s likely that’s the only way to listen to it.
Ska goes back to Jamaica as early as the 1950s and is related to reggae but certainly combines other more upbeat elements. The ska that many think of today is referred to as “third wave” ska. For me the big upswing of this niche in the genre was with bands like Mustard Plug and Skankin’ Pickle. Bands such as Mighty Mighty Bosstones and Reel Big Fish found some limited mainstream success; enough to get played on MTV and be featured on some major tours. Ska and punk certainly have blended with bands like Operation Ivy, Rancid, and a number of Nofx songs. The early 90s were good years for ska.
The album starts with the track “Doom.” This mostly instrumental song fits the format of what ska music is: up-stroked guitar chords, walking bass lines, drums with a quick hi-hat and snappy snare, and a catchy horn section. Don’t forget the mouth noises “shicka, shicka, shicka,” and of course a little of the standard “pick it up, pick it up.” I’ll be straight up that this isn’t the most dialed down recording I’ve ever heard, but there is some charm to it. Was ska ever meant to be super polished? I’ve actually owned a b-sides Operation Ivy album that says “play loud” because of the harsh recording techniques. In that sense, this album was recorded much better than that. I guess the horns could have been tighter in this particular track, but this music is fun and I think that’s what really shines about it.
Songs like “Down a Peg” keep up the fun with the story of a guy who is in a hopeless one-sided relationship where he is being used. It might not be exactly fun for the character in the song, but it’s amusing for the listener. “The money in his pocket doesn’t last for long/the things he bought her at the store and pretty soon it’s gone,” goes a part a verse.
The track “Got a Light” starts with a slick bass line which holds down this really upbeat song that is designed for some various levels of dancing from straight up skanking (a dance style where the person dancing throws one foot out in front of the other rhythmically while shuffling their arms bent at the elbow and keeping low at the hips). The reason to stay low at the hips is in case things break out into a little bit of slam dancing or full out moshing. There’s plenty of head bobbing grooves happening in the song as well.  The next track “B.C.” likewise has plenty of grooving and skanking worthy things going on.
After listening to this album I feel a little bummed out that I didn’t make it out to see them because as I said before, they sound like a lot of fun and a band like this is really meant to be seen live. The album in itself holds faithful to the nature of a lot of the “third wave” ska that I mentioned earlier. My main hope is for the members of this group to rebuild this current project or perhaps move on and work up new material for a new band. I would like to see them keep up playing ska because its a fun genre that will never truly get old and there’s not a whole lot of bands doing that around here. I’ll be very disappointed if they start playing bluegrass/folk/roots music. For some reason I don’t think that will happen.