Packing for a Trip 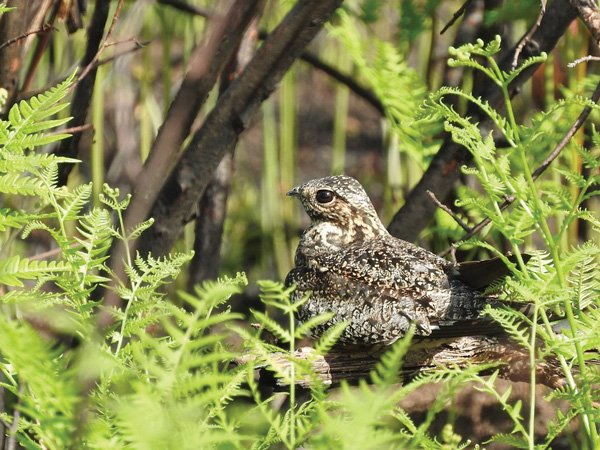 Mind racing, I drove through the crisp, clear, late-summer sunshine. I knew that red maples flamed in the swamps and the ditches were golden with sunflowers and senescing bracken ferns. I didn’t notice them. All morning I’d been darting around the house like crazy, packing for a trip to the Boundary Waters. Now, I was on my way into town for one last round of forgotten things.
Suddenly, a flash of black and white snapped me into the present. A medium-sized bird with long, pointed wings and a short, compact body darted above the road. One white stripe across each dark wrist flashed as it dove and swooped erratically. Soon a second, a third, and several more acrobatic birds appeared in the clear, blue airspace above trees, homes, and the Namekagon River.
The diet of common nighthawks consists almost entirely of flying insects. There’s a good reason that their fall migration has started just when I’m embarking on a wilderness expedition. As the bugs die off, canoe camping becomes more pleasant, and the nighthawks must move on. In addition, nighthawks (and humans) are unable to go into torpor on chilly nights, so must carefully avoid temperatures too cold for their respective down coverings.
Just as the shortening days and crisp nights trigger nighthawks and other birds to start their migrations, this weather triggers my itch to launch a canoe onto some wild chain of lakes. I love preparing for canoe trips in the Boundary Waters of northern Minnesota. I weigh out the portions of dried pea soup mix (4 oz. per person), measure out the macaroni noodles (1 cup per person), and thoughtfully pack a little bottle of hand sanitizer in the bag with each roll of toilet paper. Once I’m on trail, a few handfuls of late-ripening raspberries or blueberries, or a steaming cup of sweet gale tea will supplement the dried foods.
Nighthawks use a similar strategy. Like most birds, they build up stores of fat to fuel their trip, but they also stop and snack on local foods along the way. Their beaks look tiny, and hardly protrude beyond their heads, but open into cavernous mouths, well-suited to scooping insects up mid-air during their buoyant, spurtive flight. Nighthawks are attracted to clouds of insects that gather around streetlights at dawn and dusk, but seem to hunt by sight and can’t forage after dark. Only because of migration did I get to see this flock in broad daylight, and so close to the ground.
For several days I’d been making my own spurtive flights up and down the stairs, to the kitchen, my bedroom, and back to the basement, rounding up gear and checking the list twice. Seeing these birds gave me some much-needed perspective. While my trip will only last four days and cover 400 miles driving plus 20 miles paddling, nighthawks have one of the longest migration routes of all North American birds. From northern Canada, they travel 2,000-6,000 miles south to their winter range in Argentina.
I’ve started to look forward to seeing their migration as I’m coming or going from a wilderness trip. Last year at about this time we saw clouds of nighthawks migrating along Lake Superior as we drove back from Grand Marais. This year, the migration watchers at Hawk Ridge in Duluth already counted 4,140 nighthawks on August 14, and 2,020 more on August 15!
These birds will arrive on their wintering grounds in October, spend a few months, and by the end of February, they’ll head north again. Nighthawks are one of the latest arriving spring migrants, due again to their intolerance of cold and need for flying insects.
Last June, students on the Wisconsin Master Naturalist course spotted a nesting nighthawk during our banding expedition in the Moquah Barrens. The bird flushed, or we never would have seen it. Two speckled eggs in a scrape—no nest—lay revealed on the barren, recently-burned earth. Mama sat nearby, camouflaged perfectly as she perched along a branch surrounded by ferns. Just 50 days after hatching, those chicks must be full grown and ready to take their first trip south.
Tomorrow morning at dawn, a van full of wilderness travelers will head north. In the gray morning light, we’ll be crossing paths with flocks of nighthawks flying south. Safe travels to all.