Unions: The Folks That Brought You the Weekend 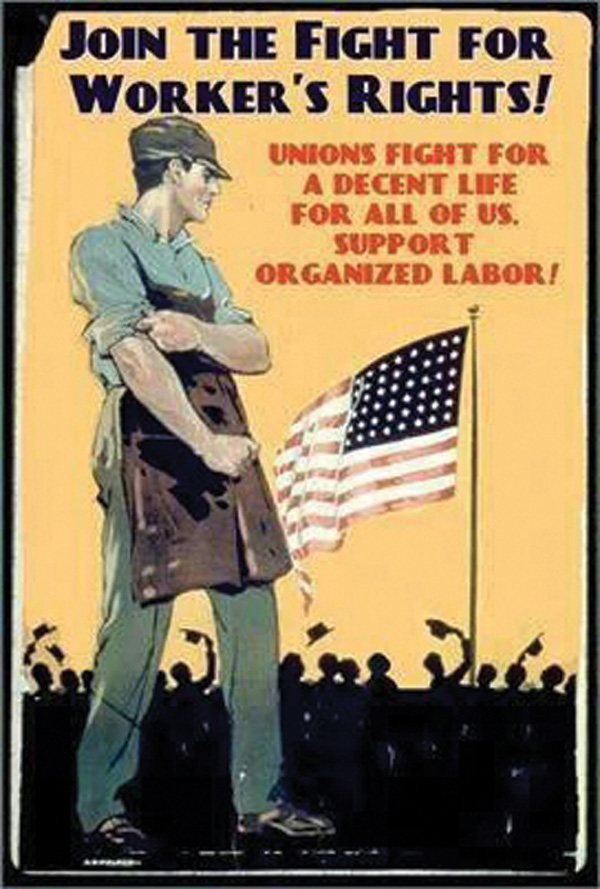 “Unions, the folks that brought you the weekend” is the message of my favorite bumper sticker. This is a bit of history that all of us should know. While enjoying the long Labor Day weekend, we should remember the contribution unions and union activists have made to our freedom and well being.
We are all better off because of unions even if you have never been represented by one.  A good example is the weekend. Before the Labor Standards Act of 1935, work weeks were 60 to 80 hours. In the late 1800’s everyone, including children, were expected to work 10 or 12 hour days six days a week. Today, because of unions, we have laws governing work hours and 40 is the standard with many workers receiving overtime for extra hours worked
The weekend did not come about because employers cared about their employees. Employers had to be forced, through laws and union contracts, to allow workers time for their families or some social life. The struggle for the 40 hour week took many years, and many people worked, sacrificed, and even died in the effort.
Many other commonly expected employment benefits are the result of unions setting the standard. Health insurance, sick leave, vacations, retirement plans, and coffee breaks are examples. These are now common for union and non-union employees.
But union membership is declining. Unions reached a peak of 35% of the workforce in the 1960s.Today only about 10% of workers are unionized.  As a result the average work week has been getting longer. Pressures from employers are undermining the standard. In many workplaces you are not a “team player” if you don’t work extra hours. Cell phones, home computers and email connect people to work during off hours. Employers are reclassifying jobs as “professional” to avoid paying overtime. The pressure to make more, get promoted, or even keep your job creates a 24/7, work-first mentality that pressures people into working longer and harder.

It is no coincidence that as union membership has declined employers ability to impose longer work hours is coming back. Without unions, workers have no voice in the workplace. They have little protection if they oppose company requirements. This is also true for wages and other benefits. Since 1973 average worker wages, adjusted for inflation, have been stagnant. Workers in right-to-work states earn an average of $5,680 less a year than workers in other states with union protections. Benefits like retirement and health insurance have been dropped by many employers or the costs shifted to workers.
Employers as well as right-wing politicians and their super wealthy corporate backers have waged a 40 year battle to weaken and dismantle unions through “right to work” laws. They have been largely successful. Governor Walker in Wisconsin has essentially broken public employee and teacher unions. The legislature recently passed right to work laws and restricted prevailing wage laws that weaken private sector unions.
In addition to increasing work hours and lowering real wages and benefits, even the concept of a “job” is disappearing. The employer-employee relationship is under attack. More people are “contingent”  workers doing temporary jobs. More workers are being called “independent contractors” (that is self-employed) and denied even the legally required protections of unemployment insurance, workers compensation and Social Security coverage.  An estimated 53 million Americans, or one third of the workforce, works in this “gig” economy. This is partly driven by digital technology that allows working as needed from anywhere. But it also reflects employers efforts to avoid the costs of workers.

In the recent book “People Get Ready, The Fight Against a Jobless Economy and a Citizen-less Democracy,” Robert W. McChessney and John Nichols discuss changes coming to our economy. They say the technological revolution with increasing artificial intelligence and robotics will severely affect jobs. It will impact high wage service and professional jobs as well as manufacturing jobs. The end of work as we know it will combine with declining wages, growing poverty, and increasing inequality to produce permanent economic stagnation.
A complete restructuring of our economy and our political system will be needed to avoid this disaster. McChessney and Nichols say this will require rebuilding our “democratic infrastructure” to ensure the benefits of technological progress are shared rather than enriching the few. They advocate constitutional changes to voting rights and the Citizens United decision giving corporations the rights of people. Restoring unions as a bargaining tool is another needed change.
Increased citizen involvement in the political process is essential to ensure a fair economy and a democratic society. We the people have the power to create positive change if we  choose to use it. We have the power to vote. We have the power to buy or not buy. Sweatshops would not exist if we refused to buy their products. Jobs would not be leaving Wisconsin if we refused to buy the foreign imports. We can reject the “divide-and-conquer” politics of union bashing.

So TGIF. While you are enjoying your brat and beer remember to thank the unions that brought you the weekend.

You can thank a union by attend one of the several Labor Day events.