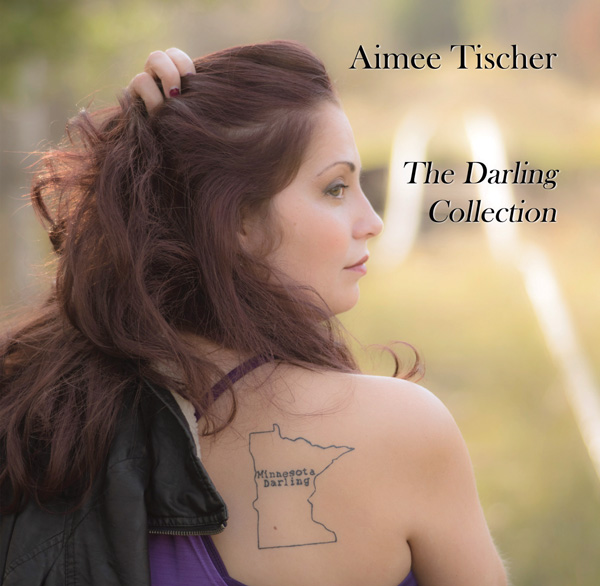 This will be the third winner of the Beaner’s Singer-Songwriter contest for me to review this year. I have to admit that I haven’t seen Aimee Tischer play live before and I don’t know that much about her. I do know that she has been playing fairly regularly in the Twin Ports area for the last year or so and her win in the Beaner’s 2015 Singer-Songwriter contest sets her along side artists like Dave Mehling and Bridget Ann who have recently released albums.
In her bio she mentions being influenced by female artist such as Dolly Parton, Amy Winehouse and Norah Jones. I don’t really see that and with her debut EP album “The Darling Collection,” it comes off as more electronic indie pop over the works of her said influences.
After winning the songwriter competition, Tischer won a little bit of studio time at Beaner’s. Beaner’s owner, Jason Wussow, actually produced this interesting and short album. I’ve heard some hit and miss things come out of that studio. Mostly I accredit this to artists having fun and accepting anything that sounds alright without being that critical of themselves or having someone there to say, “try that again, but this time do…” Sometimes that works out, other times, it ends up with some stark and easily avoidable errors. Whatever happened on this recording turned out well, and I don’t have anything to really gripe about on that front.
Continuing on the recording side of things, this album has some fun thought put into it. I’d say that this especially true with the layers of keys and vocals. This album is a little unexpected for me. This happens, someone says they’re a singer-songwriter and I just assume they play their guitar and sing about someone who broke their heart and they’re still whining about it years later even if their circumstances have totally changed since the incident.
The first track is titled, “Darling Come Home.” There is no acoustic guitar or harmonica, the things you might expect from a typical singer-songwriter album, actually it’s an electronic song. It kind of reminded me of the song “True Affection” by The Blow and some other material by that group. There is an old school Casio sound with keyboard type generated beats. The slightly cheesy bass notes kind of make the song. There’s nothing wrong with this in my book. Turns out Tischer uses a microKorg, these are really a lot of fun and can emulate a variety of sounds that most people can deal with. True keyboard junkies will start looking at full sized Nords or Rolands, or going to modular units for those with full on keyboard obsessiveness. While there is a philosophy of “you get what you pay for,” I’ve always felt “if it works, then what’s the problem?” That is obviously debatable.
The song is lead by Tischer’s vocals, but the keyboard sounds keep the song rather light. “Your hands are torn and your knees are weak, your eyesights gone and you’re past your peak, you can’t work know so be with me, darling come home to me,” sings Tischer in a verse. The song is about a man who is worked down to the bone and is offered an entreaty for him to come home. Despite the largely electronic instrument backing of the song, there is something organic in it’s overall feel, mainly coming back to the vocals and lyrics.
The next track “Silhouettes of Summer” has a little more of a foreboding feel to it. It reminds me a little of the band Snake River Conspiracy, but without the industrial edge. There is a certain intensity that stays contained. The end of the track brings out layers of vocals that I’m guessing might be reproduced live because Tischer notes a Boss RC-300 Loop Station among some of the equipment she uses.
The track “Goodbye Little Girl” also uses underlying looped vocal patterns. The song could be a country tune, but the way it’s laid out is quite experimental. There’s some stringed instruments in the mix such as electric guitar and banjo, but primarily the experimental percussion, electronic elements and vocals, both sung and looped, carry the song.
In ways I wish this album was longer, to end the album with the track “Home” in just a four track album, it seems that we haven’t been led out on a long enough journey to be asked to come home and then to arrive home in such a short time. The song is welcoming and rather simple. It reminds me a little of the ending of Low’s “Starfire” with the backing vocal refrain. There’s certainly an emotional aspect to the song. Not enough to get under my skin, but certainly pretty and well done enough.
There are two things I would have suggested with this album. First, I would have liked to just see how Tischer moves about with more songs. I got a little bit, I think it’s alright, I want a little more of a listening experience. Studio time doesn’t grow on trees, so the length of the album is understandable. Next, while her songs are good and create a certain feel that seems meaningful, I’d like to see more dynamics. The last track is maybe two chords? There are some great two chord songs, but playing around with song development might be something to look into for her. Stops, starts, build ups, break downs, bridges, there’s not really much of that in the album. Of course I shouldn’t talk, I haven’t won a Beaner’s singer-songwriter contest.