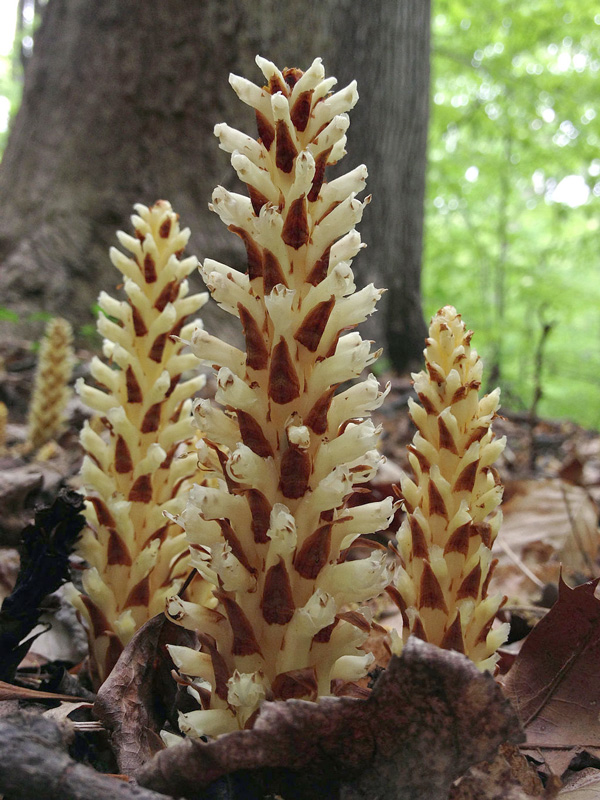 The flowers of bear corn are mildly pretty, if a little odd as they sprout directly from the ground. Photo by Fritzflohrrenolds, Wikimedia Commons.

“Stopping!” I shouted to the riders behind me. We all skidded to a halt where the singletrack mountain bike trail crossed an ATV trail. I’d spotted something weird in the woods and wanted to check it out.

The Esker Trail, near Cable, WI, provides some pretty amazing scenery and a great ride, hike, snowshoe, or fatbike. About 14,000 years ago, near the end of the last ice age, this trail was buried under a mile or more of glacial ice. Rivers of meltwater coursed along the glacier’s surface and plunged downward through crevasses, or vertical shafts called moulins.

The rivers of meltwater didn’t just disappear, though. Once one poured down the moulin, it began to flow under the glacier. Punky ice above was easier to erode than frozen ground below, so the river created a tunnel for itself in the glacier. Snaking along, often with several sinuous channels braided together, this sub-glacial river dumped tons of sediment into its riverbed. In response, the river’s tunnel expanded higher, and the water deposited even more sediment. Once the ice was gone—having gushed away in a torrent of melt—we were left with a long, sinuous, steep-sided ridge called an esker. Which just happens to be a great place for mountain biking.

Eskers make great habitat, too. Pines and oaks thrive in the well-drained soils. We biked through grove after grove of these trees, with glossy, ripe blackberries lining the trail. All those oaks occasionally attract a weirdo, though, and that’s what caught my attention. Dark, scabby blotches marred the pale khaki leaf litter. Based on a series of recent “nature identification” requests I’d had recently, I had a good guess about their origin.

Bear corn, also known as American cancer root, is a strange looking plant. For one, it doesn’t have chlorophyll, and no part of it is green. In addition, its flower is a thick stalk crowded with corpse-white blossoms that emerges directly from the ground and reaches no more than a foot high. Once the flowers are pollinated by flies and bees, they are replaced by round, white fruits. In addition to the fact that bears and especially deer eat the fruits and disperse the seeds, this stage supplies the name “bear corn.”

Once those seeds are dispersed, things really get weird. Bear corn’s multitudes of seeds are minuscule—somewhat reminiscent of fungal spores—which also happen to be plentiful in pine and oak woods at this time of year.

(Case in point: a previous skidding halt on the bikes had been caused by a big patch of apricot-colored chanterelle mushrooms, followed by pure white Russula mushroom. The first were gathered for dinner, the second was thrown against a tree trunk to watch it explode. )

As with fungi, the bear corn’s seeds disperse easily, and can stay dormant-but-viable in the soil for about 10 years. This gives them the best chance possible to accomplish what seems like an impossible task. The tiny seeds have almost no energy reserves, and no means of producing food for themselves (that would require chlorophyll). If a seed is to succeed, it must find food immediately upon germinating, or die. The food it seeks is sugar stolen from an oak tree.

Therefore, the seed delays germination until it senses chemicals exuded from oak roots. The chemicals don’t travel far through the soil, so if a seed gets the go-ahead, salvation must be near. A baby root called a radicle grows toward the signal, guided by chemotrophic attraction. Once contact is made with an oak rootlet, the bear corn’s own tiny root immediately starts sucking sugars from its host.

Using sugars from the oak’s photosynthesis, the bear corn forms a nodule on the root. The nodule grows and multiplies, gaining strength until it can support a flower structure and send its own miniscule minions into the world. Then the fruiting stalk withers into the weird, crumbling, black patches we’d just encountered.

This parasite doesn’t seem to have a noticeable negative impact on its host, but why would an oak allow a freeloader to steal its hard-earned sugar? The answer may lie with those mushrooms spotted earlier. Oaks readily form beneficial mycorrhizal relationships with dozens of species of fungi. The additional nutrients and water that the fungal mycelia provide may be one reason that oaks can survive in dry, sandy soils. Perhaps the bear corn’s seeds duplicate a fungus’ flirtatious attempts to initiate a relationship, and the oak lets down its guard.

From sandy glacial sediment grow drought-tolerant trees which are assisted by beneficial fungi and robbed by sneaky imitators. As we ride off down the trail, it’s clear that this esker’s sinuous path connects more than just points on a map.