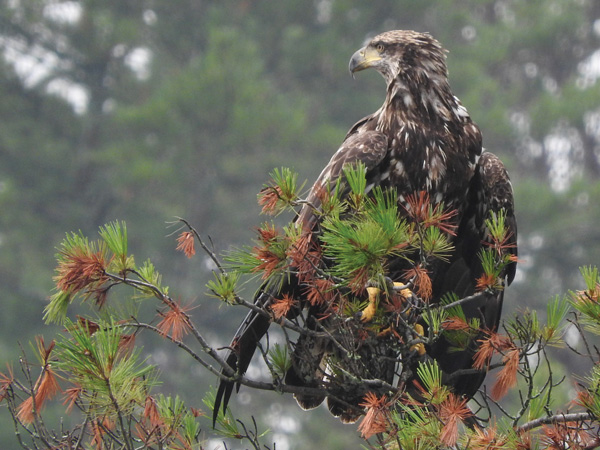 With each successive molt, eagles get closer to their adult plumage. During their third summer, eagles are very mottled with an osprey-like eye stripe. In the next few years, this eagle will grow white head and tail feathers and become a full adult. Photo by Emily Stone. 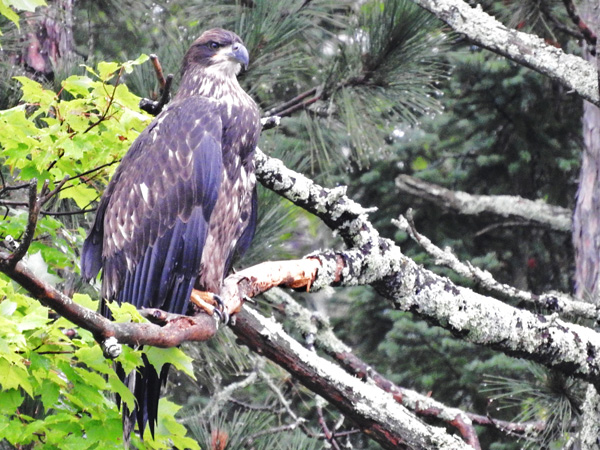 The mist abated, but dense clouds still hung low over the lake, their wispy undersides tickling the dark tips of trees. As we drew near the narrow, piney peninsula at the north end of Lake Owen, a bit of white emerged from the gloom. Through my camera’s zoom, I spied on a scruffy-looking adult bald eagle, its feathers matted from the damp weather.
Although the supra-orbital ridges above eagles’ eyes often make them look fierce, today the expression seemed to lean more toward grumpiness. That’s just projecting our emotions from the gray day, though, since the ridge of bone is an adaptation that protects their eyes from injury, glare, and perhaps even rain, but doesn’t truly convey mood.
This adult eagle had more reason to be tired and grumpy than we did, though, since its very large chick was begging for food just around the corner. Our raingear-clad Loon Pontoon Tour puttered toward the loud chirping, as we scanned the large clump of sticks high in a red pine tree for any signs of movement. During the past few weeks I’ve spotted moving feathers in the nest. Not a great view, but still a fun sighting.
The nest was quiet, though. Where was the chick? There! Midway up a dead, lichen-covered pine, about 40 feet from the nest, sat the chick. The hulking, brown figure could hardly be called a chick, though. It was a recently fledged juvenile who had grown its first set of real feathers and left the nest. Most resources agree that bald eagles typically fledge around 10 weeks of age. Counting back, that puts its hatch day in early June.
Though full-size, this young eagle looked quite different than its majestic parent with the snow-white head and tail. Shades of brown covered its head and body, but the damp day had matted some of the feathers and revealed a mottling of white where the basal portions of contour feathers showed through. Its eyes and beak were dark, too, in contrast to the yellow facial features of an adult. Dark wing and tail feathers drooped low.
Like gangly teenagers, juvenile eagles look bigger than their parents. In some cases, a well-fed youngster actually may weigh more than their harried caregivers, but that doesn’t seem to be common. Instead, their larger appearance is due to longer flight feathers, which help them compensate for a lack of flying skills. Their next set of feathers will decrease in size as a nod to increased agility. Those new flight feathers come in gradually, though, and during the eagle’s second summer its wings and tail sport both longer and shorter feathers.
It may seem odd that our Loon Pontoon Tour spent so much time watching an eagle, but as with everything in nature, the lives of these two species are quite connected. For one, eagles are the main predator of adult loons, and also attack loon chicks. Loons even have an eagle-specific alarm call to warn their chicks of danger. The animosity between the two species may be due to their shared habitat and competition for fish.
They probably don’t realize it, but these adversaries share many common enemies as well. Water pollution, habitat loss, harassment by humans, and lead poisoning are just a few.
Loons and eagles also share quite a few elements of their life histories. Both black/brown-and-white birds eat mainly fish, are formidable predators, raise just a few young and care for them diligently, take several years to reach maturity, and look distinctive while immature.
Last week, on a different lake, we spotted three juvenile loons in their first true plumage. Just like this young eagle, they were mottled brown and white with dark eyes. Those loons will migrate to the Gulf of Mexico this fall, and stay there for three to four years. Once mature, they’ll molt into their snazzy adult feathers and fly north. If they’re lucky, they may start breeding immediately, but most loons don’t earn a territory until age six.
Eagles have a similar youth, with two main exceptions: they wander widely during their immature stage instead of staying south, and their plumage changes a little bit each year until they become adults.
Not far down the lake, we spotted a great example of this. An immature bald eagle, hatched in a previous spring, perched atop a white pine tree. In contrast to its younger cousin, this eagle had quite a few pale feathers on its head and neck, with a dark eye stripe reminiscent of an osprey. In addition, its beak was a lighter shade of gray, and had more yellow at the corners. Its eye color was lighter, too. All these characteristics identify this bird as a 2.5 year-old, who would have been born in spring 2014.
By their fourth summer, as 3.5 year-olds, eagles have near-adult plumage, with pale heads and tales that still show some gray and brown flecking. Over the next two molts their white areas just get more pure.
Despite the drizzle, fog, and low clouds (or perhaps because of them) both loons and eagles were cooperative for our tour of the lake. What a treat to observe these two majestic birds and learn a little more about their lives!