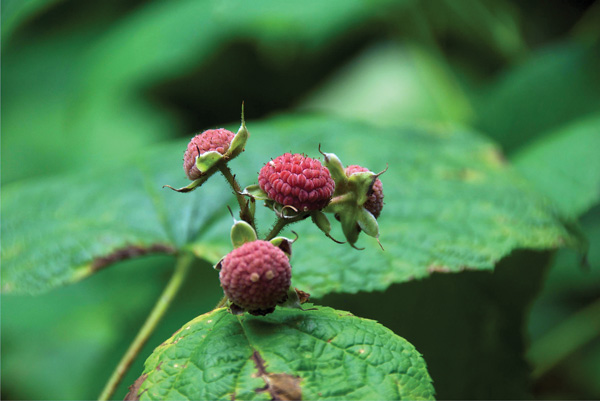 Thimbleberry flowers blossom sequentially all spring, which means that the fruits ripen one at a time, too. Photo by Larry Stone.

We decided to take the long way home, which turned out to be the right choice. The ravine along Chester Creek in Duluth, MN, was cool and shady and a much nicer stroll than the sunny side streets on a hot afternoon. This section of the Superior Hiking Trail is in the middle of town, but feels like a wilderness area. Lush vegetation lines the steep hillsides and a variety of flowers bloom through the summer.
Our casual conversation stopped mid-sentence, though, when I spotted a splash of vivid red against the green leaves. Thimbleberry! In an instant, the red was gone—but its bright flavor burst onto my tongue. I picked another, and another. The whole trail was lined with ripe berries, and more glowed in the deep shade off trail, too. At first this slowed us down, as we stopped to pick more every few feet and revel in the intensity of their sweet-tart flavor. Then, when we realized the abundance of the crop, we sped up again, vowing to come right back with buckets.
Thimbleberries are a thornless member of the Rubus genus, related to raspberries and blackberries. The delicate, red berries are big, and come cleanly off the plant, leaving a cavity big enough for your finger—hence their name. Their giant, soft, maple-shaped leaves often grow along latrine trails in the Boundary Waters, and make the best wilderness toilet paper available.
An hour later the quart-sized yogurt tubs hanging around our necks were full of the pungent fruits. The second half seemed to take much longer to pick than the first half, though, since the berries smush down under their own weight. Because of their fragility, the berries really can’t be sold fresh. Eating them straight from the bush is the best plan.
If you’re lucky enough to get several cups of thimbleberries, their jam is a treat. It’s hard to find them in that kind of abundance outside of the Upper Peninsula of Michigan, though, and for years I’d eaten thimbleberries a few at a time, and “settled” for making blueberry jam. Not long ago, I broke down and spent eight dollars on a small jar of thimbleberry jam from a roadside stand in Copper Harbor, MI. It was delicious.
Michigan’s Upper Peninsula is the center of thimbleberry products in the Midwest. Jam is a substantial cottage industry up there. Northern Minnesota also contributes, but Wisconsin has a limited range.
If you look at a map of thimbleberry’s distribution across the continent, the Great Lakes region makes up just a tiny blip on the map, and is completely separate from the other thimbleberry populations. Another, even tinier population of thimbleberries grows in the Black Hills of western South Dakota, like an island in the prairie sea. Then the Rocky Mountains and the West Coast show a much bigger area of abundance.
These disjunct populations have long been a curiosity to scientists and botanists. How did these plants get separated from their friends? One theory (as far as I understand it) is that not long after the glaciers melted, thimbleberry would have enjoyed the cool, damp climate it prefers across much of the continent. Then, about 9,000 to 5,000 years ago, the climate warmed. During this Holocene Climate Optimum, warmer, dryer conditions forced thimbleberry out of the arid Great Plains. It was left to survive in refuges—like areas west of the Rocky Mountains’ rain shadow, at higher elevations, and near lakes—that still provided for its needs.
Thimbleberry isn’t the only plant affected this way. A crazy, spikey plant called Devil’s Club grows mostly in the Pacific Northwest, with a disjunct population on Isle Royale in Lake Superior.
Weather and climate still impact thimbleberry every year. Warm spring weather facilitates successful flowering and pollination, and wet weather promotes tastier berries. This year was perfect! We went back to the patch again the next evening. All told, we made 13 jars of delightfully tart, ruby red jam. I feel absolutely, extravagantly, rich.
What a good idea that was, to take the long way home.
How calmly, as though it were an ordinary thing, we eat the blessed earth.” –Mary Oliver, “Beans Green and Yellow”

For over 45 years, the Cable Natural History Museum has served to connect you to the Northwoods. Come visit us in Cable, WI! Our new phenology exhibit: “Nature’s Calendar: Signs of the Seasons” is now open.
Find us on the web at www.cablemuseum.org to learn more about our exhibits and programs. Purchase Emily’s new book at: http://cablemuseum.org/natural-connections-book/.