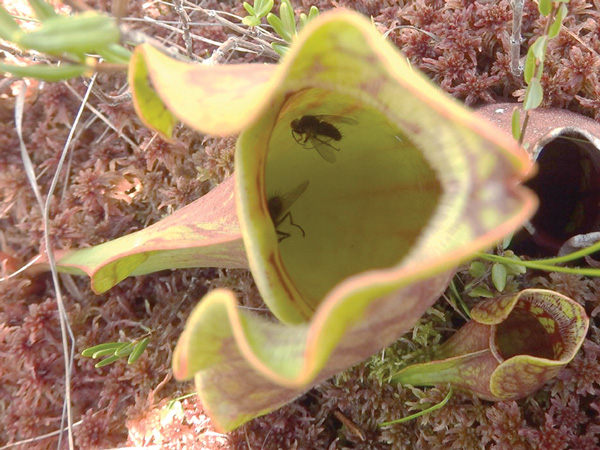 Two flies float helplessly in the clever trap of a pitcher plant leaf. Before long, they will be decomposed by a community of invertebrates and microorganisms, and their nutrients absorbed into the pitcher plant’s leaf. Photo by Emily Stone.

The glossy black water in the moat around the fen licked my toes again this week. This time, after I stepped onto the relative security of the spongy bog mat, I reached back to heave a camera bag across, too. Teetering across the branch bridge came two camera men, a sound guy, a geologist, a few bystanders, and three teenage TV stars from the nationally syndicated kids’ show “Aqua Kids.”
During their Great Lakes Adventure, these kids wanted to see a bog. We decided that a poor fen was close enough, and I knew of a lovely one to show them. Soon after we’d crossed onto the firmer mat of vegetation beyond the moat, someone almost stepped on a beautiful clump of oddly-shaped leaves. One of the kids exclaimed in wonder, and asked me if this was indeed the famous pitcher plant. It was, so of course we now had to get the same question on camera. Backing up a few paces, we staged a meeting in the fen by walking in from opposite directions and feigning surprise. Our paths crossed perfectly at the elegant clump of pitcher plants with three tall flowers and a bouquet of red-veined leaves.
As I explained that the acidic, low nutrient habitat of bogs and fens drives the pitcher plant’s need for nitrogen and its resulting carnivory, I poured the contents of one water-filled leaf into a clear vial. I think I may have squealed in excitement. (You’ll have to watch the episode when it airs in November to find out for sure. Check for local show times at www.aquakids.tv) Two big flies floated at the top—one dead and one mostly dead. Those were soon to be prey, no big deal. Near them hovered a half-inch long, pale, segmented sea monster. It was this flesh fly larva that triggered my glee.
Have you ever read about something new, and then a short while later encountered it for real? I don’t know about you, but I love that feeling of a dream come true. I’d recently learned about this creepy tenant of pitcher plants in the wonderful book North Shore by Anderson and Fischer. Now here was the critter, right on cue.
Flesh fly larvae hatch while still inside their mother, and she deposits one wiggling baby in each pitcher plant leaf. If by accident two larvae end up in the same tiny pool, well, let’s just say that one leaf ain’t big enough for both of them.
Flesh fly larvae act as the pitcher plants’ teeth. Like Cookie Monster, they shred their food ferociously and let the crumbs fall where they may. Luckily, a cleaning crew is on the job. Tiny mosquito larvae of a species that only lives in pitcher plants filter feed on the suspended crumbs, surfacing occasionally to breathe. The habitat in a pitcher plant pool is so rich and rewarding that that larvae store up extra energy. The females of these well-fed larvae metamorphose into adults who do not need a blood meal in order to lay eggs. Now those are mosquitoes I can appreciate.
We all oohed and aahed at the contents of the vial for a moment, and then I pulled out my knife. Very carefully I slit the pitcher plant leaf all the way from its slippery, nectar-laden lip; down the red-veined, slightly sweet side; to the narrow tube at its base. Ewww! we shouted in delight as a black mass of dead insect parts writhed in the sun. The dead stuff wasn’t moving, of course, but their decomposers were.
Down here, where the leftovers settle, midge larvae draw their oxygen directly from the water. With powerful mandibles, they break down the insect bodies even further, releasing more crumbs to the mosquitoes, and plenty of nutrients to the pitcher plant.
This trifecta of larvae is a classic example of resource partitioning and finding your niche, but there’s even more to the story. A whole community of microscopic rotifers, mites, protozoans, and bacteria feed on the leftovers and each other. You might think that the pitcher plant would resent all of these freeloaders. In truth, a diversity of organisms increases both the digestion rate and the availability of nutrients. The pitcher plant absorbs plenty of good stuff through special cells deep in the bottom of its leaf cup.
The kids, the cameramen, and I soon moved further into the fen, exploring the dainty yellow flowers of horned bladderworts, the glistening leaves of sundew, and tart bog cranberries. Throughout the day I was impressed by their genuine enthusiasm, intelligence and humor.
Finally, exhausted, I retreated to the shade to share some parting words with the camera. “Thank you Aqua Kids,” I smiled, “for helping me get even more people excited about bogs and fens!” Just like the critters in a pitcher plant, I think we made a great team!

Find us on the web at www.cablemuseum.org to learn more about our exhibits and programs. Purchase Emily’s new book at: http://cablemuseum.org/natural-connections-book/.