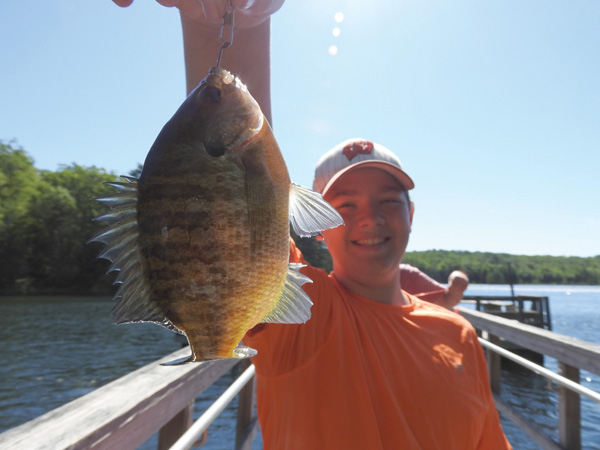 I lay awake in the dark as sheets of rain and a few pebbles of hail battered the windows. Wave after wave of storms moved though, each one increasing my sense of foreboding. With each successive burst of thunder and rain, I first thanked my lucky stars that the canoe trip hadn’t started a day earlier, and then mulled over the possibilities for morning.

The Museum’s fifth annual canoe trip for 12-18 year olds was set to launch on the Namekagon River at 9:00 a.m. on Tuesday. Nine boys had signed up—a record number—with more than half returning for their second, third, or fourth year on the trip. We were all looking forward to the adventure. Even if the river isn’t too high, I thought, we’ll have to be extra careful about new trees slumped across the channel.
Morning news reports of the historic storm, bridge collapses, and 10.5 inches of rain quickly squashed any ideas about paddling the river. We gathered the boys and their parents in the break room to come up with a plan B. We could cancel it, I suggested, or camp in a campground and cut the trip down to one night. But the boys wouldn’t compromise; they wanted their two nights in the woods no matter what. So, after being turned back by a road closure on the way to the campground on Lake Namakagon, we ended up with Plan C—a campground on Lake Owen.
Seconds after the van doors opened, the boys were gone. Down to the lake they sprinted, in the clattering, tumbling, mountain goat gallops characteristic of their age and gender. Then, seconds later, they were back up to the picnic table for lunch.
Tents went up. Swimsuits went on, beach was invaded. Then back to camp, into canoes and off for a paddle around the sheltered bay. No fish were caught, so we returned to the beach. Fading into the background with a watchful eye, I grew dizzy at the pace of their perpetual motion. With the focus and efficiency of maturity I could out-paddle them any day, but they had infinitely more energy and skill for play. 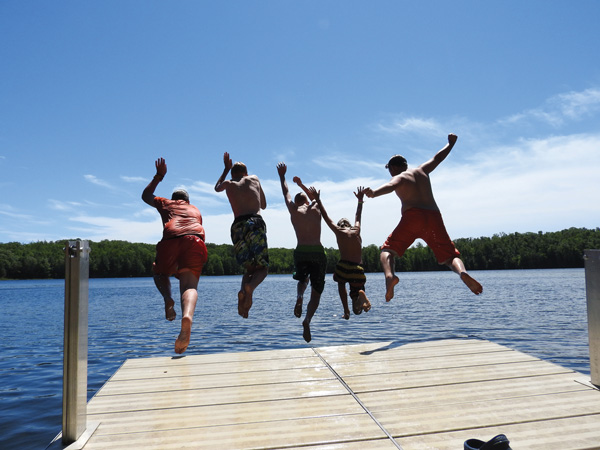 High water on the Namekagon did not get in the way of these boys having fun. Photo by Emily Stone.

If this is their preferred, default speed, it’s no wonder that these boys struggle to sit in class and pay attention or to settle down to do math homework. It’s no wonder that shorter and fewer recesses are impacting students’ ability to focus. I always hope that the boys learn something from me on these trips—how to pack a Duluth pack, steer a canoe, set up your tent to keep the rain out, keep a clean camp, tie a trucker’s hitch, or identify poison ivy. But really, even if all the boys learn is that joy can be found in the freedom of nature, I’m satisfied.
Our second day on the trip—their one full day outdoors—was another whirlwind. A rope swing beckoned us halfway down the lake, but rolling whitecaps and seething gusts turned us back. The failed adventure was forgotten as fast as you could say “sunfish.” Even the staunch anti-fisherman unwound line from a tree, tied on a night crawler found drowning in a puddle, and spent an hour or so on the dock watching schools of nibblers rise to the bait. Our serious anglers trolled circles around the protected bay and each came up with at least one large bass, plus 40 tiny bluegills.
We had a few moments of peace during lunch. Nine mouths full of peanut butter afforded some welcome silence. Then back to the beach. After an hour of intense activity, I noticed a few boys start to slow down. Nabbing the chance, I gathered everyone up on the beach for a geology lesson. 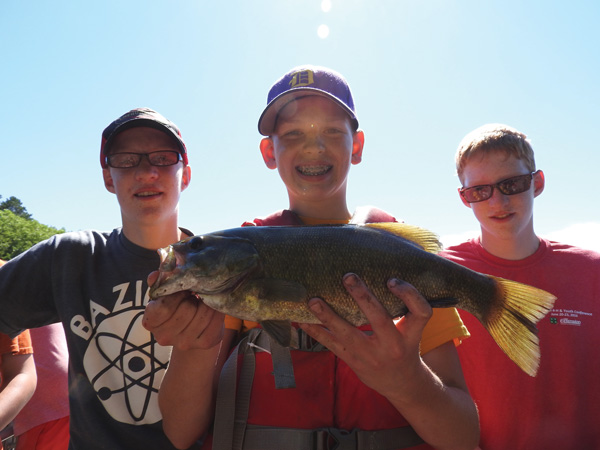 “One-point-one billion years ago,” I began, “the continent tried to rip itself apart, right down the basin of Lake Superior.” The story of the mid-continent rift is one of my favorites. The thinning crust allowed magma to well up, and the resulting lava flows created the North Shore of Lake Superior. The intense tectonic activity was felt all the way down here, in the form of accessory faults that deeply cracked the bedrock. The long, narrow basin of Lake Owen was carved out of one of those faults. Fast forward to 10,000 years ago, and sub-glacial rivers carrying torrents of meltwater deposited sinuous ridges of gravel called eskers up and down the lake.
I know that geologic time probably means little to the brain of a teenage boy. Everything is now. The potential consequences of their actions have no significance until they materialize. Only I foresaw the potential for broken bones, for glass in bare feet, for sand in eyes, for fishhooks in faces. Those things never happened, so I’m sure the boys never considered their possibility. The sad part is that the consequences of our actions—of years of inaction on climate change with a similar attitude—have now materialized in their lives.
Through sheer luck this storm didn’t threaten their lives. But it could have. This much rain is unprecedented. The river hasn’t flooded like this in recorded history. Still, their luck and their resilience in the face of potential catastrophe and actual plan changes gives me hope that they will manage with the future—which is now the present–we’ve created for them.