Videotaping a crime is not a crime 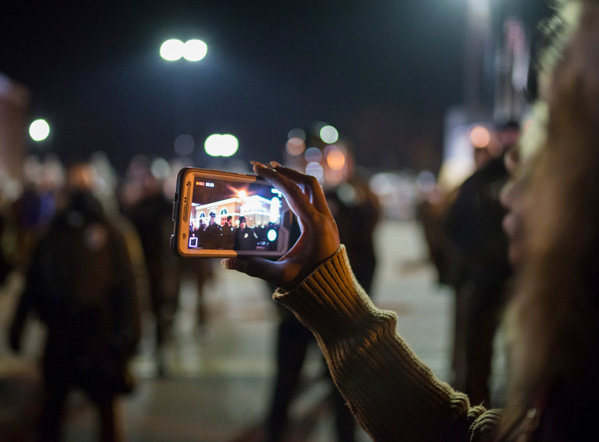 Protests against police brutality have rocked the country in the aftermath of the police killings of two African-American men, Alton Sterling in Louisiana and Philando Castile in Minnesota. Videos of their deaths were shared on the internet, horrifying millions around the globe. Yet increasingly, people who record police violence are themselves being targeted, harassed, arrested and even imprisoned.

On July 5, 2016, Alton Sterling was selling CDs in front of his friend’s convenience store in Baton Rouge, Louisiana, when he was tackled by police and shot to death. Abdullah Muflahi, the store owner, recorded the shooting on his phone. He described the scene on the Democracy Now! news hour:

“I started recording ... the whole time, he was asking them, ‘What did I do wrong? What’s going on? I didn’t do nothing wrong.’” Muflahi continued, “By the time I got out of the store, they were already slamming him on top of a car and were tasering him. That’s when another officer ran and tackled him onto an SUV, then both cops slammed him on the floor.” Alton Sterling was on his back, on the pavement, with two large, white Baton Rouge police officers pinning him down. The officers shot Alton Sterling at point-blank range, killing him.

Muflahi continued: “After the shooting, one of the officers that was there, I’m not sure what he said, but the other officer that was close to me had said, ‘Just f-- him. Just let him lay there,” talking about Mr. Sterling. That’s when they grabbed me and put me in the back of a cop car.” Muflahi was held for six hours, his phone was confiscated, and the police, without showing a warrant, confiscated the store’s security surveillance video, along with the recording equipment itself. Abdullah Muflahi is suing the police.

A couple in a nearby car also video recorded the encounter. Chris LeDay, an Air Force veteran from Baton Rouge now living in Atlanta, got hold of the video. He is a musician who has built a significant social-media following. “When I got the video, the main thing I wanted to do was just put it out there, because it was a cold-blooded case of murder, clear-cut,” LeDay told us on Democracy Now! “I wanted to put that on display for everyone to see, so these cops could stop getting away with this type of ordeal.”

The video did go viral, and soon after, Chris LeDay was arrested. He works at a U.S. Air Force Reserve facility in Dunwoody, Georgia. As he was entering the base, he was detained. When he asked what he was being arrested for, they said he “fit the profile.” When he asked what profile, they wouldn’t say. This 6-foot-3-inch, 270-pound African-American Air Force veteran was scared. He told us on Democracy Now!:

“After about 30 minutes passed, I see all these extra cops coming up. There’s more and more cops showing up. So I decided to take action into my own hands, and I put it on Facebook. I tagged my mother and my father, and I let them know. I said, ‘Hey, you know, I’m surrounded by cops right now, both city and military. I’m not really sure what’s going on. But I want to let you guys know that if anything happens, I’m not resisting.”

Chris LeDay was handcuffed, then shackled, put in an orange jumpsuit and held for 26 hours. The charge? Unpaid past traffic fines.

This week marks the second anniversary of the police killing of Eric Garner in Staten Island, New York. On July 17, 2014, after a police officer put him in a chokehold and others piled on top of him, Eric Garner managed to say “I can’t breathe” 11 times before he died. We know all this only because a bystander, Ramsey Orta, recorded the entire attack on his cellphone. The video went viral. None of the NYPD officers involved has been charged with his death.

Ramsey Orta told us that police targeted and harassed him immediately after his video went public. During one of his arrests, he said they told him, “You filmed us, now we’re filming you.” Ramsey Orta has just agreed to a plea deal that will send him to prison for four years on unrelated charges – making him the only person at the scene of Garner’s killing who will serve jail time.

Videotaping a crime is not a crime. It’s a public service. Police harassment of citizens who provide video evidence of police brutality has to stop.