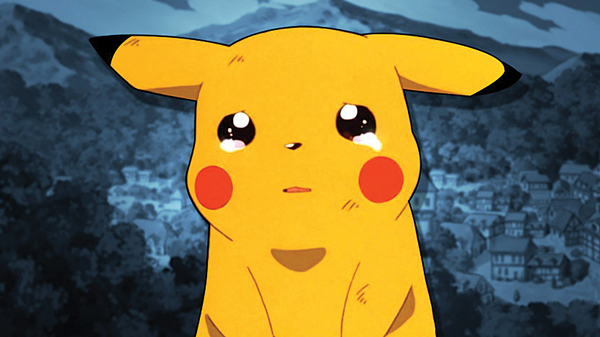 Charmander lights a cigarette with his tail and paces again to the window, checking the gate for visitors. He will repeat this routine every three to four minutes. Charmander is tense, irritable and quick to anger, yet overcome with exhaustion. This well-known Pokemon is fighting a losing battle with sleep, but right now it’s a luxury he simply can’t afford. He pops two more Adderall and paces back to the window again.
These are dangerous times for pocket monsters. Pokemon have always been hunted - the challenge was once a welcomed part of their daily lives - but with last week’s release of Pokemon Go for Android and iPhone, millions of brand new fans have access to unprecedented technology to hunt his kind relentlessly.
“It used to be fun,” said Charmander, clutching a crumpled cigarette pack in his hand like a stress ball. “When I wanted to fight, I left the house and found all the trouble I wanted. But the technology has advanced, man. These sons of bitches can track me now. They’re mobile. You ever seen the movie ‘Running Man’? It never stops, day or night. You don’t go looking for people anymore. Now people find you.”
A noise outside stirs Charmander into a frenzy. He dashes to the window to check the gate again.
“Who knows you’re here?!” shouted Charmander, the flame on his tail growing intensely. “Empty your pockets! Do you have Poke Balls, motherfucker?! I don’t care if I already checked, empty them again! I told you no goddamn Poke Balls! You promised not to catch me, you lying piece of shit!”
The noise, it turns out, was a stray cat knocking over the lid of a garbage can. Charmander apologizes for his outburst, stating that he’s been under a lot of pressure lately. He’s been fighting a war that’s become more of a massacre. Most of his friends are captured or dead, their very lives traded for a few small pieces of candy that allows those with questionable ethics to frankenstein parts of his DNA into other Pokemon. He sees this forced evolution as a defiance of God and nature.
The Nazis performed similar experiments on their prisoners in the 1940s. The parallels are shockingly identical. Like Hitler, users of Pokemon Go believe the races they’re capturing are inferior and unimportant beings, like random Non-Playable Characters (NPCs) in a video game. They realize they don’t need to “catch ‘em all”, but continue to do so for their own sadistic enjoyment. But at least Charmander is still free, unlike his friends.
“It’s like a sick, worldwide dog fighting ring,” said Pikachu, interviewed from inside the Poke Ball used to capture him. His normally adorable yellow tail is now frazzled and tattered. “Fight and train, all day long, no breaks until the battery on their iSlavery devices burn out. They pump me full of that vile steroid candy and work me until I drop. We’re not even pets to them. We don’t even get that basic level of condescending respect and forced servitude.”
Niantic Inc, the Joseph Goebbels of the Pokemon world, have been pushing their Pokeaganda at a breakneck pace, to the point where their online servers have been unable to handle the sheer volume of bigots interested in enslaving and torturing Pokemon. The popular mantra “Gotta catch ‘em all” has become a chilling battle cry in the uneducated public’s relentless push for global ethnic cleansing.
“I don’t know why the hell they hate us so much,” said Squirtle, a turtle-like Pokemon whose name is not intended to be a sexual joke. “Niantic’s entire business plan is literally just to be dicks to us. Every year they come out with new tools for oppressing us, and a new sadistic professor to experiment on our species.”
Professor Willow, the Josef Mengele of Pokemon Go, is the head of the Kenjo Region Pokemon testing lab. He’s the latest in a long line of scientists who perform experiments on Pokemon with absolutely no regard for their health or safety. Many believe Willow is a deranged sociopath because of his tendency to hide his sadistic, bigoted behavior while visiting his captives.
“He’s capable of being so kind to the Pokemon,” said a former Kenjo lab assistant, “to have them become fond of him, to bring them sugar, to think of small details in their daily lives, and to do things we genuinely admire. Then a few hours later, he mutilates and transforms them into vicious fighting machines. The man has no soul.”
The previous head Pokemon scientist, Professor Kukui of the Aloha Region lab, fled to South America after global awareness of his equally brutal atrocities arose. After a year of failed extradition requests by various Pokenazi hunters and the Israeli intelligence agency, Kukui drowned while swimming off the Brazilian coast and was buried under a false name. This left many Pokemon without a sense of closure.
The remaining free Pokemon like Charmander continue struggling to survive, desperately waiting for humans of the world to educate themselves about the persecution of their kind. Yet every few minutes brings another ignorant and terrifying threat that cannot be avoided.
“Damn it, there’s that asshole kid from Cloquet again,” said Charmander, watching the latest intruder enter the front yard, holding his phone two inches from his face the entire time. “Good thing he has a crappy old Motorola Droid phone that freezes up on him all the time. That kid couldn’t catch his own dick if it was glued to his hand. I’ll be back in a minute.”