The Nature of Gardening 2 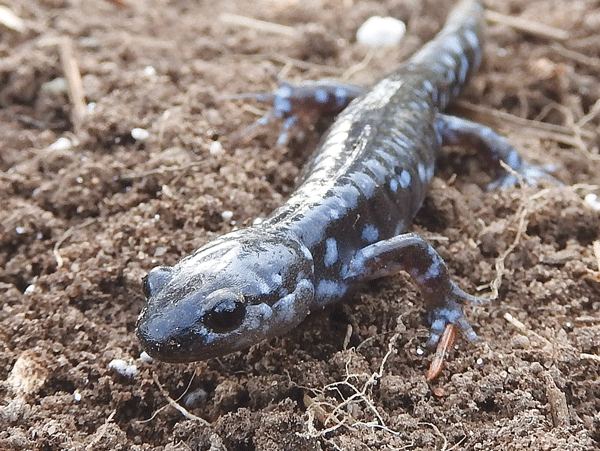 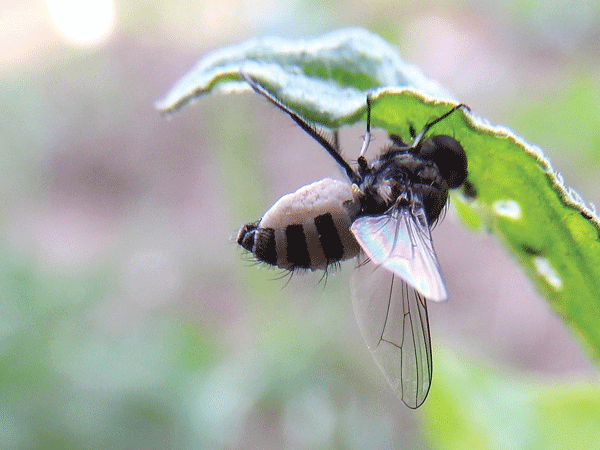 This fly may look ok, but it has been parasitized by a fungus. White spores fill and distend its black abdomen, creating stripes. Still, the dead fly waits in the mating position, ready to infect another amorous fly with the fungus. As a root-maggot fly whose larvae eat my garden plants, I’m not sad to see it go. Photo by Emily Stone.

Gardens are all about the food chain. Hoe in hand, evening light descending, I daydreamed about crisp lettuce, spicy peppers, sweet peas, juicy tomatoes, and endless green beans. It’s inescapable, though—my garden’s food chain also includes worms, flies, beetles, caterpillars, toads and mosquitoes. Don’t worry; I’m not eating all those things. Nonetheless, they are eating and being eaten in my garden.
Early spring weeding sessions turned up lots of long, sinuous, quack grass roots, and plenty of giant, glistening night crawlers, too. Even though earthworms aren’t native in the forests around here (the glaciers froze them out), they are welcome in my garden. Not only do they mix the soil and turn waste into nutrients, they provide food for the multitudes. One such beneficiary turned up in a trowel full of soil. A smattering of pale blue dots adorned the salamander’s glistening, blue-black skin like stars in the Milky Way. Worms are a favorite food. These burrowing salamanders prefer moist soil and swampy woodlands, and use leaf litter, rocks, and logs for shelter. Last year I found one hiding under my cardboard mulch.
Two weeks ago I moved another piece of cardboard mulch and discovered a tiny red-bellied snake. With a lightly-patterned, brown back, and smooth, red-orange underside, this pencil-sized snake was adorable. To further endear them to even the most squeamish gardeners, the red-bellied snake’s teeth are too tiny to matter to a human finger, and they feed nearly exclusively on slugs, with a few earthworms thrown in. They are welcome in my garden!
Last week I discovered a slightly less adorable snake after going to investigate a rustling in the weeds. Black and yellow racing stripes peeked through the green. I’ve heard that snakes with stripes tend to slither away quickly from danger, letting the pattern play tricks on your eyes. In contrast, snakes with cryptic patterns freeze and take advantage of their camouflage to disappear without going anywhere.
This garter snake wasn’t going anywhere fast, though. His Cheshire Cat grin was clamped tightly around the back left leg of a barely-wiggling toad. I marveled at his ambition. Toads and other amphibians are common prey for garter snakes, but still, this was a big toad, and the back leg seemed like a terribly awkward place to begin. Luckily, snakes are well prepared to swallow big meals in one gulp.
A snake’s lower jaw can pop out of its socket in the skull and then split in half and separate at an elasticated joint. Rear pointing fangs help the prey move in the right direction (which, according to the snake, is down its throat). The split jaw comes in handy with swallowing, too. The snake will work one side and then the other forward along the prey’s body, essentially walking its dinner down the hatch.
Once the snake can close its mouth, muscle waves called peristalsis move the prey through its digestive tract. The diameter of a snake’s body does limit the size of prey it can consume, but I’m not sure anyone let this garter snake in on the secret! After snapping a few photos, I backed off to let the snake do some problem solving.
Back in the potato patch with my hoe, a small fly caught my eye. Head down, abdomen up, it had assumed the mating position. No amorous partner hovered nearby, though.  I bent closer to examine the black and white stripes on its abdomen. It didn’t move. I poked it. Still no movement. Then, looking closer, I saw that the white stripes were actually caused by something pale inside, distending and stretching apart segments of the dark abdomen.
I’m glad no one was around to witness my exclamation of glee at this discovery. This fly had been parasitized by a fungus! Gross yes, but incredible, too. Many types of fungi attack all sorts of insects. The results are like a car wreck: gruesome, but captivating. Almost always the fungus triggers some behavior in the insect that facilitates spread of the fungal spores. In this case, being locked in the mating position on the tip of a leaf might attract another fly. Then, during the attempted copulation, the abdomen full of spores would pop and infect the newcomer.
It is a death I wouldn’t wish on my worst enemy. Still, the food chain endures in a space beyond our sense of ethics. Fungal parasites are important controls on insect parasites. A little research revealed that my statuesque fly was probably an adult root-maggot whose larvae have been eating my onions, turnips, beans, or cabbage. The fungus was doing my dirty work.
Speaking of dirty, every sliver of my exposed skin was now covered with smudges of soil from attempts to wipe away the burning bites of no-see-ums. Damp evening air had given flight to these barely visible midges who pack an outsized bite. They can’t fly when it’s hot and dry, their tiny bodies will dehydrate. A protein in their saliva triggers the extreme discomfort. Three. More. Feet. I convinced myself to keep hoeing as the skin on my neck, wrists, ears, and forehead burned from their blood-seeking bites. At the end of the row I grabbed a small bag of kale I’d picked for dinner and escaped to the car.
Tending a garden is an excellent reminder that there is no such thing as a free lunch, especially when you’re just one more link in the food chain.