How Tangerines Helped Deflect a Tent Full of Winey Poets 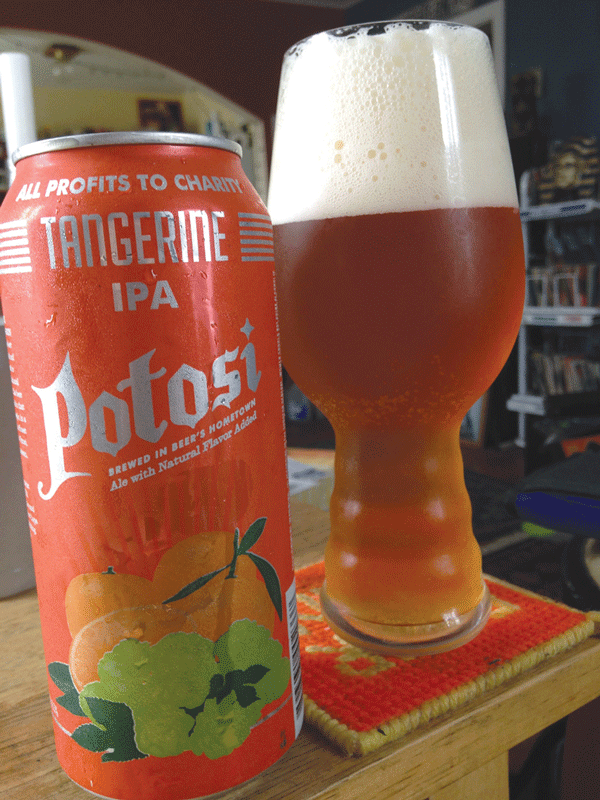 At a recent beer brunch to kick off an afternoon beer festival, my brain was shanghaied by an incredible imperial stout brewed with Mexican spices, which I will get to in another column.
But it was because of that amazing beer that I sort of glossed over the opener in the barrage of brunch beers, which was Tangerine IPA from the Potosi Brewery of Potosi, Wis. I remember enjoying the taste, but nothing more than that, which is why I vowed to return to it with a fresh perspective.
Growing up in Duluth in the 1960s, tangerines were still an exotic fruit that you’d usually only see at Christmas. Every time my siblings and I would get a tangerine in our Christmas stockings, I wondered what sort of grow operation Santa had to produce one of these intense little fruits for every kid in the world. Yes, I guess I was a bit naïve.
This is a lovely looking IPA, pouring out a not-quite-transluscent dark tangerine, with an impressively thick, tight-bubbled white head. In other words, it looks very inviting.
I expect a citrusy aroma but get only what I think is malt and honey. Lots of things are floating in a heavy breeze today, so maybe my sniffer isn’t working properly.
But my tastebuds are just fine. The taste is sweet malty, bright and, finally, sharply tangy, as a tangerine can be, but with an added hop bite. Fresh tangerine juice is added to this 6.5 percent Imperial pale ale, so the label tells us.
I dig it. The label also tells us “all profits to charity,” so, there you go.
Because a wine festival is going on outside my window right now, with many touristas in my village (including a tent full of poets reading their stuff directly outside my window; I have Deep Purple’s Fireball turned up to 11 in order to drown them out – next up is Led Zeppelin III, side 2, which includes the beautiful “Tangerine”, perhaps followed by both sides of Fleetwood Mac’s Then Play On), I am temporarily unable to hook up with the internet, so if you’re interested in learning more about this charitable Tangerine IPA, check out the Potosi Brewery website.
Did I mention I hate poetry? Or maybe it’s just winey poets I hate. I think it’s the way so many of them declaim in the same pedantic monotone, as if each of them were as weighty as T.S. Eliot reciting his monumental “The Love Song of J. Alfred Prufrock.”

“I grow old, I grow old,
I shall wear the bottoms of my trousers rolled.

Do I dare to eat a peach?

Shall I part my hair behind?”

Or my favorite line:

“I should have been a pair of ragged claws
Scuttling across the floors of silent seas.”