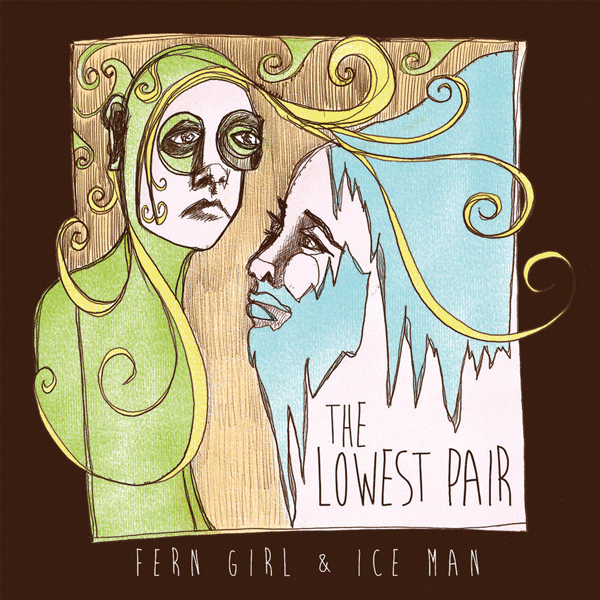 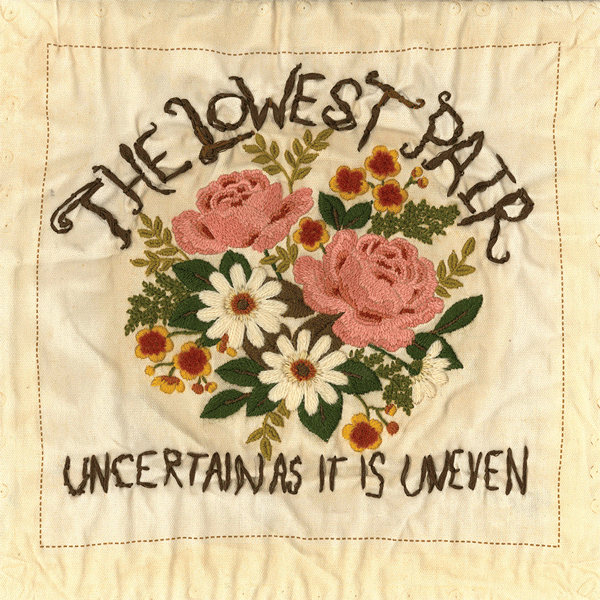 It was around a year ago when the folk/roots/alternative duo, The Lowest Pair, released their powerful and beautiful album, “The Sacred Heart Sessions.” The natural reverb of the room captured their sound perfectly and with a lot of music coming out in that particular genre, after a couple of listens, I was sold on it being one of the best albums I’ve ever heard for that category of music. The dynamics between Kendl Winter and Palmer T. Lee ranged from pretty, to deep, to heart wrenching. That album is a must listen to anyone who appreciates music in my book.
Of course I was excited to hear that The Lowest Pair had put out not one, but two albums recently. They are titled “Fern Girl & Ice Man” and “Uncertain As It Is Uneven.” I found this odd to release two albums at the same time. Most would either just put out a double album, or perhaps hang on to one of them for six months to a year before releasing the other. I try to stay away from reading other reviews until I decide what I think about an album, or in this case albums. I considered taking each on their own, but to me, most of the songs are interchangeable from one album to the other with some very subtle differences. I had to listen to both numerous times to even start to understand why they might have even made such a move.
I think if I were to choose a favorite between the albums, I lean towards “Fern Girl & Ice Man.” Both albums have a characteristic truthfulness in the lyrics and solid song structures and instrumentation, but “Fern Girl” is ever so slightly better constructed and delivered.
The first song that really caught me on “Fern Girl” is the third track, “Stranger.” Overall, the group hits hard with their lyrics in most songs. Yes, this is primarily guitar and banjo duo, but the sentimental feeling harmonica is a nice touch. The refrain, “I carry on with strangers/I’m forever growing stranger,” sets a lonely tone to the song, and there is a certain amount of intricacy among the instruments, although not exactly a complex song in overall structure.
Perhaps the most upbeat and “hard driving” song is “When They Dance The Mountains Shake.” It should be noted that both of these albums are exceedingly mellow as is pretty much everything the group does. The fiddle solo and handclaps set the song apart because most of the songs are quite minimalist.
One song that hit me lyrically was the song “Totes.” “We shall not be bound for we know what happens to binders/How they get stuffed into plastic totes/slid under a bed/and we both know to end up there/you knowwe’d rather be dead…We are not our exes/we are not our expectations/we are not meant to be bodies between negotiations.” Some meaningful words are in the song for sure and I’m totes serious.
The album takes a little bit of a fun twist, kind of, with the song “Shuck it.” Well, the twist on words is fun, but there’s a lot of soul searching and realistic thoughts of how people sit socially and in relationships, as well as with nature along with a more spiritual outlook. There is a certain stoic seriousness to a lot of the group’s material, although there are small shimmers of humor here and there.
The next album “Uncertain As It Is Uneven” is as I said very similar except it’s a little more toned down. I say “a little more” because the material is almost totally toned down. The first track I really liked on the album is the second track titled, “Keweenaw Flower.” Anyone from that area may enjoy this song. The chorus is very catchy, “The fanciest flower I’ve ever seen, the fairest I have ever saw, is on the South Shore of the Gitche Gumee up on the Keweenaw.” It’s a great tune with plenty of local references.
I like the simple banjo of the song which starts “Dreaming of Babylon” and then gives way to showing some very tasteful flair as it runs the fret board and goes into a mix of experimental, contemporary and some traditional sound that are hard to explain. All the while is stays quite mellow and refined, but it drops from being typical roots and folk music.
To not go on and on, The Lowest Pair is not typical roots and folk music and I’m pretty sure that’s why they stand out to me and I like them so much. I have to be honest in saying that I think The Sacred Heart Sessions nailed their overall sound a little better, but there are plenty of great songs on these two albums. I almost wish they would have just combined the best songs from both and released them on one album and then perhaps released an album with more in depth instrumentation from themselves and guest musicians, and perhaps took the glimpses of experimentation a little farther. The guest musicians that are on the albums include some familiar names: Engineer and Producer Erik Koskinen takes on bass, drums, and lap steel; Dave Simonette plays some guitar on certain tracks; also, Barbara Jean Meyers handles some fiddle on both albums. Despite this notable lineup, things felt pretty low key overall. While the duo has dialed down their sound, the only thing I wonder is what they might start doing different or if they even need to do anything different, although listening to two minimal guitar and banjo albums over and over again makes me wish they would. Nonetheless, The Lowest Pair deserves a listen.