Falling into a Black Hole of Flavor 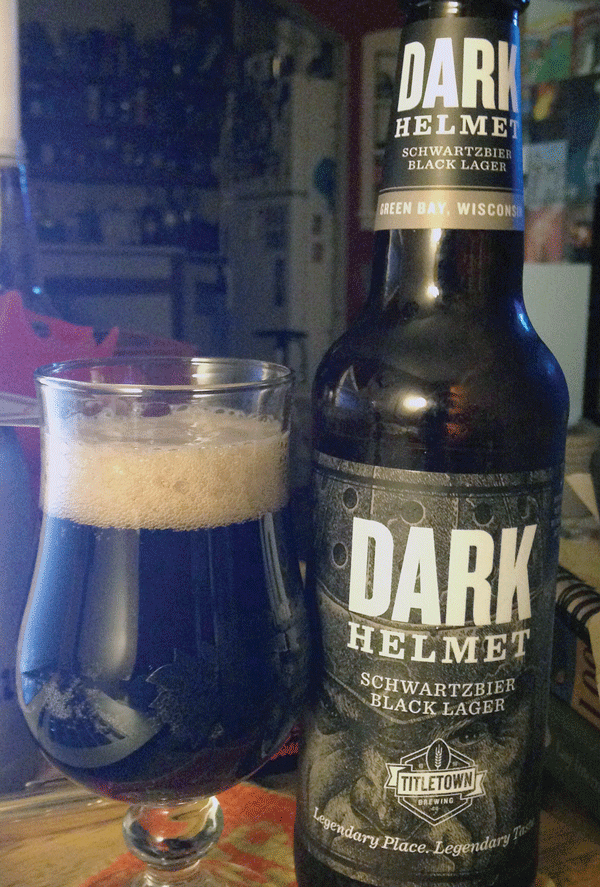 There is something deliciously decadent about a Schwarztbier. The roasted malts that make black lager add a lovely depth and complexity that is easy to lose yourself in.

Coffee, chocolate, caramel, tobacco and char are the dark flavors that seduce my palate in flavorful waves while drinking the Bible black Dark Helmet from Titletown Brewing of Green Bay.

It turns out Dark Helmet is a popular name for German-style black lagers because there are at least two others out there – both Westbrook Brewing of Mt. Pleasant, S.C. (which is very near Mayberry RFD) and the Brew Kettle Taproom and Smokehouse in Strongsville, Ohio, have Dark Helmet black lagers, although the Ohio version is an imperial Schwartzbier (8 percent). The labels on both of those versions reference the Dark Helmet of Mel Brooks’ Star Wars spoof Spaceballs, and the Brew Kettle version includes the tagline “May the Schwartz Be With You.”

As required by law in Green Bay, Titletown’s label references football rather than film. At least I think that is an old school football player on the label of their Dark Helmet.

Even though Dark Helmet just entered Titletown’s bottle offerings this spring, it has been around longer than that at the brewery. In 2009 it earned a Bronze medal at the Great American Beer Festival. The Iron Hill Brewery in Wilmington, Del., and the Chuckanut Brewery of Bellingham, Wash., took gold and silver, respectively; I would really like to try those to see how they could possibly be any better than the Titletown version because each sip of Titletown’s Dark Helmet takes me deep into a black hole. Each time I climb out, pleasantly exhausted by the experience but eager to dive back in.

All of a sudden I have an intense craving for Mettwurst, sauerkraut, whole grain mustard and pumpernickel.

Welcome to the Schwartz side!