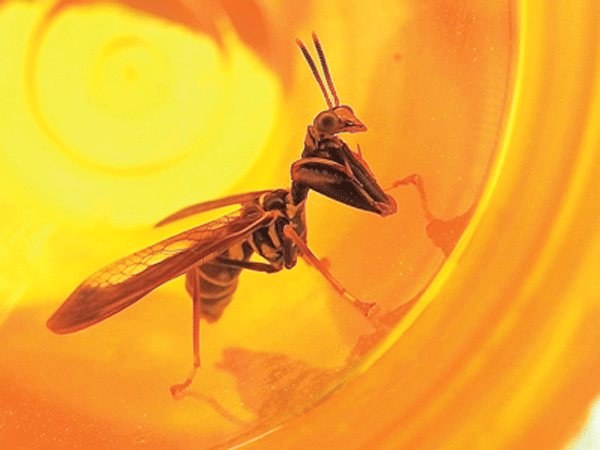 The wasp mantidfly (Climaciella brunnea) shares the hunting weapons of a praying mantis and the warning coloration of a wasp. These fascinating creatures are harmless to humans, even when trapped in a pill bottle. Photo by Emily Stone.

High on a swooping, prairie-covered hill on the Sylvan Runkel State Preserve in far western Iowa, I knelt down among the prickly thatch of last year’s grass for a closer look at the plants. With one ear tuned to the botanist leading the hike, I examined new green life pushing up through the old. A splash of color on the gray-green foliage distracted me further. The black and yellow insect soon had my full attention. In an instant I was grateful that I hadn’t remembered to give back the bug bottle from the morning bug hike. I scooped up my discovery and capped it securely, tucking the treasure away in my backpack next to binoculars and a granola bar.
“Oh, honey!” exclaimed the entomologist much later, as I opened the golden-hued pill bottle in the high school cafeteria before the evening program of the Loess Hills Prairie Seminar. From my experience with her earlier in the day—hunting bugs on the native prairie in the Sylvan Runkel State Preserve in far western Iowa—I knew that this particular exclamation was a good sign.
MJ Hatfield, the entomologist, is a retired UPS driver who discovered insects by way of native plants. She brings the pure joy of a dedicated amateur to the pursuit of bug catching. This particular insect inspired her exclamations in part because of its chimeric appearance, but also due to its fascinating life habits, and the fact that she doesn’t see its kind very often.
The creature that stared back at us (or not, it’s hard to tell where they’re looking) was an insect mutt. Large front legs—reminiscent of a praying mantis—remained tucked up under a pointed chin and two giant eyes. The rest of the body, however, sported flashy black and yellow stripes like a paper wasp. Flipping through a big reference book on the silent auction table, MJ soon found its photo. “Climaciella brunnea is the most commonly encountered mantisfly in the northeast and across the continent,” read the caption.
Mantidflies are neither praying mantises nor flies. They belong in their own family, Mantispidae, and have quite the life story.
The large, spiny, praying mantis-like front legs of mantidflies are used to catch small insect prey when they land on a flower where the predator waits.
As adults, mantidflies mimic the flashy “danger here!” colors of paper wasps. The bright stripes warn birds that wasps are a hazardous snack. Using a technique we call “Batesian mimicry,” mantidflies, a harmless species, impersonate the warning signals of paper wasps to escape hungry birds who would try to eat them both. When threatened, a mantidfly may assume the curled-abdomen position of a stinging wasp or wave its abdomen in the air to advertise the warning colors.
Across its wide range, from British Columbia to Quebec, and south to Costa Rica, Climaciella brunnea adapts itself to mimic the various local species of stinging wasps. In another smart move, the mantidfly adults time their abundance for spring and early summer, when most of the birds out foraging are adults who’ve already learned to avoid wasps. You see, newly fledged birds need a learning period in which to discover the wisdom in avoiding black and yellow insects. Without that negative feedback, the mantidflies’ trickery won’t work. Therefore, mantidflies move on to another stage in their lifecycle before the midsummer fledging rush.
Female mantidflies lay clusters of 1,000 eggs on leaves or other surfaces. The eggs hatch in 11 to 30 days. The dangerous mission of the tiny larvae (should they choose to accept it) is to attach to a wolf spider and sneak into its egg sack. Similar to questing wood ticks, the larvae wave their tiny legs in the air until they sense a wolf spider and then leap onto the base of its abdomen.
Mantidflies need to end up on a female spider, but they aren’t choosy in this first phase. They ride around on their host—snacking on a little hemolymph (spider blood) for energy—until the spider finds a mate and begins copulation. At this point the larva will make sure it is on the female spider. The transfer needs to be swift, since female wolf spiders often cannibalize the males after copulation. It’s not wise to get caught in the middle of such a marital dispute!
Then, as Mama Wolf squirts out her eggs, and before she spins the tough silk sack around them, the larva wiggles in. Once inside the snug, well-provisioned hideaway, the mantidfly larva pierces the eggs and sucks them dry. After a while it pupates in the safety of the egg sack and emerges as an adult.
“Oh, honey!” MJ exclaimed again with another peek at our discovery. The day had proceeded from a splash of color on a leaf to a journey of learning and amazement. After all that, I think we may also have emerged—as friends. 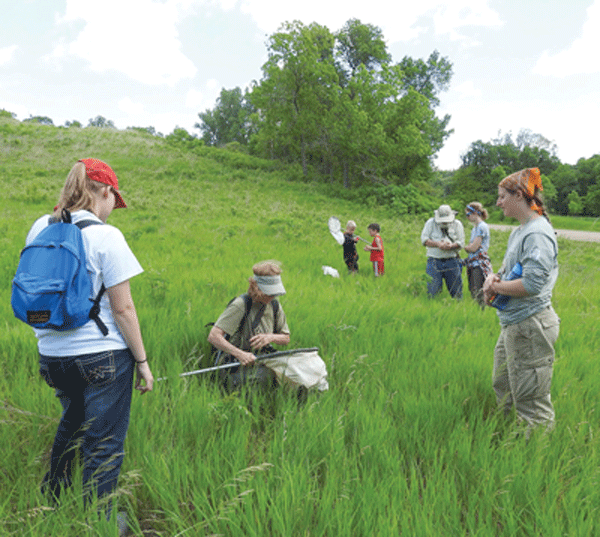