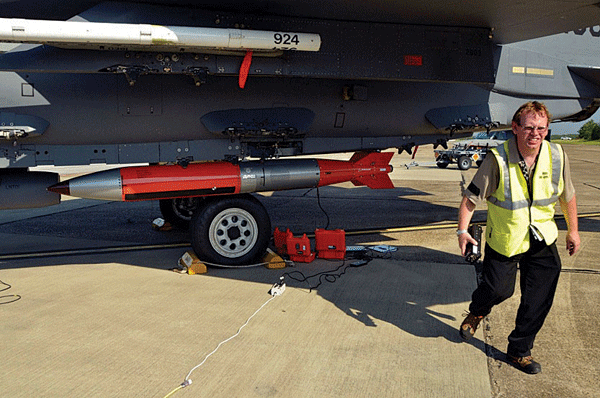 Spread across six NATO bases in Europe, some say that US Air Force’s B61 hydrogen bombs are vulnerable to terrorist plots. The Pentagon has decided to push ahead with development of a “B61-model 12” (above), the first-ever “guided” gravity H-bomb that may also be an earth-penetrating bunker buster.

“A little more than 60 miles from Brussels airport,” Kleine Brogel Air Base is one of six European sites where the United States still stores active nuclear weapons, reports William Arkin, a national security consultant NBC News Investigates. Those bombs “evade public attention” Arkin noted last March, “to the extent that a post-terror attack nuclear scare in Brussels, Belgium can occur without the bombs even being mentioned.”
At Kleine Brogel, there are an estimated 20 US B61 nuclear bombs to be carried and delivered by the Belgian Air Force’s F-16 fighter jets. Yet these weapons “did not come up in news coverage following the [March 22] Islamic State bombings in Brussels,” Arkin wrote for NewsVice. The B61s weren’t mentioned in news of the shooting death of a Belgian nuclear reactor guard, or in stories about lax security at Belgium’s power reactors, Arkin said.
Twenty-seven years after the end of the Cold War, only 180--  out of the thousands of nukes once deployed in Europe -- are still kept at the ready: in Belgium, Germany, Italy, The Netherlands, and Turkey. “And,” Arkin notes, “Soviet nuclear weapons have even been removed from Eastern Europe.”
If “nuclear weapons could be removed from the Korean Peninsula, certainly they don’t need to be physically present in Europe,” Arkin explains. “Other NATO nuclear partners have denuclearized. In 2001, the last nuclear weapons were withdrawn from Greece. US nuclear weapons were even withdrawn from Britain in 2008.”
Other reporters joined in flagging taboo terror scenarios. Hans Kristensen, the director of the nuclear information project of the Federation of American Scientists, warned last month, “Suspected terrorists have had their eye on one of the Italian bases, and the largest nuclear stockpile in Europe is in the middle of an armed civil uprising in Turkey [the 90 B61s at Incirlik] less than 70 miles from war-torn Syria. Is this really a safe place to store nuclear weapons?” The answer is No, especially considering that since 9/11 terrorists have hit Belgium three times, Germany and Italy once each, and Turkey at least 20 times -- all four are current B61 outposts.

Large majorities of Europeans, prominent NATO ministers and generals, and Belgian and German parliamentary resolutions have all demanded permanent removal of the remaining B61s. The holdup on denuclearization is not public opinion, security or deterrence, but big business.
Nuclear Watch New Mexico reports that the US National Nuclear Security Administration (NNSA) receives around $7 billion a year for maintaining and enhancing nuclear weapons. The Air Force wants 400-500 of the new B61-12s, and 180 of them are scheduled to replace existing versions known as the B61-3, -4, -7, -10, and -11 now in Europe. In 2015, the NNSA estimated the cost of replacing the B61s at $8.1 billion over 12 years. Budget increases are of course sought every year.
Nuclear weapons laboratories are on this gravy train, NWNM notes, specifically Sandia Nat. Lab in Albuquerque (a wholly owned subsidiary of Lockheed Martin) and Los Alamos Nat. Laboratories, which oversee the design, manufacture and testing of B61-12.
William Hartung, a Fellow at the Center for International Policy, reports that major weapons contractors like Bechtel and Boeing reap huge profits from weapons upgrades. Lockheed Martin “gets two bites at the apple,” Hartung says,  because it also designs and builds the F-35A fighter bomber, “which will be fitted to carry the B61-12, as will the F-15E (McDonnell Douglas), F-16 (General Dynamics), B-2A (Northrop Grumman), B-52H (Boeing), Tornado (Panavia Aircraft) and future long-range striker bombers.”
Although the United States has promised not to build new nuclear weapons, Kristensen, and Matthew McKinzie, the Nuclear Program Director at the Natural Resources Defense Council, report that, “The capability of the new B61-12 … seems to continue to expand, from a simple life-extension of an existing bomb, to the first US guided nuclear gravity bomb, to a nuclear earth-penetrator with increased accuracy.” All these complex “enhancements” to nuclear weapons systems cost enormous amounts of tax money. And the money keeps coming because it fuels and rewards the perceived power and prestige that nuclear weapons workers carry up to corporate, academic, military and political elites.

Summer-long protests underway at Büchel Air Base, home to 20 US H-bombs

The German group Nuclear-Free Büchel has launched its 19th annual series of actions against the 20 B61 bombs deployed at Büchel Air Force Base in West-central Germany. The rallying cry for this year’s 20-week-long event: “Büchel is Everywhere.” The occupation began March 26 -- the anniversary of the German government’s 2010 resolution calling for permanent removal of the B61s -- and continues through Nagasaki Day, Aug. 9. Just outside the main gate, over-sized banners, placards and art recall a successful campaign 30 years ago that ousted 96 nuclear-armed US Cruise missiles from Hunsrück, Germany: On Oct. 11, 1986, 200,000 people marched there against the NATO craziness of preparing to use nuclear warheads against a conventional Warsaw Pact invasion, i.e. destroy the village to save it.