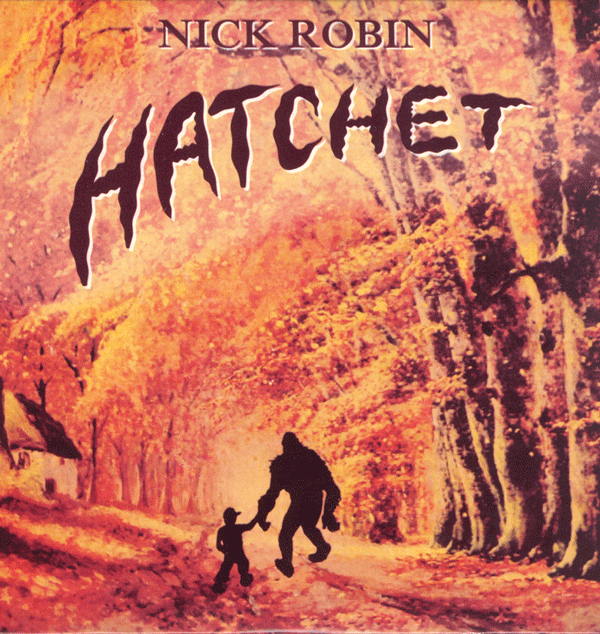 I can’t say I’ve heard of or seen Nick Robin play before receiving his new LP titled “Hatchet” in the mail a week or two ago. This is probably due to the fact he is based out of the Twin Cities, but upon glancing over the credits on the album, it left me scratching my head on how this artist was never on my radar. Familiar Duluth musicians such as Sean Elmquist, Matt Mobley and Jerree Small all contributed to this album and parts of it where recorded in Duluth at the Red Herring studio. The album itself appears to be promoted by the Duluth label Chaperone Records.
I’ll say that I don’t review every release I get from Minneapolis (although this is kind of from Duluth) unless if I think the material is especially well done. If I’m not really into an artist who might play once or twice a year in the Twin Ports, why would I expect others to be into them? I had really no idea what to expect from this album and I’ll have to say that I was pleasantly surprised.
So Robin is a singer-songwriter in a way, but kind of in the way local musician Toby Thomas Churchill is a singer-songwriter. The material and approach of this album is rather unconventional. It’s certainly a cut above a bland and mediocre folk album. There’s some songs that are fairly straight forward, but there are some songs that are a little off the wall on this album, and of course I like that.
The album opens with the laid back songs “Heavy Touch” and “Couples Water.” The songs flow with each other and kind of remind me of The Shins. The have an easy going indie-folk/rock sound to them. The songs are quite pretty and the production shines from the synths in Heavy Touch to the subtle percussion (including the sound of waves in the background) and backing vocals in Couples Water.
The first couple of songs are nice and fine, and I can’t put them down. The album starts taking some unexpected turns with the track, “Little Red Squirrel.” The song reminds me a little of Violent Femmes “Country Death Song” in how it is not the usual genre for the artist, it has an Americana feel but explores a little outside of being absolutely that, and how it also tells a certain tale. The tale is about presumably a man (it could also be about perhaps a weasel or a fox) who takes a wife and they steal a rooster to eat. It’s not long where they are running through the woods and swimming through rivers to get away from the hounds trailing them. Eventually they are caught and his wife is taken away and the male character is hanged. As he is left hanging, a red squirrel comes to the rescue and chews through the noose. The male character then takes the squirrel as his wife. The song is quite dramatic and a joy to listen to. It can be found on Youtube with a rather interesting Civil War reminiscent video.
The album keeps getting more interesting with the reggae/surf/rock song “Jughead.” The production and instrumentation make this song about surfing everyday a little over the top but it can’t be said that it’s boring. It is a little different especially considering the previous songs. I’m not exactly sure who is playing what on this album, but Matt Mobley is most certainly on bass in some of it. The guitars, organ parts, and back ground vocals all work well together in making for an unexpected track.
If things couldn’t get anymore different, then the track “Weirdo” comes into play. If someone were to lie to me and say this song was a cover of some lost David Bowie b-side, I might be on the verge of believing them. The thing I like about this album is that it achieves strange, timeless and memorable music. “Weirdo, she’s petting other people’s cats, sniffing other people’s hats, but it comes to nothing,” is just one rather unusual verse in the song. From the put on accent to the breakdowns of the track, it has that epic songwriting Bowie feel to it.
The album evens out a little towards the end with the tracks “Shakin’ on the Vine” and “Alive and Burning.” These alternative/rock/pop tracks are credited as Robin as the sole songwriter while the rest of the songs on the album are a collaboration between Robin and Elmquist. I’m not sure how this project came together or who did what, but it was probably a lot of fun to work on. This album has few dull moments.
The album ends with the track “Hatchet” which is a very quirky psychedelic rock song. The song is about a boy brought up in the wilderness without any friends or family who is named Hatchet. It is a little intense, but in a fun way.
From the first track to the last, with the first couple of listens I had to make sure that I was still listening to the same album. The unexpected blend of genres and subject matter on the album sets this album apart from a typical singer-songwriter project. The album goes from cool and seemingly meaningful alternative music to just eccentric and odd songs that for some reason are still down to earth enough to belong on this album and work out with each other. I’ll definitely be giving this album a listen every now and again and I’d really be interested to see Robin play live someday.