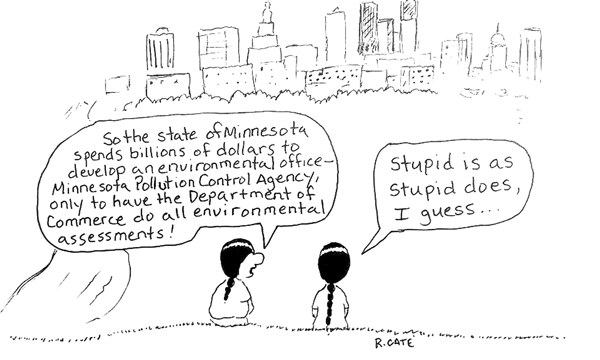 This past Friday, the US Environmental Protection Agency Region V sent strong recommendations to Minnesota on the scoping for the state environmental impact statement on the Sandpiper and Line Three.  The EPA called for much more stringent and exhaustive reviews that the state is anticipated to undertake. The Agency’s comments were in addition to hundreds of comments submitted by Minnesotans and Anishinaabeg regarding the process.
“While the state of Minnesota’s Department of Commerce is trying to reduce the scope of the EIS, the EPA strongly suggests expanding the scope of the review, “Don Wedll, Senior Policy Advisor for Honor the Earth explained. The EPA letter, from Ken Westlake (Chief NEPA Implementation Section) referred to climate change, tribal treaty rights, human health impacts and cumulative assessment of pipeline infrastructure as concerns of the agency.  Calling for the DOC to review the “ …the potentially high volume of greenhouse gas emissions associated with the proposed action the EPA recommends including a discussion of potential measures to reduce emissions”.   The Agency expressed concerns regarding the multitude of pipelines in the northern wild rice areas, asking for a review of the “cumulative effects on wild rice of pipelines, noting that a leak or spill that potentially effects wild rice, fish and harvesting would have a disproportionately high and adverse impact on the Native American populations.

Since Tribal governments and Indian reservations have a federal trust relationship with the federal government, the federal agencies have taken a significant interest in the state’s actions.  “The EPA recommends that the draft EIS consider potential impacts to tribal treaty resources such as tribal harvest of fish, wildlife, plants including wild rice within the ceded territories”. The EPA letter notes a recently completed study identifying potentially 180 archaeological and cultural sites along the proposed route, a number significantly higher than Enbridge, the project component had reported.
Under the heading, environmental justice concerns, EPA recommended the DEIS consider whether a pipelines leak or spills….would be disproportionally high and adverse to Native American populations. Any potential impacts to Native American populations should be evaluated in the context of subsistence gathering, nutrition, economics and cultural/spiritual practices.

In addition, the EPA took specific note of the documented sex trafficking and additional violence associated with pipelines and oil field,  and “ recommends considering the potential impacts for Native American populations from workers at pipeline construction worker camps ( e.g.: potential physical or sexual assaults, drug use, and increased burdens on essential services….)

“We are very pleased that the EPA has taken a strong position to protect the environment and the federal trust responsibility with Native people,’ Winona LaDuke said.