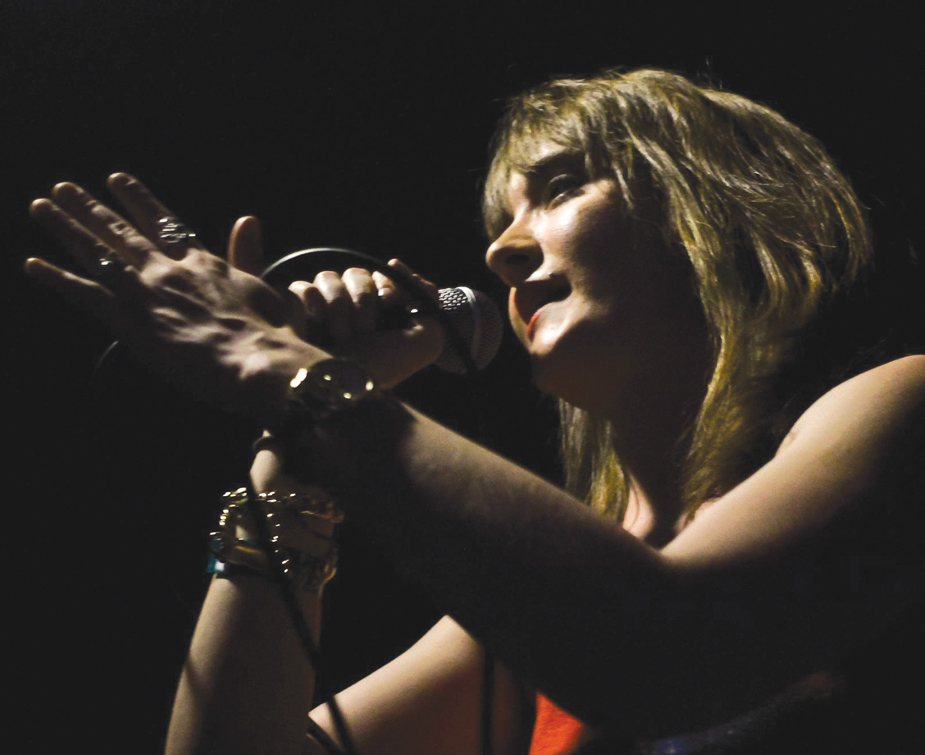 It’s pretty easy to say that everyone finds their own way into music at their own time. It’s not uncommon to see people who started playing some sort of instrument in their teenage years and play some shows here and there. There are definitely some people out there who didn’t start actively playing original music until well into adulthood. For the multi-instrumentalist/vocalist/hip-hop artist, Kat Fox (Katherine Hansberry), it could be said that her prior music training took her rapidly into a different direction from studying music at UW-Superior to becoming one of just a handful of female rap artists in the Northland.
We had the chance to talk with her about how things are going with her music and a little bit about her latest album, “Kat’Sup.” While the album does have tongue-in-cheek moments, it spans from fast spit out lyrics to some rhythm and blues. The lyrics are often inventive, and the meter of how they’re delivered shows are at times unexpected. In the period of a little more than a year, Kat has taken a full grasp on hip-hop and has made a part of it her own.

Kat: I’ve been really busy. I think I’ve played 15 shows in the last month or something ridiculous. I’ve been touring around a little bit. I went down to Mankato, LaCrosse, Minneapolis, Lake Nebagamon, and in April I went out to North Dakota.
Reader: How are things out there? Are they receptive?

Kat: Yeah, they have a really huge scene for some reason.

Reader: Tell me a little about your emergence in this hip-hop scene and the area.

Kat: I started doing hip-hop around here because I joined an Outkast cover band for Ides of March. I was Big Boi. I had a lot of fun and also got to meet some people who also do that. It went from there.

Reader: So it’s only been a couple of years.

Kat: A year, last March. So I’ve been really busy since then.

Reader: So were you doing any singing or rapping before then?

Kat: No, I’m a multi-instrumentalist. I play pretty much every instrument, but I’ve never done anything with voice before this. It’s like the final frontier of being a musician I think is doing voice stuff too.

Reader: After listening to the album, I can tell there’s some pretty technical rhyming schemes going on there, but also blues influences.

Kat: Yeah, I was a percussion major when I was in college at UWS. I liked going to school and learning about music, but I didn’t so much like the rigmarole and bureaucracy. Also, how my class mates didn’t really do anything involving music. They’re going to school for music and it’s more of an academic thing than actually using a practical application of it. Then I wondered, why am I doing this when I could actually be making music. Why do I need to be $20,000 in debt? I should just go make music and see what comes of it.

Reader: I’ve definitely seen people who are pretty accomplished but if you were to ask them to play an open mic with their main instrument, they’d just shrug it off and say they can’t do it. It’s a little amazing to see that. Either way, you’ve released this album and it sounds like you’re getting rid of them alright. There’s been some interest in the places you’re going?

Kat: I’ve just been taking every opportunity that’s been given to me at shows and traveling. I released it April 2nd and I think I’ve sold a little under 400.

Reader: I was listening to it and one thing that I noticed gets dropped a few times is confidence. I’ve noticed that before this album got put out, you’ve been playing once or twice a week on a regular basis. Tell me about that.

Kat: It started with just free-styling and being brave enough in a living room setting to just try to see what you can come up with off the top of your head. That expanded to getting on stage and free-styling, and battle raps outside of bars. I love doing that. But, that’s why I really like hip-hop because it’s really an individual and independent pursuit. You can do without anyone around you and it’s super autonomous where all you need is yourself and your vocabulary. It’s to not have to rely on a lot of people to make it happen.

Reader: Describe to me a little about who the album came together. I noticed that there aren’t any guys, but there are guest vocals on the album. Anyone you’d like to name drop?

Kat: Aurora Baer is on there and Killy Kay.

Reader: The last song (Kat Kalling) deals with feminist views. The last time I checked there’s not a whole ton of female rap artists in the area. There are a lot of singers and vocalists, but this is a little different. How does that work for you being one of the few in this genre up here?
Kat: It’s like a double edged sword. There’s positive things that come with it. There’s such a huge market for women who are doing this because there’s not many of us. But there has also been some really ugly situations that have been based entirely on my gender. I hate to express negative sentiment about the scene, but every hip-hop show that I got to or perform at, I end up having at least one negative interaction with a man. Like on Friday night, I played in LaCrosse and a guy tried to get up on stage with me and tried to grab the microphone in the middle of a song and that’s just not something that you would have done to a man. On Saturday night, I had a guy try to rap battle me during my set, which is just not something that happens with the men who performed. It’s just twinged with this patriarchy and it’s very male dominated.

Reader: Well, hip-hop and rock have traditionally been pretty male dominated genres. Although, I think there’s been a good amount change since the 90s, I do keep hearing from women doing music that those attitudes still definitely exist.

Kat: There are a few women in the area that I’d like to name drop. Royalty, she’s from Superior. She’s doing it with five kids. Suzi Q, she’s been doing it longer than any of us. She’s not actively performing I don’t think.

Reader: Yeah, she’s been around awhile. She’s been playing with Rooftop Fable, but not so much as a rap artist lately. She’s been more of a singer. It seems you’re pursuing this more as profession now rather than just having a regular job and doing it on the side.

Kat: It started as a regular hobby, but it’s just become so demanding of my time and worth my time and energy to do it more. I’m a music teacher by day so it’s nice to just do music for a living, but I am paying bills doing it, which is unexpected. We’ll see what direction it goes.

For more information, find Kat Fox on Facebook. Her latest album stands out and should be picked up and listened to by any area hip-hop fans.