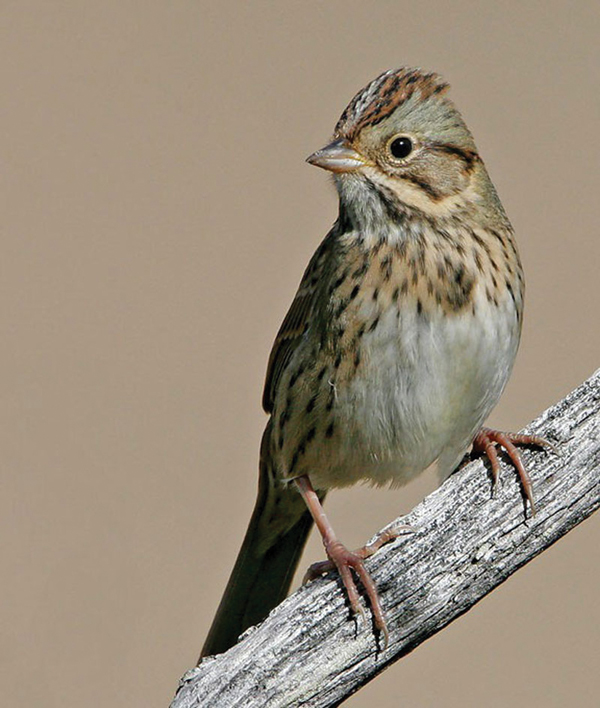 Blinking in the bright light, we filed out of the dark hemlock grove onto the sunny bog boardwalk at the Forest Lodge Nature Trail. Little bubbles and strange noises rose from below as the boardwalk’s supports sank into the peat under the weight of 27 birders from the Chequamegon Bay Birding & Nature Festival.

We listened intently for a bit, scanning the tree line for flitting warblers. Already that morning we’d seen or heard at least 16 species of birds, and now-familiar calls rang through the trees. A black-throated green sang his “I am black-and-green” from one side while a blue-headed vireo fluted sweetly from across the way. Ovenbirds shouted their “teacher, Teacher, TEACHER!” from all directions.

And then, from the little clump of trees in the bog’s center, came a rich warble that made us pause. The complex song was a jumble of high-pitched notes, rising phrases, and short trills. Usually, I rely on mnemonic sayings from John Feith’s Bird Song Ear Training Guide to pop into my head and guide my bird identification. But I’ve been playing the warbler section of the CD on repeat in my car for a month now, and no helpful mnemonic came to mind.
The voice reminded me a bit of a song sparrow, who also has a complex song, but begins with a distinctive 2-3 note introductory phrase. “Maids, maids put on your tea kettle-ettle,” says the CD helpfully. It also brought to mind the driving song of the winter wren, but without the same level of intensity.

Finally, someone got a fluttering glimpse of a brown-and-white streaked bird with a faint dark spot on its breast. Another birder matched that with his knowledge of sparrows who might live in a shrubby bog, and the name Lincoln’s sparrow floated around the group. Whipping out my brand-new smartphone with the Audubon birding app, I clumsily found the Lincoln’s sparrow entry and played a snippet of his song. A perfect match.

How many birders does it take to identify a Lincoln’s sparrow? Apparently 27.

Now the hunt was on. We scanned the cluster of trees and shrubs intently, waiting for some movement to give away his location. Suddenly, he flew up from the low thicket of leatherleaf and landed on the sparse branches of a little tamarack tree. Its soft, young needles framed him perfectly, showing off a bit of warm tan color among the brown streaks under his chin. Then swoop! He darted off toward a different brushy cluster of trees and belted out his (now familiar) song a few more times.

Lincoln’s sparrows aren’t very common throughout the eastern part of their range. With their population centered farther west, Lincoln’s sparrows don’t even pass through some eastern states like Florida and Georgia on their migration north from Central America. As a result, this secretive bird was a “lifer” for many of the group, meaning it was a species they’d never seen before, and they now could add it to their cumulative “life list.”

This bird of the brush breeds in northern and mountainous areas in scrubby, dense vegetation near water, usually above 3,000 feet in elevation. Lincoln’s sparrows are especially drawn to willow thickets for nesting. Northern Wisconsin is at the very southern edge of their breeding range, but this bog looks a lot like its preferred habitat, despite our much lower elevation at 1,400 feet above sea level.

While his song reminded me of the winter wren in some ways, it is completely different in others. The winter wren’s regional “accents” are enough to divide it into separate, though similar, species; the Lincoln’s sparrow has little geographical variation in its song. Scientists believe this is because juvenile Lincoln’s sparrows disperse far and wide, effectively homogenizing their population. Not much else is known about this sparrow, though, since its behavior, habitat, and similar male and female plumages make it difficult to study.

You can bet I’ll be checking back later, without a posse of 26 birders, to see if this vociferous little sparrow is a resident, or just passing through.