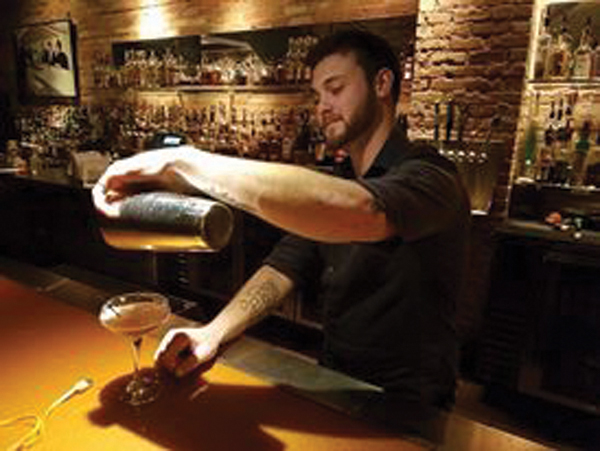 The other night I decided to catch a movie at Zinema 2 in downtown Duluth, and once the film was over, a friend and myself headed up to Zeitgeist Cafe on the Superior Street level. It’s been a little while since I’ve stopped in there. Upon the suggestion of my friend, Jon Port, I became introduced to their version of a French Martini.

Featured Bartender: Charles Latson volunteered to
demonstrate making the beverage. Charles has been
bartending for 18 months and has three years prior experience
as front of house at Hanabi.

Interest and Activities: Latson is a graduate of UMD in
Geology, he enjoys disc golf, and swimming in the summer.

Favorite Music: Tool, The Raconteurs, and Medicine
for the People.

Featured Cocktail: The French Martini. This drink developed out of the rising popularity of cocktails in the 1980s. The drink uses a vodka (in this case ,Tito’s out of Austin, TX), this is added with four ice cubes and pineapple juice, and shaken. It is then strained into a martini glass, and Chambord raspberry liqueur sits at the bottom. There is a nice chilled froth from the pineapple juice that separates the lip of the glass from the drink itself. The colors are what you’d expect; a yellow top with underlying burgundy. The drink takes on a pink color when it’s stirred.

How is it?: It was not surprising that the drink is definitely fruity and sweet. The play between the frothy pineapple and the raspberry of the Chambord create an almost marshmallow flavor that makes it something more than just the citrus. This is a nice dessert drink or something that would be great to sip on a warm evening.