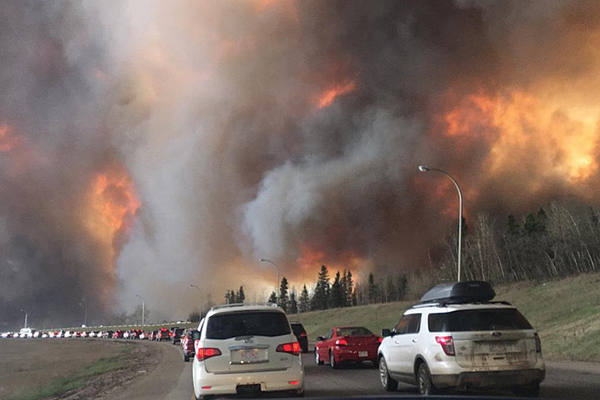 The firestorm in Alberta’s Fort Mcmurray  grew eight times as large in a couple of days- engulfing 85,000 hectares of land. As of the weekend, it was at almost 600,000 acres.  Not just one fire, it was series of fires, and as the fire enlarged, it created its own storm system, lightening and world. The fire has not yet been put out, although it moved away from the city ravaging the Wood Buffalo National Park, and forests in the north.

As the 80,000 people of Ft. Mc Murray moved into refugee camps to the south or tar sands worker camps in the north, one cannot ignore the irony.  The Minnesota PUC is holding court ordered hearings on the scope of an environmental analysis necessary to approve two new pipelines- the Enbridge Sandpiper with 640,000 barrels per day will be matched with the Line 3- straight to us from those burning Tar Sands .  Total : over l.4 million barrels of oil, considered by most climate scientists to be the dirtiest oil in the world.   Really.

Canada’s economic woes seem concentrated thus far on the $9 billion early on estimate to rebuild Fort McMurray, but one may wonder at the math, and what it all means.  Scientists at Munich Re, the world’s largest reinsurance agency predict that we will be spending 20 percent of world GDP on climate change related disasters within five years.   It seems unlikely, but a bit disconcerting.

In the meantime, scientists at Natural Resources Canada predict forest fires will dramatically increase in the next 50 to l00 years.  Add to that, temperatures are steadily rising- January was the second warmest on record, April the same, and average global temperatures are the highest in l36 years.

Meanwhile, at the Minnesota PUC hearings on the pipelines coming from the tar sands, fewer people attended the Rice Lake Hearing.  “ We really don’t believe the PUC anymore,” one Rice Laker told me. “Didn’t they hear us the last two times we testified?”  Tribal governments, and environmental groups have formally requested that the authority which would oversee environmental hearings would be the Minnesota Pollution Control Agency, not the Public Utilities Commission, a part of the Department of Commerce.  As Don Wedll,  a former Natural Resources Commissioner for Mille Lacs band of Ojibwe, and Honor the Earth Senior Policy Analyst points out,“ Asking the Department of Commerce to create and complete an environmental impact statement  is a lot like asking a professional baseball pitcher to conduct a brain surgery. It makes no sense.  The state of Minnesota has spent billions of dollars creating the Minnesota Pollution Control Agency for this purpose, why would we not use the state resource?”  As Wedll continues, “ the Department of Commerce is an expert at new business development, not environmental regulation.”  The  Environmental Quality Board will hold hearings, regarding the requests of environmental organizations community members and tribal governments to move the review to the state MPCA, whom the intervenors consider an appropriately qualified agency.

In the meantime, the sun was blood red, three days in a row last week- a consequence of the Ft. McMurray and northern Ontario wildfires.  To me, that’s what hell looks like