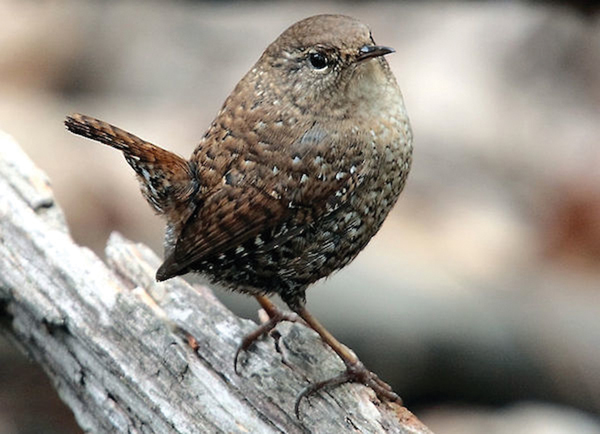 Winter wrens are tiny, energetic birds of the forest floor. Ounce for ounce, they produce more sound than a rooster!  Photo by Paul Stein, Creative Commons

The symphony of spring grows richer every day. Stepping out my front door this morning, a blast of birdsong overwhelmed my senses. The translucent, glowing greens and pinks of newborn leaves were muted by low, gray skies, but the warblers’ songs lit up my brain with a rainbow of synesthesia.
The upward buzz of the northern parula, who just arrived on May 12, (four days later than in 2015) sounds blue-gray with yellow and orange highlights. The sweet warble of a Blackburnian warbler sounds blaze orange as it ends in a high pitch I can barely hear. The “I, am, black-and-green” song of the black-throated green warbler sounds (what else?) like alternating dashes of black and olive.
Ok, so maybe I don’t have synesthesia, maybe it’s only that the bird songs trigger their photos in my mind, but the dreary morning felt decidedly colorful with the addition of so many perky songs.
These warblers are not known for being quiet. And yet, when the winter wren chimed in with his ringing, clear stream of tinkling notes, the other songs faded into a background jumble. This four-inch-long, one-half-ounce, drab-brown bird of the forest floor can sing with 10 times more power than a crowing rooster per unit weight. He’s been singing here for weeks now (only needing to migrate from the southern U.S.), and—although I’m excited for the new arrivals—his song still gives me a thrill.
Partly, I (and the lady wrens) am drawn to him by the power of his song, which can last up to 8 seconds as he bellows notes while both exhaling and inhaling. Party, I’m intrigued by the mystique of this tiny, well-camouflaged bird that spends his time scurrying through the underbrush with mouse-like hops. The scientific name of the winter wren (Troglodytes hiemalis) means winter-loving cave-dweller, but their caves are hollows and cavities in dead and fallen trees.
What do they look like?  A little brown blur that sometimes congeals into a short, perky, twitching tail. Only through the patience of photographers do I know that they have tiny, white checkers on their brown background, a white eyebrow, and light-brown legs.
My favorite birds are the ones who kept me company during my transient years, when I worked back and forth across the county from California to Maine. I didn’t grow up hearing winter wrens in Iowa (house wrens are more common there). I first knowingly heard one in the Boundary Waters of northern Minnesota, which automatically endeared them to my heart. On still mornings, their energetic songs would resound across glassy lakes.
When I moved to the redwoods of California, my morning jogging route took me right past the territory of a wren near a tiny stream. They love riparian areas with tangled underbrush. It was exciting—in such a drastically different forest—to hear a bird I recognized easily. I was also thrilled to hear the familiar voices of song sparrows while we took kids tide-pooling along the ocean.
The song sparrows didn’t sound quite like the ones I was used to back east, although their tone and cadence were quite identifiable. It’s well known that many birds, like people, have regional variations in their songs. A Minnesota friend who recently headed to West Virginia for a birding trip joked that she’d be hearing warblers with southern accents.
The winter wren song sounds like such a jumble to me that I can’t hear the regional variation. The lady wrens can hear it, though. Several years ago, a couple scientists set out to study the variations in several subspecies of winter wrens across the country. Birders had already noted that the wrens in the eastern U.S. sound more like wrens in England, and the western wrens share more characteristics with their colleagues from Siberia. They are a widely distributed species!
Or are they? Where the eastern and western types meet in eastern British Columbia, they hold neighboring territories. The males will respond to any wren’s song with territorial aggression, but the females only mate with males who sing the appropriate song. I’ve tried to hear the difference, but the nuances are lost on me. Only by looking at sonograms (technological synesthesia!) can I be as discerning as those lady wrens. You can see them for yourself, and read an excellent summary of the research at: slybird.blogspot.com/2008/07/winter-wren-is-multiple-species.html.
The discriminating taste of those female wrens seems to be all that’s keeping the two types from hybridizing. Scientists call this a “prezygotic barrier to gene flow,” because it prevents mating in the first place. Mating would actually result in fertile offspring, should it occur. This seems tenuous, but it is a strong enough divide that in 2010, scientists classified the birds as separate species: the Pacific wren and our winter wren. England and Europe also get their own species of winter wren, which, as the only wren outside of North America, they just call a “wren.”
And, seeing as how I wouldn’t last a minute trying to be a discerning lady wren, I will just call him a lovely sign of spring.