North Korea, Following China and India, Pledges No First-Use of Nuclear Weapons. The US, Not So Much 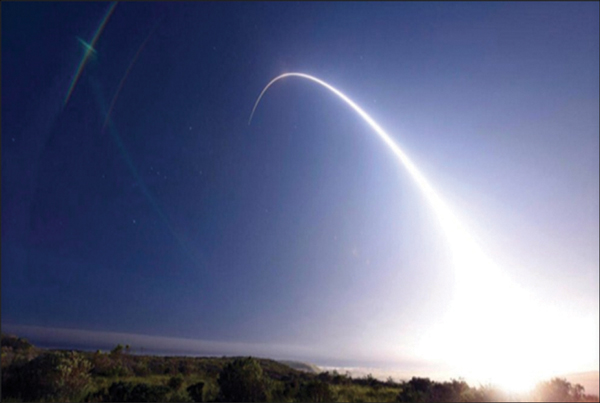 Pictured: For the second time in less than a week this past February, crews from Minot Air Force Base conducted a test launch of a Minuteman III missile. The rockets flew 4,500 miles across the Pacific from the Vandenberg Air Force Base in California. Three recent North Korean missile test launches reportedly failed.

North Korea’s May 6 declaration that it would not be first to use nuclear weapons was met with official derision instead of relief and applause. Not a single report I could find noted that the United States has never made such a pledge. None of three dozen news accounts even mentioned that North Korea hasn’t got one usable nuclear warhead. The New York Times did admit, “US and South Korean officials doubted that North Korea has developed a reliable intercontinental ballistic missile that would deliver a nuclear payload to the continental United States.”

Nuclear “first use” means either a nuclear sneak attack or the escalation from conventional, incendiary and thermobaric bombing to the use of nuclear warheads. Perhaps because the US atomic bombings of Japan have always been justified by the perpetrators, the US has never renounced “first use,” and presidents have threated first use as many as 15 times. In build-up to the 1991 Persian Gulf bombing, US officials including then Defense Secretary Dick Cheney and Secretary of State James Baker publicly and repeatedly hinted that the US might use nuclear weapons. Later, in the midst of the bombardment, Rep. Dan Burton, R-Ind., and syndicated columnist Cal Thomas both openly promoted demolishing Iraq with H-bombs.

In April 1996, President Bill Clinton’s deputy Defense Secretary Herald Smith publicly threatened to use nuclear weapons against non-nuclear Libya -- which was a party to the Nuclear Nonproliferation Treaty -- for allegedly building a secret weapons plant. When Clinton’s Defense Secretary William Perry was questioned about this threat he repeated it, saying, “[W]e would not forswear that possibility.” (The Nonproliferation Treaty forbids any nuclear attack against other state parties.)

In “Presidential Policy Directive 60” (PD 60) of Nov. 1997, Clinton made public the nuclear first-use intentions of his war planners. US H-bombs were now being aimed at nations identified by the State Department to be “rogues.” PD 60 alarmingly lowered the threshold against nuclear attack possibilities. The Clinton doctrine “would allow the US to launch nuclear weapons in response to the use of chemical or biological weapons,” the Los Angeles and New York Times reported. (Arguing that we need H-bombs to deter chemical attacks, is like saying we need nuclear reactors to boil water.) Throwing deterrence policy under the bus, “Clinton ordered that the military … reserve the right to use nuclear arms first, even before the detonation of an enemy warhead.”

Clinton’s first-use policy was a slap in the face to the National Academy of Sciences (NAS) -- the nation’s highest scientific advisory group -- which recommended six months earlier, on June 18, 1997, that the US, “declare that it will not be the first to use nuclear weapons in war or crisis.” In April 1998, Clinton’s US Embassy reps in Moscow coldly refused to rule out the use of nuclear weapons against Iraq, saying, “…we do not rule out in advance any capability available to us.” A “no first use” pledge would free US officials from the burden of making these vaguely-worded but nevertheless terroristic nuclear threats.

Putting an end to these ultimate bomb scares would bring US action in line with Presidential speechifying which has regularly denounced “nuclear terrorism.” An international agreement on “non-nuclear immunity,” adopted by five nuclear-armed states on May 11, 1995, has not quelled charges of hypocrisy made against them. The pact is full of exceptions -- re. PD 60 -- and is nonbinding. Only China has made this unequivocal pledge: “At no time and under no circumstances will China be the first to use nuclear weapons and [China] undertakes unconditionally not to use or threaten to use nuclear weapons against non-nuclear countries and nuclear-free zones.” India has made a similar no-first-use promise.

A formal US renunciation of first use would let cooler heads prevail by ending the debate over so-called “threshold” use of the Bomb. It would also end the blatant public duplicity of claiming that nuclear warheads are only for deterrence while preparing for attacks “before the detonation of an enemy warhead.”

Pledging “no first use” would save billions of dollars in research, development and production, as well as the cost of maintaining first strike systems: B61 gravity H-bombs, Trident submarine warheads, Cruise and Minuteman-3 missile warheads.

Significantly, nuclear weapon controllers who have used their first-strike “master card” believe they’ve been successful -- the way a robber can get a bag of cash using a gun without pulling the trigger. Nuclear war planners want to keep this WMD “ace” up their sleeve. Historically, there is a heavy stigma against formally renouncing nuclear first use, since to do so might further call into question official reasons for having crossed the line at Hiroshima and Nagasaki in 1945.

In spite of the possible hint of impropriety that may accrue to its atomic bombing of major cities, the United States should embrace China’s unambiguous language and promise never to use nuclear weapons first or against non-nuclear states. If President Obama is interested in easing world tensions, he could replace Clinton’s presidential directive with one of his own declaring that the US will never be the first to go nuclear.