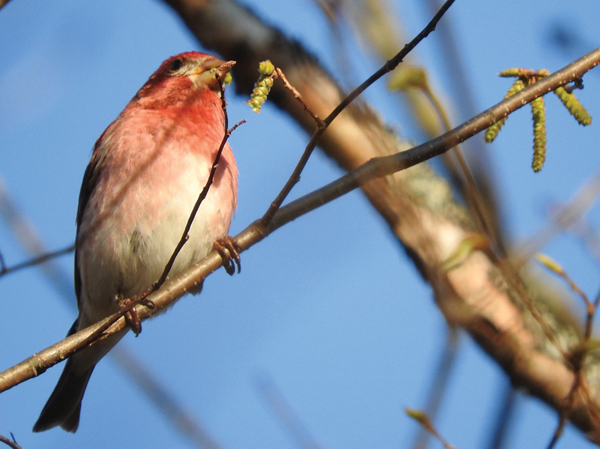 Birders are often torn in spring. We want the migrants to have enough food when they pass through or arrive on territories, but we also prefer to be out with the woods unaccompanied by the birds’ food source: black flies and mosquitoes. In addition, once tree leaves expand, birds become harder to see. Photo by Emily Stone.

Birdsong and sunshine poured through open windows this morning, wafted in on a warm breeze. It was the distinctive call of a black-throated green warbler that finally lured me outside. “Zee-zee-zee zoot-zee” he shouted. “This is my territory and don’t forget it!” “Welcome home!” I felt like yelling back.

Several other melodies joined his refrain: the trill of a yellow-rumped warbler (a song I’ve been hearing for a few weeks already); the “Hey Sweetie” of a black-capped chickadee (I’ve been hearing that since January); and the tinkling stream of clear notes bellowed out by a winter wren with incredible breath control and no desire to let you get a word in edgewise. A pair of phoebes, and a few other mystery birds, also contributed their verses to the epic ballad of spring.

As I scanned the treetops to catch a glimpse of the feathered minstrels, I noticed with dismay that the maple trees were glowing brightly with tiny, translucent baby leaves among big clusters of dangling flowers. New life is beautiful, but leaf-out makes birding that much harder. I also heaved a sigh at the swarm of freshly-hatched black flies vying for my blood. Some signs of spring are not so pleasant.

It’s good for the migrating warblers, though, that the insects (and food for the insects) the birds need to eat are hatched and/or growing. When the long-distance migrant birds react to changing day length in South America and start their journey north, they have no way of knowing what weather will await them on the next continent. If we have an early spring up here, they can’t get bumped up to an earlier flight. If we have a late spring, they don’t get a text notifying them that their flight has been delayed.

These long-distance migrants tend to arrive like clockwork each spring, with very little change in their arrival dates. What variability occurs is mediated by the weather. As the birds head toward their breeding grounds, storms and lack of food will slow them down in a late spring, while favorable conditions will encourage steady progress north in an early spring.

While the weather this spring has been lovely for a few weeks now, this is the first morning I’ve heard the black-throated green warbler, who started its journey in Central America. The yellow-rumped warblers (here for a while now) may have only been wintering in the southern U.S. The blackburnian warbler (a striking, bright-orange firecracker) is still on its even longer journey from South America. It will probably arrive on about the same day it did in 2013 (May 15) even though that was the year I went cross-country skiing for my 50th day of the year on May 4.

In the meantime, the plants (who can’t go south for the winter) are controlled more closely by spring temperatures—although some regulation by day length plays a role in protecting them from blooming during a January thaw. I just photographed a plethora of spring flowers at St. Peter’s Dome. On Mother’s Day weekend 2013, I was snowed on while searching out a few spikes of furled leaves just emerging along that trail.

2013 was a great year for birding, though, because the birds came back all at once before the trees had a chance to leaf out. Visibility was amazing! Food-finding was probably a challenge for the birds, though, since local insects are also more responsive to temperature than day length.

Spring weather is always variable, but as climate change strengthens, the variability will trend earlier. Short-distance migrants might be able to shift their patterns and stay in sync with plants and insects on their breeding grounds. Researchers have found that the adaptation doesn’t happen within individuals, though. Individual birds arrive at the same time, year after year. Instead, natural selection favors the birds that are programmed to arrive earlier. They have more babies with similar, early genes, while the genes of their late-arriving peers go back to the dust.

I’ve seen a similar sentiment in a political meme floating around the internet right now, a quote by Arturo Albergati: “People don’t change their minds. They die, and are replaced by people with different opinions.” While this seems a little morbid as I stand surrounded by glowing, singing, flowering, buzzing life in the most vivid season of the year, that adaptation through natural selection is actually a key to the future of life.

Observing seasonal events is also known as phenology. Come visit the Museum’s brand-new exhibit about phenology: “Nature’s Calendar: Signs of the Seasons” to learn more! Check our Calendar of Events for phenology journaling programs to inspire you to record seasonal events from year to year.