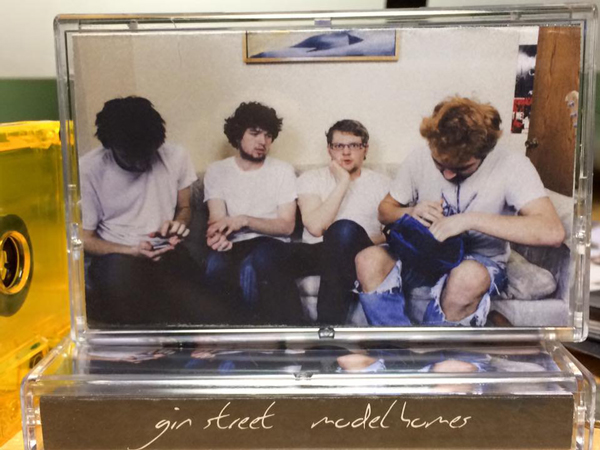 In case you missed Gin Street at Beaner’s for Homegrown, don’t fret, they’ll be kicking off a midwest tour soon with their new cassette release titled, “Model Homes.” Holding down vocals and guitar is a familiar name, Gabe Naughton, known for bands such as Paper Parlor.
This album is a little gem of post-punk/emo/indie-rock mastery. To try to describe the feel, regionally, my favorite band that is similar is the group Tiny Moving Parts, although there’s a bit more screaming and they are a tad more technical. Of bands that I know off hand that are a little more well known, it’s along the lines of groups like Real Friends and Title Fight.
There is plenty of great guitar work and anguished and honest vocals on this album, which is often the foundation of music like this. Some into more hardcore punk might argue that the vocals are a little whiney, but it doesn’t bother me. When this group hits, they hit hard from their more melodic soft parts to intense and melodramatic heavy breakdowns. Maybe this isn’t for everyone, but I’m kind of a sucker for all of the above.
The album opens with a laid back and stripped down guitar riff that is not unlike Modest Mouse in the track “Home is What You Make It.” Likewise, Naughton’s vocals are exposed and quiet at the start, however the song progresses in complexity to a sad, swaying, beautiful full band orchestration. Once the distortion kicks in, it continues to build to full on attacks on the guitar and drums with Naughton wailing over the rather abrupt and technical display of musicianship. The album is off to a good start as far as what they’re going for is concerned.
The songs doesn’t always start slow and end hard. The track “Plastic Fruit” stands close to standard punk rock from the start with some extra flares instruments and then breaks down in something that kind of reminds me of the Hold Steady with the lyrics, except a little more emo. “I rode my rally racing bike up to Hawk’s Ridge and looked out over the city…I swear I’m the shyest person I’ve ever met. I’m an anxious mess with a God complex.”
With songs like “Lucifer’s Agents” towards the end, it’s shown that some rather unique guitar leads are not beyond this band’s ability. The guitar work is actually pretty amazing if you pay attention. There’s often some subtle thing going on that’s usually what I’d consider more essential to the feel than being too showy. Sure, the lyrics are filled with some self pity at times, but they are conversational in manner and seem to explain the situation while bringing out somehow relatable imagery and statements. They flow from meek and sorry to sincerely determined and truthful with energy. It’s really the dynamics of the band as a whole that drives home their overall sound. Yeah, there are some bands out there that are doing something similar, but Gin Street is doing a good job with their take on it. Their tour kickoff is on Thursday, May 19 at Studio 15.