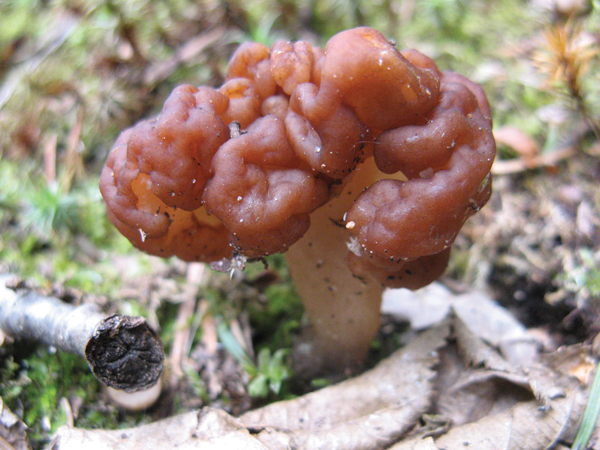 False morel mushrooms look only superficially like the edible true morels. It is important to look closely, because an incorrect identification could make you uncomfortable. Nonetheless, they are fun to see in early spring! Photo by Emily Stone.

A birch twig tinkled musically in my spokes as I cruised along a mountain bike trail on opening day. Winter winds had sprinkled debris liberally over the ground, and one stick or another was caught noisily in my wheel for most of the ride. Peepers and chorus frogs rounded out this aria of the Symphony of Spring.
This particular twig wasn’t falling out on its own, so I stopped briefly to help it on its way. As I planted my toe on the ground for balance, an odd, brain-like shape next to it caught my eye. The brownish lump would have perfectly matched the “burnt sienna” crayon in my 96-color set from third grade. I always loved that color.
As an identification started to coalesce in my subconscious, I picked up the mass. Just as I expected, the cool, smooth, mushroom cap crumbled in my grasp. The convoluted undulations of the cap became shards on the ground, and I was left holding the stouter, paler stem.
While most mushroom fanatics rave over the spring crop of morels, and even novices who don’t pay attention to any other mushroom sauté that holy grail in butter and garlic, all I ever find are these false morels. These early spring mushrooms (sometimes sprouting under melting snow) grow on sandy soil under pine trees and seem to prefer disturbed places, such as trailsides.
I know there are true morels near Cable—but I’ve never seen one. (And no one will tell me where to find them, either!)
While the convoluted cap of this imposter looks superficially like morels, it is easy (and important) to tell them apart. For one, the lumps on the caps of false morels bulge outward. On true morels, the texture is formed by pits sinking inward. When sliced in half, one discovers that the cap of a true morel is fused along the entire length of a hollow stem. In contrast, the cap of a false morel is attached only at the top of the stem, and the stem itself is filled with either mushroom flesh or cottony mycelia.
I know how tempting it is to make a “hopeful” identification when you really want to find a particular species. A few years ago, I saw a lumpy mushroom cap hiding among spring flowers, and exclaimed “morel!” before looking more closely. Luckily I didn’t continue to trick myself into believing in a wrong ID. Once I pulled apart the loosely attached cap and non-hollow stem, its true identity was obvious. With any wild edibles, hopeful IDs can be dangerous.
While many people have eaten false morels, they are associated with two to four per cent of all mushroom fatalities in Europe. Reportedly, their toxins can be removed by a stringent regimen of drying, boiling, rinsing, and boiling again, and they are considered a delicacy in Finland, Bulgaria and Spain. I know a Russian who eats them regularly! In contrast, Germany, Sweden, and Switzerland restrict the sales of false morels.
One of the hazards of consuming false morels is that the toxin levels vary widely among populations of mushrooms. Some areas seem to grow “safer” mushrooms than others. Nobody knows how toxic any false morel will be in any location. While the false morel in North America is also known as Gyromitra esculenta, it may not even be the same species as the European false morel.
So was I touching poison when I crumbled that lump along the mountain bike trail?
Well, no. Touching a false morel won’t hurt you. The problem comes when you eat it, or inhale the steam from cooking. Their active toxin is called gyromitrin, and your body metabolizes it into monomethylhydrazine, a chemical found in rocket fuel. That is not something you want in your stomach.
Boiling will begin to evaporate the gyromitrin, which smells chocolaty, but is not good to inhale. Gyromitrin destroys red blood cells. It damages your liver and gut. And it doesn’t take effect immediately. It takes 6 to 12 hours to develop symptoms. But by the time the nausea, cramps, vomiting, diarrhea, and fever begin, there’s not much you can do. Most people receive supportive care and recover after several days of illness. In other cases, convulsions lead to a coma and death.
Even if you don’t get sick from eating a single helping of false morels the next batch might be more toxic, and repeated exposure to the toxin causes cancer in mice, and maybe us, too.
All that drama is contained in a small, lumpy packet colored a beautiful shade of brown.
Musical twig removed, I continued pedaling down the trail. Before I could swerve, two more false morels appeared in the center of the trail, and then shattered under my tires into a burnt sienna mess.