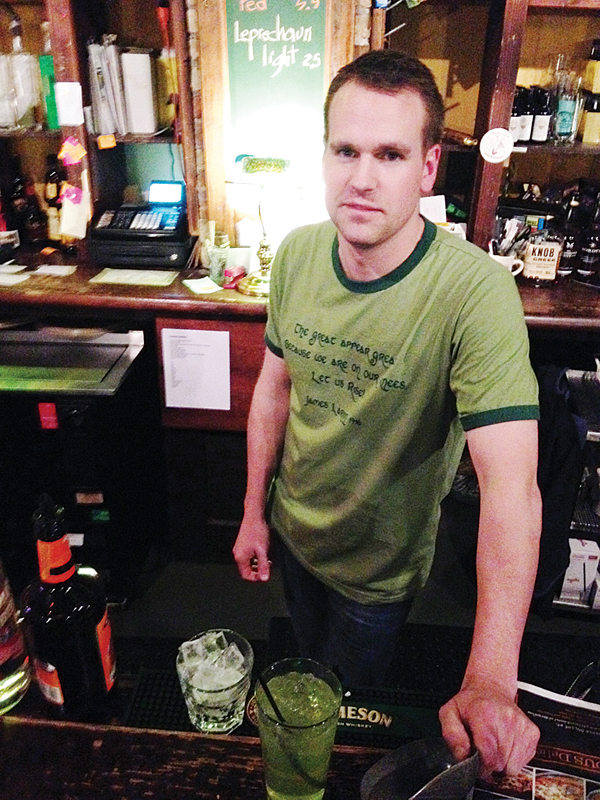 I’ve once again found myself down at Carmody, and I will admit it’s been awhile since I’ve done a new Cocktailing column. This time bartender, Dave Clark, was eager for me to try something. Of course I was obliged to give it a try. If you are a bartender who has a special drink creation or know someone who does, please email info@readerduluth.com and I’ll be happy to feature a new cocktail or shot.

Featured Bartender:  Dave Clark. Dave has been bartending for seven years with two years at Carmody Irish Pub. You can catch him serving down in Canal Park at Grandma’s on some nights.

Interests and Activities: Clark plays drums, currently with the local group Sounds of Shipwreck. Sand volleyball and golf are also a couple of things he enjoys doing in the warmer months.

Featured Cocktail: The Emerald Island. Clark describes this as a “feel good summer cocktail,” and I’m certainly not opposed to that notion. First off is a “Swedish raspberry vodka.” Absolute would make a fine choice, of course most any similar vodka would suffice. Next, it takes an “imported dry gin.” To balance out the juniper and raspberry flavors, he adds in some dry peach liquor, as well as a good touch of Midori, or some other Melon liquor, to give it it’s “Emerald” hue. Finally it is topped of with some sour. For Clark, he recommends not using it from the soda gun, as that gives it more of a lemon-lime soda feel.

How is it?: This drink is like the fruity, less bold, cousin of a Long Island. There’s a good amount of alcohol, but the flavors blend together in a way where it seems like there’s hardly any. There’s vodka, gin, and sour components and it’s served in a pint glass to have room for all of the ingredients would be the main similarity. The melon, peach and raspberry flavors play together very well and make the gin hardly noticeable. As the days warm up, this drink is a special treat to chill out with. Overall, it’s smooth and sweet, without being too overpowering on the sweet or alcohol taste.