Chernobyl, and Cesium, at Thirty 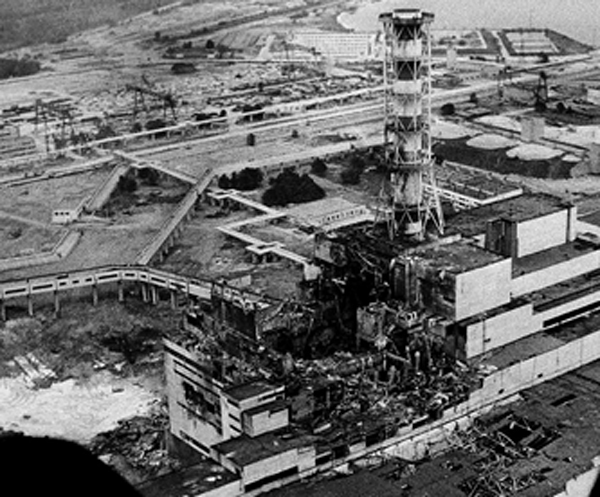 April 26 is the 30th anniversary of the reactor meltdown and radiation disaster at Chernobyl in Ukraine, which brings to mind cesium. Thirty years is how long it takes for half a given amount of cesium-137 -- dispersed in huge quantities from Chernobyl (and Fukushima) -- to decay into radioactive barium. This 30-year “half-life” means half of the jettisoned cesium-137 is still around -- over four million billion “Becquerels” in Europe alone, according to TORCH: The Other Report on Chernobyl. This cesium will persist in decreasing amounts in soil, water, food for another 270 years.

Chernobyl’s two massive explosions and a 40-day-long fire spewed thousands of tons of radioactive dust around the world. Maureen Hatch, writing in  HYPERLINK "http://services.oxfordjournals.org/cgi/tslogin?url=http%3A%2F%2Fwww.oxfordjournals.org" Oxford Journals March 30, 2005, reported that “contamination of the ground was found to some extent in every country in the Northern Hemisphere.” Yet it is not unusual for young people to know almost nothing about Chernobyl. Infants at the time may have ingested the dispersed poisons. The Minneapolis Star Tribune reported May 17, 1986 that “since radiation from the Chernobyl nuclear accident began floating over Minnesota last week, low levels of radiation have been discovered in … the raw milk from a Minnesota dairy.”

The UN classifies Chernobyl and Fukushima as the worst environmental catastrophes in history; they are the only Level Seven radiation disasters ever to hit the top of its 0-to-7 scale. Like H-bomb tests of an earlier era, the four meltdowns are acts of unlimited, multi-generational ecological warfare: serial killers altogether hydrological, biological, psychological, economic, genetic, and agricultural. The number of illnesses, cancers and fatalities these radiation gushers have caused is unknown, but the plague of cancer ravaging the general population is obvious.

Chernobyl saw the permanent evacuation of 350,000 from an 18-mile “exclusion zone” around the wreckage, and from hotspots in Ukraine, Belarus and Russia. Japan is limiting its evacuation to 200,000 from within a 12-mile radius of Fukushima, even though cesium-137 was found 25 miles from the three meltdowns in amounts over twice the evacuation standard used at Chernobyl. Japanese surveyors found up to 3.7 million Becquerels-per-square-meter in the populated area. The abandonment standard used at Chernobyl was 1.48 million Bq/m2, according to the New York Times. The nuclear industry gets off lightly because hundreds of millions of hospital patients around the world cannot prove their illnesses came from a particular radiation exposure.

The most often-repeated fatality estimate is from the UN’s 2006 Chernobyl Forum, which reported “9,000 excess deaths for the most affected areas.” The study is regularly misreported as having identified “4,000 Chernobyl deaths,” and it’s been criticized for investigating only those fatalities expected in Russia, Belarus and Ukraine -- although the majority of radioactive fallout was deposited outside those former Soviet republics.

Author Alexey Yablokov says, “There is no reasonable explanation for the fact that the [Chernobyl Forum] completely neglected the consequences of radioactive contamination in other countries, which received more than 50% of the Chernobyl radionuclides....” Yablokov’s book, Chernobyl: Consequences of the Catastrophe for People and the Environment published by the Annals of the New York Academy of Sciences, estimates 985,000 Chernobyl deaths.

Alternately, Ukraine’s Minister of Health Andrei Serkyuk declared in 1995 that 125,000 Ukrainians had died from the effects of Chernobyl. Serkyuk said a large share of casualties were among children, pregnant women and rescue workers or “liquidators.” Liquidators were the soldiers, farmers, miners and factory workers conscripted to work removing and burying radioactive topsoil, debris and equipment from near the smashed reactor using inadequate protective gear or none at all. The Los Angeles Times reported in 1998 that “Russian officials estimated 10,000 Russian ‘liquidators’ died,” and quoted health officials who said “close to 3,600 Ukrainians who took part in the cleanup effort have died of radiation exposure.” However, Ukrainian authorities said in 2009 that over 25,000 liquidators died getting the accident under control and constructing a concrete shield over the wreckage.

Everyone in the global north is subject to uninvited, unwelcome, dangerous radiation exposures caused by Chernobyl, Fukushima and routine reactor emissions. The industry treats everybody like liquidators, but has a snappier name for us. We’re called “sponges.”