Yesterday (April 11, 2016) constituents of Minnesota US Congressperson Rick Nolan were informed of a 2015 House Resolution (HR 14) that he and 40 other US Congresspersons signed onto (26 Democrat/15 Republicans). Among the co-sponsors were 3 Minnesotan DFLers Rick Nolan, Collin Peterson and Tim Walz. A nearly identical resolution had been introduced in the US Senate on June 2, 2015. Neither of Minnesota’s Senators, Amy Klobuchar and Al Franken, signed onto that one.

Nolan’s letter concluded: “The time for secrecy is over. The American people and the families of the victims of 9-11 deserve the truth.”

Here is the essence of the resolution:

(1) the President should declassify the 28-page section of the Joint Inquiry into Intelligence Community Activities Before and After the Terrorist Attacks of September 2001; and

We long-suffering patriots of the 911 Truth communities agree, although the top secret censored-out 28 pages will not contain the massive amount of evidence from witnesses of 9/11 who were prohibited from testifying. So I submit the following article that contains a small amount of that essential evidence/ This article has been slightly up-dated, this time with appropriate photos, from a September, 2011 Duty to Warn column that was published around the world on the 10th anniversary of 9/11/01.
September 11, 2011 will be the 10th anniversary of the sudden collapse and pulverization of three World Trade Center (WTC) towers (1, 2 & 7), only two of which had been hit by planes. Essentially the only materials that were not reduced to fine powder in the collapses of WTC towers 1 & 2, were scores of massive steel core columns, each 110 stories tall, that were sectioned by highly explosive thermite cutter charges, into 30 feet lengths, ready to be trucked away.
A number of these sectioned steel beams had been hurled up to 600 feet away and embedded into neighboring skyscrapers.
These realities are only a small part of the emerging provably true story that powerful media, military and political forces have been trying to cover-up for the last 10 years, and it is expected that the 10th anniversary will be managed to continue the myths that say that the three towers came down by low temperature jet fuel or office fires after two jet planes struck the tops of only two of the towers. A number of politically-motivated forces in the government, the military, the national security agencies, the major media, Wall Street, various war-profiteering corporations and who knows what else are still intent on continuing the massive “Cover-up of the Crime of the Century” that was unleashed on that fateful date. 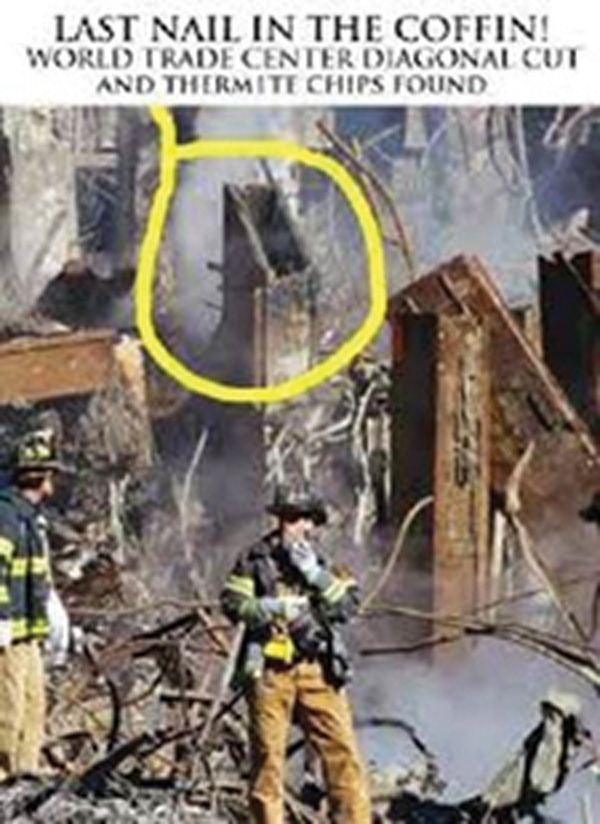 The transected base of one of the massive steel columns that had been instantaneously melted through by pre-planted demolition charges. Photographers and investigative journalists were severely restricted from the site in the immediate aftermath. 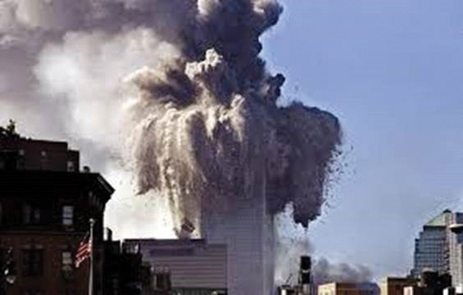 These groups are obviously trying to keep the very unconvincing lie going as long as possible until they can find a way to excuse themselves for their complicity in the crime and cover-up. Maybe they don’t yet know how to save face for being part of the crime that caused so much suffering and wasted so many trillions of tax dollars.

Perhaps the perpetrators are part of a coup attempt and are hoping that - if successful - they won’t ever have to face criminal charges. (Covering up a crime is itself a crime in the US). Maybe they feel obligated to continue to justify the endless illegal but highly profitable wars that were started in Afghanistan and Iraq and Pakistan and Yemen and then Libya and Syria as a direct result. Folks like Dick Cheney are surely shaking in their cowardly boots at the thought of being subpoenaed to testify under oath about their role in 9/11.

Big Commemoration “Celebrations” Coming Up on 911

Whatever is being planned for the official 10th anniversary commemoration events, you can be sure that there will be a lot of money spent at Ground Zero, the Pentagon and at the Shanksville PA commemoration site where no effort had been made by rescuers on 9/11/01 to go into the smoking slit trench (supposedly an old mine shaft) to search for survivors of the alleged crash (and where no plane, luggage or passenger debris was seen by anybody!).

Lots of sacrificed living, dead or dying New York firefighters will be appropriately recognized that day and their sufferings lamented, but the firefighters who were there – and who have been trying to testify about what they saw and heard – have been black-listed by the media. What they saw were controlled demolitions and what they heard were multiple explosions all over the Twin Towers (including the sub-basements) even before the buildings began coming down. But they will not be interviewed on national TV or radio that day because to do so would destroy the complacency, the certainty and the myths that have now been established as pseudo-fact.

Rudy Dent is one of those heroes with the courage to join in the call for a re-investigation. His powerful testimony can be heard at:  HYPERLINK “https://www.youtube.com/watch?v=nQrpLp-X0ws&ebc=ANyPxKpGyzNzFq0rx_UQlQfWCExoJwtti-CKeBLM-20TAvBcXa8Z3-cMaKZnlHUviELnnQio_7sc&nohtml5=False” https://www.youtube.com/watch?v=nQrpLp-X0ws&ebc=ANyPxKpGyzNzFq0rx_UQlQfWCExoJwtti-CKeBLM-20TAvBcXa8Z3-cMaKZnlHUviELnnQio_7sc&nohtml5=False 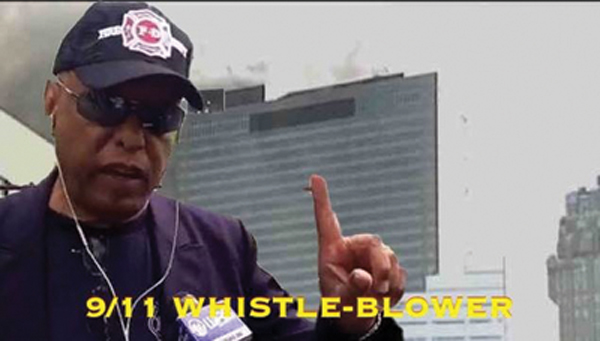 Rudy Dent, 9/11 eyewitness and 32-year veteran NYFD firefighter who knows that 9/11 was a false flag operation

There are too many revelations about the crime of 9/11 to believe the official conspiracy theories anymore. These truths need to be told and the perpetrators of the lies need to be exposed and brought to justice before they die.

The easily debunked conspiracy theories so vigorously laid out by the Cheney/Bush/Rove/Rumsfeld/Rice/Ashcroft et al administration depend on the following ridiculous premise that:

Steel-reinforced skyscrapers (containing 200,000 tons of steel beams and steel columns, plus 400,000 cubic yards of concrete) can be burned down, collapsing into their own footprints within 10 seconds by brief jet fuel fires, whose heat generation are totally incapable of even softening steel beams, much less instantly melting them or sectioning them into shovel-ready lengths that allowed for rapid export to third world nations overseas on the order of Mayor Giuliani of New York.

The removal of these multiple 30 foot sections of steel columns and beams conveniently eliminated them from the possibility of forensic examination by crime scene investigators - a federal crime that should have placed Giuliani in the interrogation box, to testify, under oath, in a federal court of law.

One of the many “clinchers” that have put the lie to the official White House conspiracy theory is the scientific finding, by Brigham Young University physics Professor Stephan Jones, Danish scientist Niels Harrit and others (Jones was eventually fired by BYU for poking his nose into areas where he was not wanted) was their examination of many samples of the dust at Ground Zero and the findings of large amounts of weapons-grade nanothermite, a highly explosive, high heat-generating incendiary substance that is only available to the US military and is only used for demolition purposes. (For more on this issue, check out:  HYPERLINK “http://world911truth.org/steven-jones-on-nanothermite/” http://world911truth.org/steven-jones-on-nanothermite/) 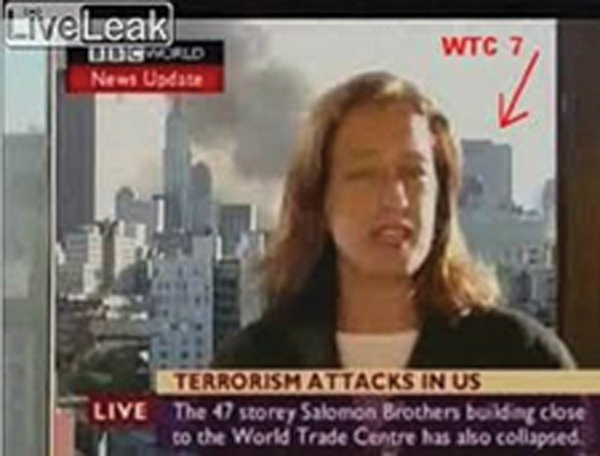 BBC journalist Jane Standley reporting that WTC 7 had collapsed 20 minutes before it actually collapsed, showing fore-knowledge of the event https://www.youtube.com/watch?v=ltP2t9nq9fI

Suspiciously, the collapse of WTC 7 was never mentioned in the 9/11 Commission report! WTC # 7 was a 47 story steel-reinforced skyscraper that was a couple of blocks away from the twin towers. It was not hit by a plane and had only a few unexplainable small fires on lower floors when, as WTC owner Larry Silverstein admitted in a public television interview, he and fire department officials decided to “pull it” (demolition industry jargon for bringing down a building by explosive devices). 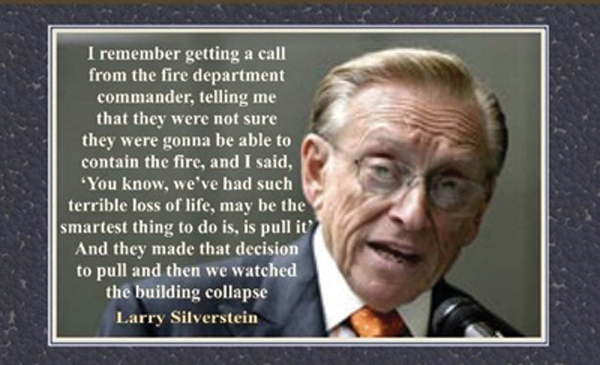 WTC owner Larry Silverstein admitting, in an NPR interview, of his complicity in the controlled demolition of WTC 7

The pulverization of the Twin Towers was so total that there was nothing left of any of the 110-floored WTC towers 1 & 2, despite the fact that each floor was an acre in size and made of steel-reinforced concrete. This reality should totally destroy the ridiculous official theory of a pancake collapse of towers 1 & 2, which would have left a 6 story pile of rubble.

Every honest demolition expert on the planet who has studied the videos of the collapses on 9/11 will testify, if his job or life isn’t on the line, that the buildings were imploded and not brought down by fires or jet planes. There is no debate about that fact among honest scientists. 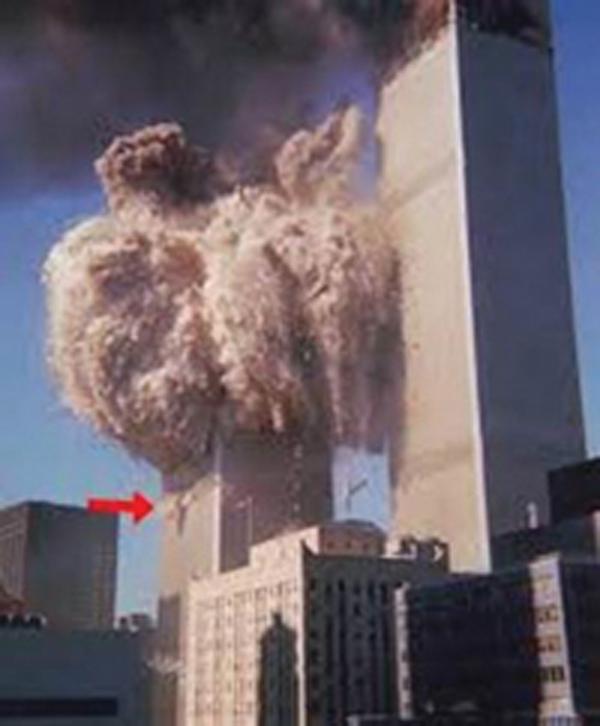 WTC Tower exploding into fine powder, exhibiting one of the many “squibs” seen from other angles (from some of the many pre-planted explosives)

Every well-trained scientific expert, including the over 2,000 courageous architects and engineers that are members of Architects and Engineers for 9/11 Truth (www.ae911Truth.org) will point out as supporting evidence against the official theory the numerous “squibs” of exploding smoke that are seen on all slow-motion videos of the Twin Towers collapses, occurring just below the leading edge of the collapsing buildings. These squibs represent internal heat-generating, high energy explosives designed to sever steel beams so that the buildings will collapse in their own footprint, leaving minimal damage to adjacent structures.

Explosions in the Buildings Before They Fell

TV commentators reporting live on the scene that morning interviewed scores of eyewitnesses who testified that they had heard multiple bombs going off at the bases of the buildings before either of the Twin Towers fell. Reporting live and un-edited, many of these journalists said that they themselves had heard explosions in the buildings while the towers were still standing. Those truthful stories were never repeated by these journalists on TV again. But they were recorded and are now evidence to debunk the official story!

Since 9/11/01 there have been an increasing number of intelligent, courageous people, including scholars, philosophers, theologians, religious leaders, scientists, physicists, chemists, architects, engineers, intelligence agents, demolition experts, airline pilots, medical professionals, military veterans, etc who have recognized that the official White House theories are patently absurd, anti-scientific, illogical and provably false. These diverse groups have accumulated a tremendous amount of documented evidence, all of which is accessible on their websites. A list of links to such websites can be found at most 9/11 Truth websites.
The mainstream media’s complicity in the suppression of the truth about 9/11 and the illegalities of the ensuing wars are, it seems to me, not only criminal but also treasonous. Therefore, the searchers for truth, especially those in the peace, justice, antiwar and reconciliation movements need to stand up and demand justice in the form of a truly independent commission that does not disregard important witness testimony or the clear scientific evidence that disproves the official version of 9/11.

If that re-investigation doesn’t happen, justice will continue to be denied for the thousands of American victims of the WTC collapses (the sickened and prematurely dying Ground Zero rescuers, cleanup crews and their families), the hundreds of thousands of dead, dying and permanently wounded US soldiers and veterans who were deceived into fighting in the illegal wars and the millions of their Muslim civilian enemy-victims who were innocent of the crimes of 9/11, especially the women and children. And if justice continues to be denied, the America that we used to know and used to love will continue to disappear into the neo-fascist police state reality that is already threatening our disappearing democratic values.

I urge the constituents of the 41 congresspersons who have co-sponsored House Resolution 14 have their representatives review all the evidence concerning 9/11 and insist on a full, thorough, independent re-evaluation of What Really Happened on that day. The list of those politicians can be found at  HYPERLINK “https://28pages.org/hr-428/” https://28pages.org/hr-428/.