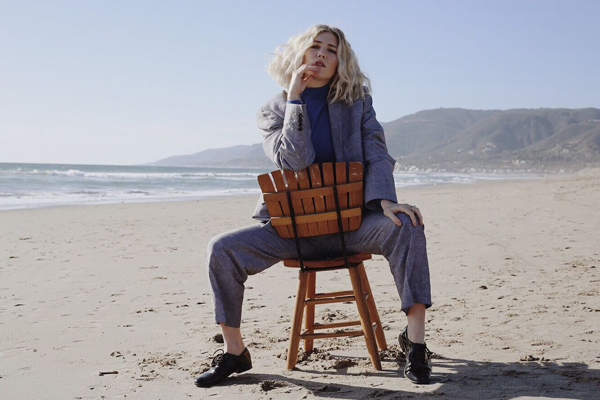 On Friday, April 8, Twin Cities musician Caroline Smith (formerly Caroline Smith and the Good Night Sleeps) will perform with her band at the Red Herring Lounge with fellow Cities act Dizzy Fae. As with many musicians, Smith started from humble beginnings singing choir and playing guitar in Detroit Lakes, Minnesota. She moved to on perform regularly in Minneapolis and to fulfill her dream of playing the First Avenue Mainroom and packed the place. Now a regional success, we got the chance to talk with Smith about getting to where she is now, her music and a few other things she has going on.

Reader: How does someone who started off playing music as girl in Detroit Lakes end up packing places like First Ave.?

CS: I would say through diligence, patience, hard work and perseverance. *laughs* No, it was all a step by step process. I started playing small restaurants in Detroit Lakes and Fargo and then through that I got a gig opening up for Mason Jennings in Fargo. I made friends with Mason and his sound guy, Chad, and they hooked me up at this legendary spot that’s now closed, the 400 Bar. I was going to school down there and I started playing there every week on Wednesday nights. That’s how Mason Jennings got his start. So, that’s how I met my band. My drummer was the door guy at 400 Bar, which is funny because my drummer is this skinny dude with grandma glasses and he was the bouncer there. I met by band there and started playing shows and worked really hard at it.

Reader: I noticed that you dropped the name “The Good Night Sleeps,” is that just because it was taking up too much space on flyers?

CS: It’s really interesting, I’ve been with my band for so long, it’s like we grew up together. So I think once we matured and landed in our mid-20s that name didn’t really suit us as well. We weren’t Good Night Sleeps material anymore.

Reader: So mature, as in not stay up all night. I heard you have something coming up. Something with the National Anthem and the Twins?

CS: Yeah, on the (April) 11th I’m singing the National Anthem for the Twins season opener. I think that’s what it’s called. I’m not a sports person.

Reader: How do you end up getting asked to do that?

CS: They just reached out to me and it was really funny. I was like, “yeah, totally, of course!” There was someone in the Twins office who was a fan of mine. I told them I’d love to. When it was announced, I was freaking out. My mom was like, “you’re singing the National Anthem? That’s huge, it’s sold out!”

Reader: So have you been going over it so you don’t screw up?

CS: No, I know the National Anthem. But sometimes that’s the shit you mess up, something you know really well. It will be good, I’m excited. I was in four choirs in high school and all of the musicals and before every game we had to sing the National Anthem.

Reader: I’ve been listening to some of your last album “Half About Being A Woman.” Tell me a little about feminism and women’s empowerment in some of your recent music.

CS: That all came super naturally. I wasn’t trying to make this feminist record, I was just trying to make a record that was the truest and most honest to me. I grew up with a single mom who owned her own business and had a rough go of it at life but always persevered and led by example that you can do anything you really want. She’s always been my number one fan, but it was beautiful to see how that resonated with other women.

Reader: I noticed that two tracks that I’ve heard, “Magazine” and another where you’re featured with Lizzo seem to get into body image.

CS: That sadly is an issue that is not unique to me and every woman deals with that. The images that we’re bombarded with in our culture every single day: “you’re not skinny enough, you’re not tan enough, you’re not pale enough, you’re not this, you’re not that.” I think Lizzo and I share that a lot. As women in the music industry, we’re constantly told we should look this way or don’t look enough that way. We wrote the song and it wasn’t a play or a strategy. She had actually gotten a really cruel comment on her Instagram while we were hanging out in the studio together and from that the song was begotten.

Reader: I noticed that you may have started out more folk and indy but now it seems that you’re more R&B and pop. I noticed that you started out playing guitar but now there’s a lot of keys. Can you tell me about the transition of maybe being more of a folk artist then going into your newer material? How did that songwriting process work out for you?

CS: I still play electric guitar now. It was really natural. I grew up listening to what a lot of 90s kids listened to like Justin Timberlake, Whitney Houston, Mariah Carey, what was on TRL, you know. When I got into high school, that’s when I started to listen to alt and indy music, back in the Myspace days. I’ve always wrote pop songs but I was writing more folky songs because that’s what was more en vogue at the time. Think about the music you created when you were 18 and then you think “I don’t want to listen to music like that anymore but I’m stuck.” I have all of these fans that really appreciate it and I appreciate them. So I tried to write another Good Night Sleeps record and I was just not happy with it at all. At the same time I started writing these other songs that I was having so much fun writing. I was writing on the piano, I was producing and playing around thinking it would be something for another project. My band heard it and said, “this sounds like you. This sounds like the Caroline that we know.” We started working on the new record and dropped The Good Night Sleeps. It’s just like, “this sounds like you. This is your new solo album.” It was super organic and easy but I thought, “shit, man, if my fans don’t like this I’m going to be so sad,” and they ended up liking it! It was so awesome. I’m glad I had the courage to do that.

Reader: From what I’ve seen it looks like there will be a good show coming up and I know you’ve played up here before. Do you have any connection to the Duluth area?

CS: No, but coming from Detroit Lakes a lot of my class mates ended up going to Duluth. I went to school in Minneapolis.

Reader: Anything people should know about your show coming up?

CS: It’s going to be really fun. I’m going to have my back up singer with me. The Red Herring is always really fun for us because it’s a small room and it gets really packed. I’m going to be DJing an after party downstairs and I’m really excited about that. My friend Dizzy Fae is going to be opening. She’s a really cool artist from Minneapolis.

Reader: Anything else you’d like to add before I close this up?

CS: Yeah, in a few days I’m releasing a new single called “Giving Myself Away.” It will be on iTunes and Spotify.