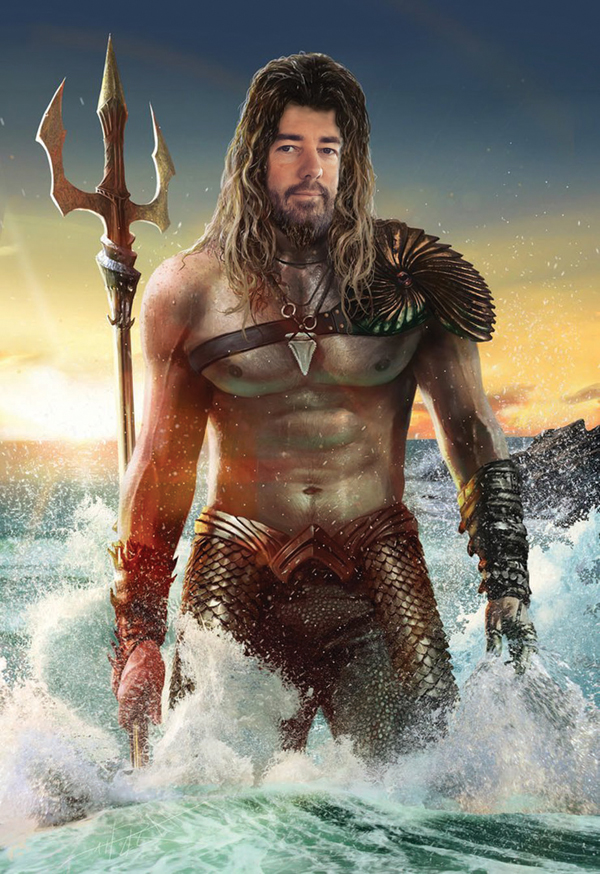 April 1-Duluth, MN: Early Thursday morning a Coast Guard cutter sighted a large bull-shark two-hundred miles west of Isle Royale heading quickly inland towards Duluth. “This is rare. This is unheard of. These sharks can live in freshwater, but coming this far as this time of year is practically impossible,” said Captain Zachary Simon of the Coast Guard.

Back in Duluth, residents are deeply concerned. “I like looking for agates right on the water because the water makes them look the coolest,” said Gregory Merryweather of Duluth. “I don’t like sharks or things that bite, so I might go out less often than I already do. Collecting rocks was definitely a highlight of my summer, but not with sharks around.”

A last minute City Hall address was set up with Mayor Emily Larson and those of the Duluth City Council. “I all know what you’re thinking. We all know what Don said about sharks when he was Mayor. He was joking, ok? My assistant who is advising me will know what to do, right?” Larson looked at her assistant and they shrugged and shook their head. “Why did I waste taxpayer money hiring you? You can’t even handle a little shark crises.”

The room was quite for a moment at the outburst and then a voice arose, calm and steady as if demanding authority, “did someone say shark?”

“Mayor, I mean Don, what happened to your face?” asked Sipress.

Don sighed and looked across the room with heavy eyes, “When someone has seen the kind of things I have after two terms as mayor, once they’re free, not shaving everyday is kind of nice. But, no one answered my question.”

“You don’t understand, these water beasts found out I’m no longer mayor, they were waiting this whole time to unfold their plots of unspeakable bloodshed along our coastlines. I may no longer be mayor, but I gave an oath to the people of Duluth and to everyone in the Northland, I would step up to any shark crisis...AND I WILL END IT!!!” The room again stood in silence, then a clap rang out and then another. The claps rose into cheers. Larson looked around the room, then looked at Don, “alright, Don, you can have your shark, but I’m coming with you.” “Me too!” shouted Joel Sipress.

“Alright, but you just follow my lead. I don’t want any complications. I’ve got this. You hear me?” The words were not out of Don’s mouth before the City Hall chambers were filled with alarms for a high security alert.

“Nevermind right now, John,” said Don looking intently at the glowing display. A video feed linked up on the display. “Sir, this is Captain Simon with the Coast Guard and there’s someone out there with the shark. He’s fighting it...He’s...BOXING IT!!! It’s Chuck Horton sir! It’s CHUCK HORTON!”

“It can’t be,” said Don with a scowl. “That idiot! He has no idea on how to handle a shark crisis! He’ll get us all killed! To the Mayor Cave!”

“Wait? Mayor Cave?” said Mayor Larson and Ramos in unison. Larson’s assistant looked down as if embarrased. “Yeah, that’s the last thing I was supposed to mention to you as your advisor, Emily.”

Once in the Mayor Cave, Don, Larson and Sipress all fitted into specially designed dry suits and equipped themselves out of the anti-shark arsenal of weapons the Don had been amassing for a number of years. “So you actually had a plan to fight sharks?” asked Larson.

“Of course, didn’t you? Herb Bergson used to just come down here to drink with his friends but since the place was kind of ridiculously gigantic, I figured I’d do a few things with it,” replied Don.

Out of the intercom shreiked, “Horton is tiring out! He’s gone eight rounds with that shark and he’s losing it! He can’t hold on!”

“Get in and hold on tight,” said Don with smooth assurance. The Mayor boat is capable of achieving speeds over 300 miles an hour. In minutes the craft approached Horton and the shark.

“Take the wheel, Emily!” shouted Don as he unstrapped himself from his seat and opened the boat’s cock-pit. Don picked up a trident and leaped out of the craft as it sped by doing around 150 miles an hour. He landed perfectly with a trident plunging through through the sharks head forcing it to release Horton in a gush of both the shark and Horton’s blood.

“Don! I knew I should have left it to you,” cried Horton.

“Don’t worry, Pal. I take things as they come,” said Don in a calm, yet gruff manner.

Don helped Horton into the boat just as Sipress noticed something on the ship’s air radar. “Don, there’s crafts in the air above us! They’re moving in!” shouted Sipress. Less than a mile ahead the sky open up with gigantic slowly moving crafts that hovered menacingly over the bay. Large bay doors opened up and bright beams of illuminated energy began to drop hundreds of full grown sharks into the lake below.

“Don, could this be?...” Larson started to say. “Jim Carlson? It must be. But he’s behind bars and how did he get into contact with...Wait! We have to get back! Get a call to Chief Gordon Ramsay right now!”

“Call him now Joel! CALL HIM NOW! Or we’ll all doomed.”
All contact was lost with Don, Larson, Sipress, Horton and the nearby Coast Guard vessel after that final transmission. Several disappearances have been reported along the coastline.

In Wichita, Kansas, Chief Gordon Ramsay got a hold of the news that Don was in need of his assistance. “I knew I shouldn’t have left,” muttered Ramsay. “I’m coming back, Don. You hold on boy former mayor.”