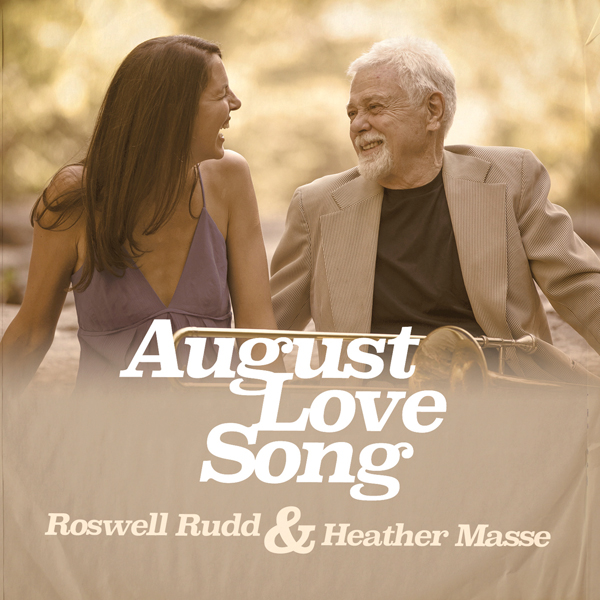 At first blush, it seems a truly odd pairing: a youngish vocalist with a voice so pure and lovely that angels hear her and say “I wish I could sing like that;” mixed with an 80-something free jazz trombonist who made his mark playing with avant garde jazzers like Archie Shepp, Cecil Taylor and The New York Arts Quartet.

This teaming appears to be madness, except that being consummate pros, Heather Masse’s incandescent vocal lines and Roswell Rudd’s tailgating trombone
intertwine like a couple of vipers  making love and together create brilliant music on their brand new Red House release “August Love Song.”

Masse says of the teaming “Roswell and I found a blend and a presence with each other that, at its core, is like two voices listening and connecting with each other.”

Duke Ellington’s “Mood Indigo” gets such a bluesy, mournful treatment that it feels like you’re being dragged headfirst through the mud on the way to the work farm. Rudd’s intro has Duke’s “It Don’t Mean A Thing” woven into a mural that sets up Masse who channels the melancholy of Lady Day throughout “I’m so lonesome I could cry.”

Masse and Rudd met when they both appeared on “A Prairie Home Companion.”

The realization that the pair lived only 8 miles down the road from each other in New York’s Catskill Mountains, led to weekly jam sessions in Rudd’s living room. Each seemed to both stretch and compliment the other in ways that neither would have expected.

The title track was written by Masse, not for the month per se, but for her 3 year old son August (probably born in that month).  This tune has a gentle lilt with lyrics that have that ravishingly beautiful glow that comes from the special kind of love that only a mother can feel for her child.

Masse’s day gig is as a member of the award-winning group The Wailin’ Jennys. She’s also performed with the bluegrass bands The Wayfaring Strangers and Joy Kills Sorrow, and with fiddle virtuoso Mark O’Connor’s Hot Swing. Her voice, and I have experienced this first hand in a “live” session for radio, is one that can simply light up a room in a way only a handful of very gifted vocalists can. Masse’s voice can be hushed and tranquil one minute, then searing and seductive the next. It’s a musical instrument that has to be heard to be fully appreciated.

“Blackstrap Molasses,” an a capella soliloquy written by Masse, provides a graceful and dramatic intro to the old standard “Old Devil Moon.” The quartet swings this classic tune so hard, driven by the supple rhythm section of bassist Mark Helias and guitarist Rolf Sturm, that Masse and Rudd can ride on their bottom end all night.


Dizzy’s “Con Alma” is taken at a solemn pace and features a nuanced guitar intro, dissolving into Rudd’s quixotic phrasing. It has a hymn-like quality that would be perfectly suited to inclusion in a Sunday morning service.

Rudd, known as “The Incredible Honk,” came up through the trombone tradition of greats like Jack Teagarden, Kid Ory and J.J.Johnson. His career has included working with world musicians and writing jazz operas. The beauty of Rudd’s playing on “August Love Song,” is that he doesn’t just dribble all over the music like many trombonists. Every note seems to have a place that is meaningful and
significant. There is a fragile but visceral relationship here between voice and trombone.

George and Ira Gershwin’s “Our Love Is Here To Stay” is the perfect closer for this project that was made the way music, at it’s best, is made: with lots of love all around. This is a recording created by skilled artists who simply want to share the joy of making superb music together.