Joe Fahey has been playing in bands in the Minneapolis area since 1979. He was a regular act with his group Carp 18 at venues such as 7th Street Entry, 400 Bar, the Cabooze, and other stages since the early 90s. He has released three solo albums since 2006 including his latest release “Somnambulist Chaser,” put out just last week.
At a glance of the cover art and a title like Somnambulist Chaser, it looked like this album might be kind of dark and heavy. I put on the first track and found the upbeat intro song of the album to be not quite I was expecting. The track “Spring Forward (Fall Back)” is exactly what the title implies. “Spring forward, fall back, they take away an hour and give it back,” sings Fahey in the opening line. The song has the feel of The Dead Milkmen or They Might Be Giants with it’s light hearted, somewhat humorous, playful surfish-punk. “You can blame it on Ben Franklin who figures he’d be the one/So he could see his friends, girlfriends, and take off at a quarter to one.” This brief and quirky history lesson was not what I was expecting.
It seemed somehow relevant that Fahey released the album right around Daylight Savings with that track, but it made me wonder where he was going with it. When looking at the back of the CD case, I noticed that the tracks are listed as Side One, tracks 1-7, and Side Two, tracks 8-15. Most of the time CDs don’t have sides so to make the point to indicate the separation seemed important. The beginning of “Side Two” starts with the track “Fall Back (Spring Forward)” and it is not particularly happy nor as literal as the first track. It seems like Fahey is now making a metaphor out of “falling back.” As in there are dark times in life that one must go through before coming back into the light. “You’ve got to fall back before you spring forward/Buckle down for the darkness that will darken your doorstep/As you fall back/As nature intended/Keep a light on for me/Keep the fire tended.” The final 40 seconds of the less than two minute song consists of eerie ambient noises.
It’s safe to say these two songs that are related by title are quite different and this plays out through much of the album. There are a number of moods and genres portrayed in the songs, but they work together as a whole for a general feel of the album. It’s also safe to say that album doesn’t have anything to do with chasing people who sleepwalk as the title may suggest. 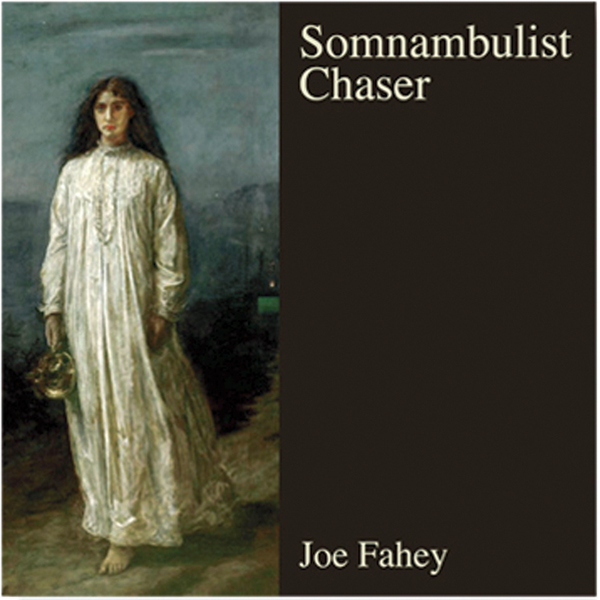 The songs vary from laid back groovy songs like “The Drunken Prisoner Of Circumstance” where Fahey goes on a lyrical free flow, which is fitting for this song that comes off as a sort of jam with some purposefully erratic jazzy lead guitar and a smooth horn section towards the end that break up the unusual verses. “Now these deep inhalations/Of ??? air/Followed by lightening bolts of increased production/Seem stymied by the overflow of lackadaisical direction/The spongy bobbins of indecision and reverse dexterity/And the fact I no longer dance/At last I’ve become the drunken prisoner of circumstance,” go the lyrics of the final verse.
With songs such as “Somewhere To Go,” Fahey goes with what I’d consider a more traditional approach for a singer-songwriter. This light folk-rock song has a little country twang with the pedal-steel and follows a fairly standard verse-chorus layout. “Wouldn’t it be easy to wake up and have a cup of joe/Read about the hollywood harlots and check out the baseball scores/And have someplace to go,” Fahey sings in the chorus accompanied by Jennifer Markey as backing female vocals.
Things keep switching up with tracks like “Stable Wounds” which has the sound of a lost slow and somber Lou Reed song. The song “Bon Bon For Algernon” is perhaps the most upbeat aside from the intro song with a steady pop rock style arrangement of catchy and fluffy choruses and guitar leads.
The last two tracks are a little different as in the recordings are rougher. The song “One More For The Road (Final Take)” opens with with Fahey stating the song’s title and that it is the “final take.” How does he know if it’s the final take? What if someone really screws up and they have to do another take? Or did they just call each track the final take until it actually was the final take? The final track on the album, “How to Leave a Room,” was recorded at a place called The Treehouse and from the looks of it it is shown in a picture on the back of the album with Fahey sitting with an acoustic guitar by an older looking reel-to-reel tape recorder. They left in a little sloppiness of punching in on the recording with a little snip of a previous recording and the soft hiss of the tape can be heard. It’s an interesting way to end this album, almost as much so as the way the album begins.
While Fahey is indeed a singer-songwriter, he certainly has a way of being rather diverse with his approach throughout this album. There are a number of songs that fit a meaningful alternative folk-rock album to a tee, but Fahey swings back and forth between sentimental and deep to humorous and open. There is plenty of soul-searching and acknowledgment of past hurts in much of the lyrics, but the album isn’t totally hung up on that. The intro tracks to both of the “sides” of the album express the lengths of songwriting that has been put into this material.