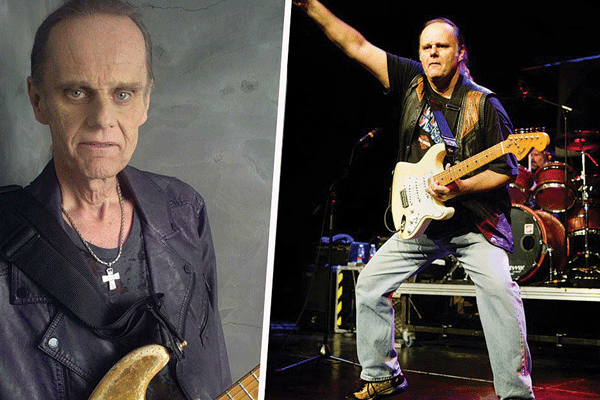 Walter Trout’s story is the kind some Hollywood screen writer might dream up for a Hallmark channel movie extravaganza.

Born to a music-loving mother who arranged a 10th birthday party that included meeting the great Duke Ellington and members of his band; moving to L.A. and an early career that included playing guitar behind blues legends John Lee Hooker and Big Mama Thornton; joining Canned Heat in 1981 and then adding his name to the impressive guitar lineage of John Mayall’s Bluesbreakers; everything Trout touched was golden.

In 1989, Trout went out on his own and has led either the Radicals or the Free Radicals for a quarter century. He was flying high when his record label (the Netherlands-based Provogue Records) organized a marketing campaign to make 2014 “the year of Trout.” But early in the year, while he was recording “The Blues Came Callin’” it was officially announced that Trout was suffering from severe and debilitating liver disease hepatitis C. He spent 1 month in the UCLA hospital, unable to move, speak or even recognize his own children. He spent another 5 months in the Nebraska Medical Center in the liver ward where the minutes ticked by with glacial slowness while he waited for a donor.  It took a life-saving liver transplant on Memorial Day of 2014 that began the slow process of returning to the living.

The songs on his new release “Battle Scars” are born of that face-to-face with death, and by God they have the power that you might expect would come from that kind of harrowing meeting.

“Almost Gone” gives horrifyingly tactile voice to the feeling Trout had lying in his hospital bed hearing families in the hall crying for a loved one who had lost the fight. “Can’t help but feelin’ I won’t last too long”….yipes, forget the whiny nost nasal drip that most blues artists sing about, this is the deep-down, real low-down, real as a real deal gets, blues.

The simmering acoustic style of “Gonna Live Again” is Trout asking God “Why me?” It’s clear that he’s not asking selfishly “why did this happen to me” but rather “with so many people dying right outside my hospital room”, “why did I survive and get a chance to live again, when others did not?” That’s a hell of a question for anyone to have to grapple with; but Trout wrestles it to the ground.

“Omaha” is the unblinking story of a man haunted by death with all the colors and hues that brings.

Lest you imagine that this record is an unlistenable series of gut-wrenching soliloquies, actually come to think of it…it is that, but it also virtually glows with the positive vibe of a man given a second chance as a musician, a husband, a father, and as a human being. This man is immensely grateful to the many people who contributed almost a quarter million dollars to offset his medical expenses, and a man who is going to give every ounce of himself back to those people and his many listeners. The exaltation of the music offsets the darkness of the lyric in what at times alternates between uninhibited bleakness and radiant euphoria all within the context of full-throttle blues.
If what you look for in a new project is the crescendo of heartfelt emotion, well brother then lash yourself to the mast and strap in, because this is the record that will send chills down your spine and make the hair on the back of your neck stand on end.

There is a breathtakingly pure feel to the tracks and an underlying sense of unapologetic optimism completely devoid of artifice.

No matter how you slice it, with all the tons of new releases out there, and remember “it’s a big world of music out there,” this is one release that you will feel to the bone.