PolyMet Mine Would Be Disastrous for Minnesotas Arrowhead Region 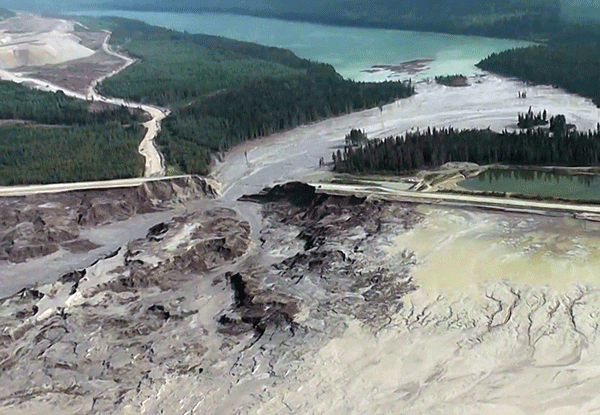 Failure of the Mount Polley tailings basin in British Columbia destroyed everything in its path,  also placing populations of Chinook salmon and rainbow trout at risk. (Source: Cariboo Regional District)

“PolyMet in conjunction with MNDNR and MPCA have designed short-term pollution mitigation schemes in order to obtain long-term water and air pollution permits for the proposed NorthMet Mine project.  They are asking to use ‘Trial and Error’ resource management methods to ‘manage’ irreversible pollution from acid mine drainage.  This should not be permitted in the Lake Superior watershed,” said Le Lind of the Save Lake Superior Association.

“It is hard to imagine a more stupid or more dangerous way of making decisions than by putting those decisions in the hands of people who pay no price for being wrong.”

On February 27, 2016, Governor Dayton hosted a Water Summit, at which he urged us to establish an ethic of clean water practices.”This should be our ethic and every Minnesotan’s responsibility, and anything less is unacceptable.” Five days later, on March 3, Department of Natural Resources (DNR) Commissioner Tom Landwehr, who was appointed to that position by Governor Dayton, declared the Environmental Impact Statement (EIS) for Minnesota’s first proposed sulfide mine as adequate.

By declaring the proposed PolyMet sulfide mine EIS to be adequate, the Minnesota DNR has announced its willingness to poison the waters for all those living downstream in the St. Louis River watershed. The DNR’s statement of adequacy is neither ethical nor adequate.

Sulfide mining leaves behind a legacy toxic trail of leaching heavy metals and acid mine drainage pollution. The record is clear in the arid western regions of this country, and the devastating environmental impacts will be much greater in the water-rich wetland environment of northeast Minnesota.

To make matters worse, the DNR has allowed PolyMet to develop a mine plan that cuts costs, in order to make it profitable to mine the low-grade, highly disseminated sulfide ores of the Duluth Complex formation. Mining metals from these ores results in 99% waste material, with mountains of leaching waste rock piles, and tailings.

Large-scale catastrophic mining disasters have been increasing. Although not well-covered by Minnesota media sources, these include major tailings basin failures at the Mount Polley Mine in British Columbia and the Samarco Mine in Brazil. The DNR should reject PolyMet’s EIS for this reason alone--the danger of layering thousands of tons of sulfide-bearing waste on an already unstable, leaching tailings basin. Financial assurance for mine clean-up upon closure, which is not addressed in the EIS, would never be enough to cover a major mine disaster, potentially adding up to billions of dollars. Instead the DNR is willing to transfer long-term financial risk to the tax-payers of this state and the citizens of the future.

The DNR has minimized the fact that water from PolyMet’s proposed mine site would need to be treated for at least 300 years post closure, and the plant site for at least 500 years--or indefinitely, in their terms. It is irresponsible on the part of the DNR to place this kind of burden upon the next 25 generations. 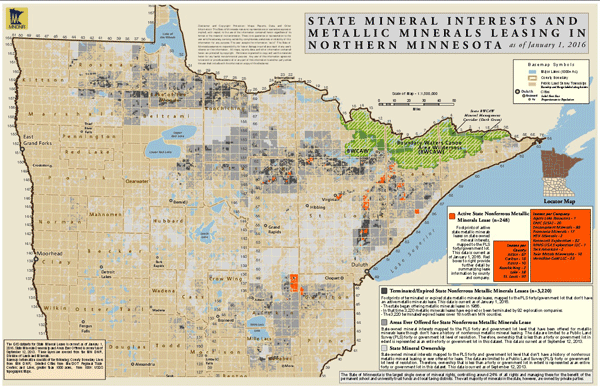 After 10 years of environmental review, water modeling for the proposed PolyMet mine is still questionable. Instead of addressing public and Tribal concerns regarding significant environmental impact inconsistencies, the DNR has chosen to rush the EIS process to a close and declare it adequate. As evidence of this, the public was given a short 37 days in which to comment on over 3,500 pages of material. The PolyMet EIS has buried the real problems of sulfide mining within a conceptual framework of wishful thinking (no problems will occur), promises (all pollution will be cleaned up or treated), adaptive management (any unforeseen problem will be immediately reported and fixed), along with computer-generated charts and graphs, much of which are based on faulty modeling. Despite the huge amount of paperwork, the DNR still doesn’t know whether contaminated ground water would eventually flow into the Lake Superior or Rainy River basins--ultimately polluting both internationally important watersheds.

The PolyMet EIS gives a sanitized version of the impacts of sulfide mining upon the land, the water, and the people. By endorsing the EIS, the DNR is ignoring both the use and pollution of water by mining operations, and the value of clean water as a natural resource. The EIS allows PolyMet, a foreign mining company, to use our water resources, drain our aquifers, alter water flow, and then claim that any treated water is cleaner than the natural water sources consumed during mineral processing.

Against the mission of the DNR

The DNR is a conflicted agency. Before a decision on the PolyMet EIS was even announced, the Lands and Minerals Division of the agency began testing for possible gold in bedrock near Tower and Soudan, neighboring the newly being-developed Vermilion State Park. This demonstrates a conflict of interest within the agency. The Lands and Minerals Division of the DNR’s jobs are dependent upon promoting mining.

The DNR is also operating under intense political pressure from the Iron Range delegation to approve PolyMet. Politics is about the short term. Politicians dangle the promise of good paying jobs upon their voting constituency. Political and regulatory promotion of a mining economy keeps us locked into the boom and bust cycles of the global minerals market.
The Iron Range delegation has worked to weaken environmental laws in order to subsidize low-grade mining. On the one hand, politicians claim that mining should be done here where we have strict environmental laws; while on the other hand, they weaken those  laws to make us on par with third world countries. Also, the DNR and other state agencies have repeatedly failed to enforce existing laws and regulations. Laws and regulations only matter if mining companies are required to abide by them.

Both the politicians and the DNR are ignoring the health impacts of sulfates, mercury, lead, arsenic and other toxic metals in our environment. Already 10 percent of babies born on the North Shore have high levels of mercury in their blood. Already there are fish advisories on most northern Minnesota lakes, advising people to eat fewer fish due to mercury contamination.  Mining pollution impacts all of the aquatic organisms in the watershed, and all life that depends on those organisms for food, thus impacting fish, birds and wildlife that feed on fish, and ultimately, the human population. Also of concern is the loss of wild rice as a food source. Cumulative impacts upon our health and our environment have not been addressed, while everyone living downstream will be affected.

The PolyMet EIS also ignores potential air pollution and harm from asbestos-like mineral fibers in the rock formation that will be crushed, ground and dispersed - even though the rates of cancer, lung & bronchial and auto-immune diseases are high in the adjoining taconite mining area.  Clean water, clean air, and a healthy environment are necessary resources for  us and for future generations. We ignore health impacts at our own peril.

PolyMet is being used as the “snowplow.” PolyMet openly speaks of excess processing capacity at its plant, and preliminary Twin Metal’s plans show waste and processing being directed into the Lake Superior watershed. On March 2, with minimal public announcement, the state Minnesota Executive Committee approved a new batch of sulfide mineral exploration leases in outlying areas across the Arrowhead Region. Once our agencies determine that sulfide mining can be done “safely” in the Arrowhead’s water rich environment, what is now Superior National Forest will be turned into a toxic industrial mining zone, with other mining companies waiting in the wings.

Mining jobs will be subsidized by environmental destruction, while existing jobs in tourism, recreation, fisheries, and forestry, which are dependent upon forests and clean water, will be lost.  The headwaters of Lake Superior and the Rainy River, both of which are international watersheds, will be debased.

State and Federal agencies are also quietly doing preparatory work ahead of projected sulfide mining. Huge tracts of state and federal forest along Highway 1 & 2 are being cut ahead of mineral exploration and mining. Highway 1 & 2 and Highway 169 are both being widened ahead of proposed sulfide mining plans. Changing of the landscape, reducing the diversity of the ecosystem, and reduction of certain wildlife populations ultimately changes people’s perception about the value of the area. Thus the ultimate destruction caused by mining is easier to accept. 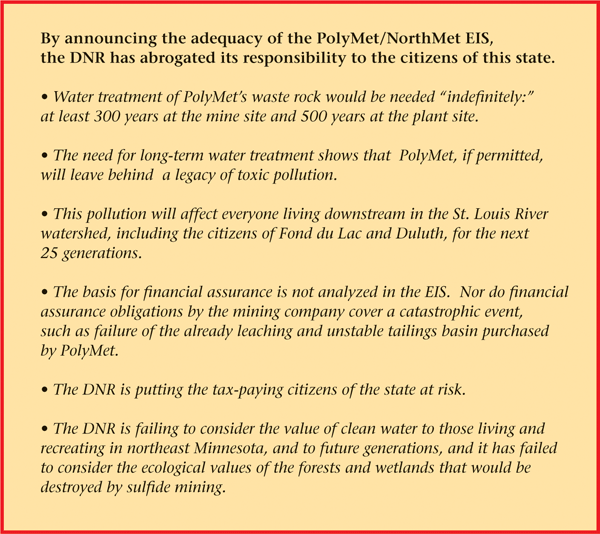 Process not over yet

What is next in line for the proposed PolyMet mine?  Multiple mine and water permits still need to be issued by the MPCA and the MDNR, the EPA has concerns that must be addressed, the USFS must make a final decision on the land exchange, the Army Corps must approve the destruction of 1,00 acres of wetlands (404 permit) -   and legal challenges will undoubtedly follow.

Our state has already allocated $750,000 to hire the Crowell & Moring mining company law firm out of Washington, D.C. to defend the deficient EIS mine plan from legal challenges. Crowell & Moring has previously represented a foreign mining company against California and U. S. law in a NAFTA case (Glamis Gold Ltd v. United States of America, http://www.state.gov/documents/organization/125798.pdf). It appears Minnesota’s government is so desperate to promote mining that it would be willing to allow international deals to supersede state and federal authority and laws.

If permitted, PolyMet will leave a legacy of water pollution for centuries and open the door for widespread degradation of the Arrowhead Region and St. Louis River watershed. In the meantime, Governor Dayton and DNR Commissioner Landwehr will have left their positions, other politicians will come and go, and agency career staff will remain anonymous within the bureaucracy. They will not have to pay the price for long-term harm done in exchange for short term interests.  Those costs will be left to us.

Article submitted on behalf of Save Our Sky Blue Waters, the Save Lake Superior Association, Friends of the Cloquet Valley State Forest, and Wetland Action Group--northern Minnesota groups advocating for protection of the environment.

“The PolyMet EIS is a sanitized version of the impacts of sulfide mining upon the land, the water, the wildlife and the people.  By endorsing the EIS, the DNR is ignoring both the use and pollution of water by mining operations, and the value of clean water as a natural resource,” said Elanne Palcich of Save Our Sky Blue Waters. “The health of our environment and our people is directly related.”